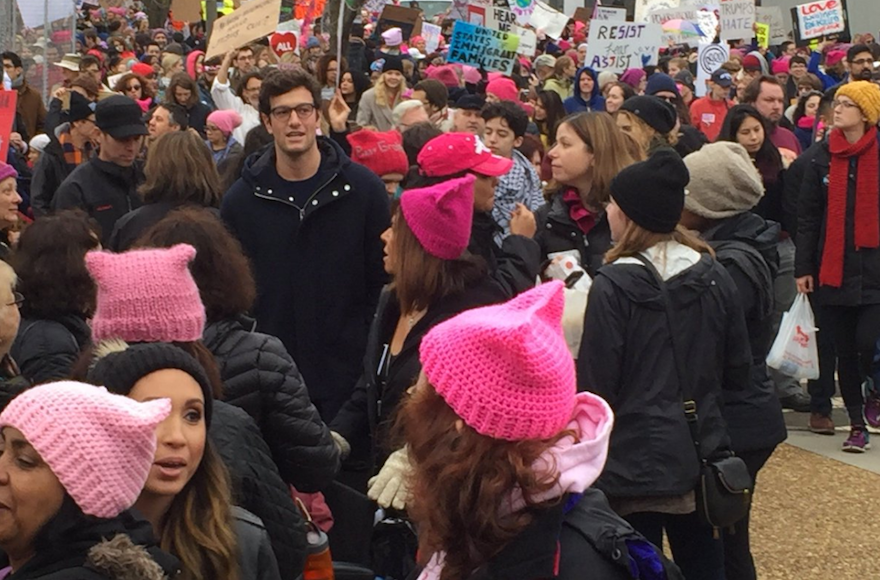 (JTA) — Joshua Kushner, the younger brother of President Donald Trump’s son-in-law, was spotted at the Women’s March on Washington.

A photo of Kushner was posted on the website of the monthly Washingtonian magazine as part of a post showing “Scenes from the Women’s March on Washington.”

Among the men at the #WomensMarch: Joshua Kushner, brother of White House senior adviser Jared. (Photo by @jsidman.) https://t.co/1zeAx318qt pic.twitter.com/FtALNYlvvF

He told fellow marchers who recognized him as the brother of recently named White House advisor Jared Kushner that he was just “observing” the march.

Joshua Kushner, 31, reportedly is a life-long Democrat. His longtime girlfriend Karlie Kloss posted a photo of herself on Instagram filing out an absentee ballot and hashtagged #ImWithHer, ostensibly for Hillary Clinton. A venture capitalist, his businesses could be hurt by his brother’s position in the Trump administration, according to reports, including investment in a company  which sells health insurance to individuals under President Obama’s Affordable Care Act.