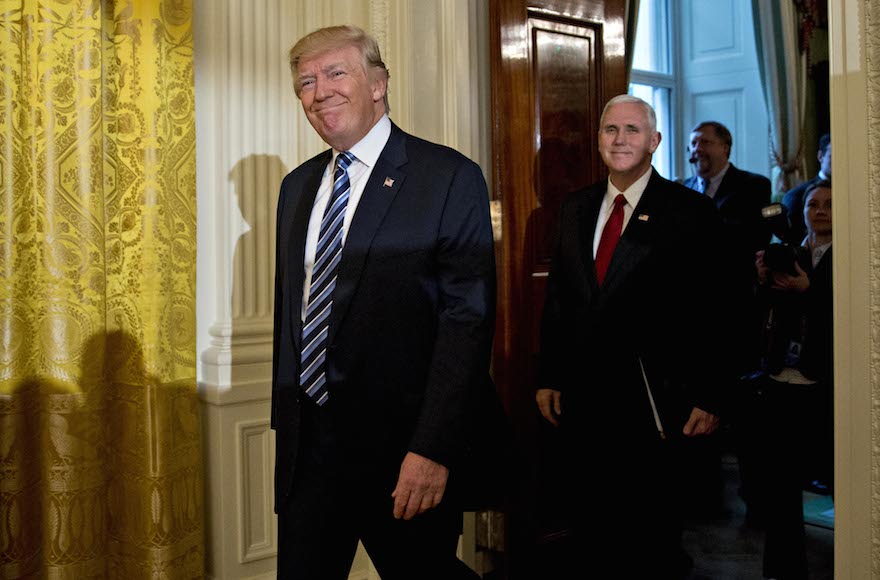 President Donald Trump, left, and Vice President Mike Pence at a ceremony to swear in senior staff in the East Room of the White House, Jan. 22, 2017.(Andrew Harrer/Bloomberg/Getty Images)
Advertisement

Trump made his comment Sunday afternoon when asked by reporters following a White House swearing-in ceremony for some Trump administration advisers. The leaders had spoken earlier in the afternoon.

A statement released from the Prime Minister’s Office described the interaction as a “very warm conversation,” and said the leaders discussed “the nuclear deal with Iran, the peace process with the Palestinians and other issues.”

“The Prime Minister expressed his desire to work closely with President Trump to forge a common vision to advance peace in the region, with no daylight between the United States and Israel,” the statement said.

Trump invited Netanyahu to come to Washington in February to meet with him, according to the statement.

Earlier in the day, Netanyahu said when asked what subjects the leaders would talk about: “There are many issues between us including the Israeli-Palestinian issue, the situation in Syria and the Iranian threat.”

Prior to the phone conversation, Netanyahu reportedly told his Security Cabinet that he would lift restrictions on building in eastern Jerusalem, and that he would soon announce West Bank settlement bloc expansion, The Times of Israel reported.

Also Sunday, Israeli government ministers postponed a vote on annexing the large West Banks settlement of Maale Adumim after agreeing to wait to decide on the issue until after Netanyahu and Trump meet.

The Ministerial Committee for Legislation on Sunday agreed to wait to vote on the proposed bill, which would subject the settlement to Israeli law, thereby annexing it.

The international community and the Palestinians argue that making Maale Adumim an official part of Israel will prevent the formation of a Palestinian state, since it would prevent territorial contiguity.

Netanyahu on Friday called on Education Minister Naftali Bennett, head of the right-wing Jewish Home Party, to postpone discussion on the bill, saying Trump’s advisers had asked him to hold off, and asked that there be no unilateral steps taken by Israel prior to a Trump-Netanyahu meeting.