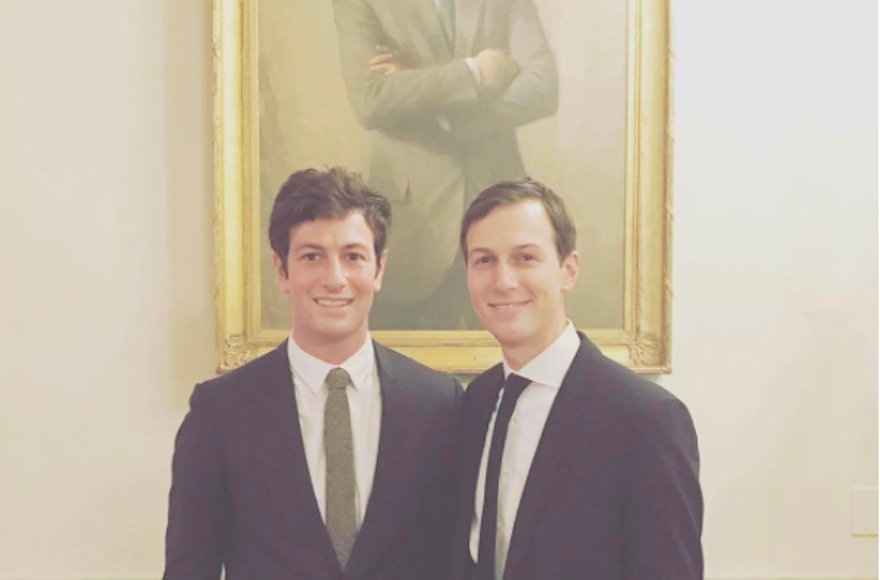 Joshua Kushner, left, with his brother Jared in the White House. (Instagram)
Advertisement

(JTA) — Joshua Kushner, the younger brother of President Donald Trump’s son-in-law, posted on Instagram a photo of himself and his brother Jared at the White House taken the day after he was photographed at the Women’s March on Washington.

Joshua Kushner posted the picture with his brother on Sunday in front of a portrait of John F. Kennedy as his photo on the National Mall amid a crowd of protesters went viral.

“Josh was at the White House with his family today to watch his brother being sworn in,” a source close to Joshua Kushner told BuzzFeed News. “Yesterday, he took a quick walk near his hotel, and someone took a picture of him.”

The photo of Kushner was first posted on the website of the monthly Washingtonian magazine as part of a post showing “Scenes from the Women’s March on Washington.” According to the post, Kushner told fellow marchers who recognized him as the brother of recently named White House adviser Jared Kushner that he was just “observing” the march.

Jared Kushner was sworn in along with several other White House advisers on Sunday.

Joshua Kushner, 31, a venture capitalist, reportedly is a lifelong Democrat. His businesses could be affected by positions taken by the Trump administration, according to reports, including investment in a company that sells health insurance to individuals under the Affordable Care Act launched by Trump’s predecessor, Barack Obama.