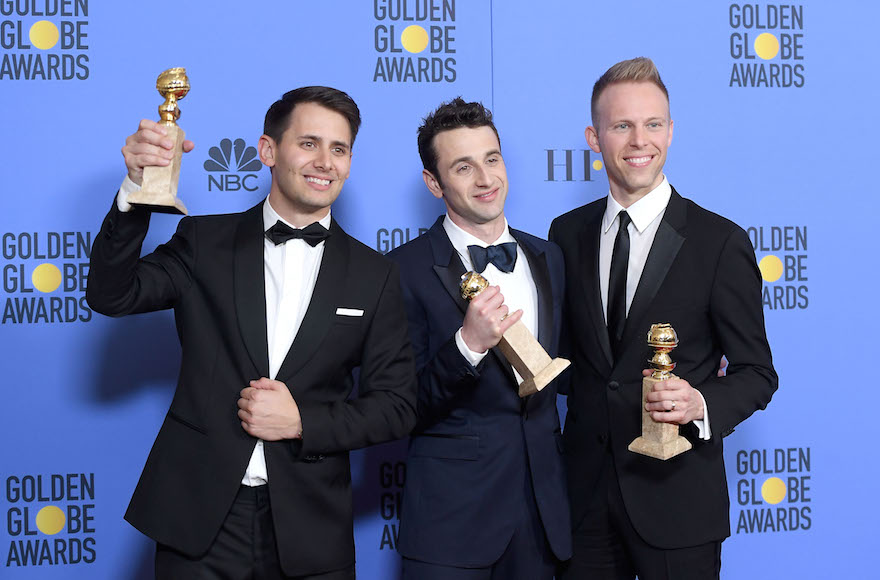 LOS ANGELES (JTA) — “La La Land” received a record-tying 14 Academy Award nominations, including for its music written by a Jewish composer, and Jewish actors including Natalie Portman and Andrew Garfield also were nominated.

The Oscar nominations were announced Tuesday morning. “La La Land,” which is up for best picture, director, actor and actress, ties the mark set by “Titanic” and “All About Eve,” thanks mainly to two former Harvard roommates, Justin Hurwitz, 31, and Damien Chazelle, 32.

Jewish composer Justin Hurwitz wrote the songs for the musical film, including “City of Stars,” which was nominated for the Oscar for best original song. Benj Pasek, who is Jewish, and Justin Paul wrote the lyrics.

Director Damien Chazelle, who was a roommate with Hurwitz at Harvard, told the Jewish Journal of Greater Los Angeles last year that his parents, although Catholic, were dissatisfied with their son’s education at a church Sunday school and enrolled him in the Hebrew school of a liberal synagogue.

Over the next four years, Chazelle recalled, “I had that period of my life where I was very, very into Hebrew and the Old Testament, and then I went with my class to Israel when we were in the sixth grade. I don’t think they even knew I wasn’t Jewish; I was, like, ‘passing.’”

Huppert, who plays the role of a successful businesswoman who plots an elaborate revenge on the home intruder who raped her, is the daughter of a Jewish father and a Catholic mother. Her parents were married while France was under Nazi occupation, with her father hiding his Jewish roots.

In the best actor category, a nomination went to American-British actor Andrew Garfield, whose paternal grandparents were Jewish emigrants from Eastern Europe to London. He stars in “Hacksaw Ridge,” the story of the only conscientious objector ever awarded the Congressional Medal of Honor.

Somewhat ironically, the movie also won a best director nomination for Mel Gibson, still living down his anti-Semitic outbursts of past years. However, actor and director got along well, with Garfield declaring in a TV interview, “I am proud to be Jewish.”

Also in the running for best director is Kenneth Lonergan for the critically acclaimed “Manchester By The Sea.” Lonergan’s mother and stepfather are Jewish.

The Danish movie “Land of Mine” won a best foreign-language film nomination. Set at the end of World War II in Europe, “Land of Mine” focuses on a group of teenage German prisoners of war who are assigned by the Danish military to clear the country’s beaches of land mines, frequently at the loss of their lives.

“Joe’s Violin” by Kahane Cooperman and Raphaela Neihausen made the cut in the short documentary category. It explores the friendship between a 91-year old Holocaust survivor and a 12-year old Bronx schoolgirl and how the power of music can brighten the darkest of times.

The first spinoff from the Harry Potter film series, “Fantastic Beasts and Where to Find Them,” which features two Jewish characters, received nominations in costume design and production design.

The Israeli film “Sand Storm” failed to make the cut last month to the nine semifinalists out of 85 in the best foreign language film category.

The Academy Awards ceremony will take place Feb. 26 at the Dolby Theater in Los Angeles.