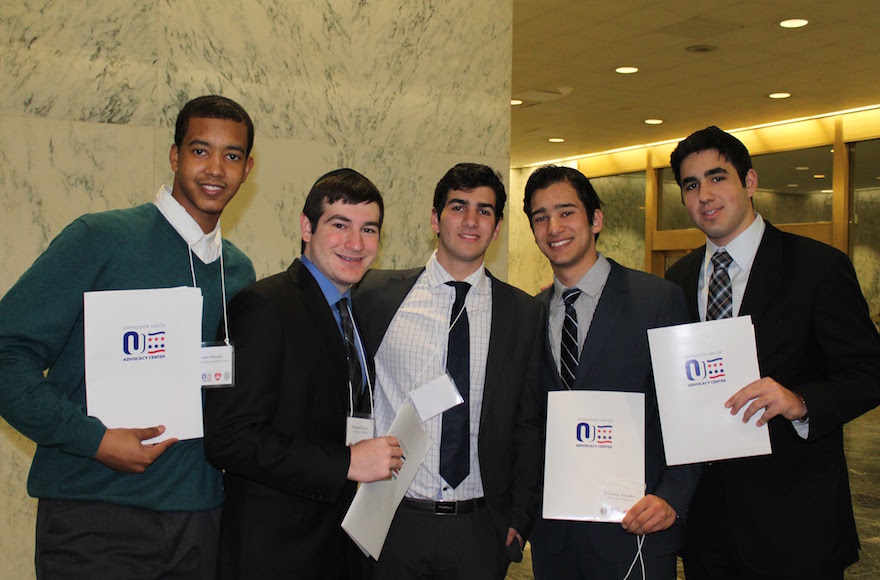 Being an Orthodox Jew can cost a pretty penny.

There are the premium prices for kosher meat, the two sets of dishes, the mikvah fees. There are expensive lifecycle celebrations like brises and bar mitzvahs, and requisite accessories like tefillin ($1,000). The Jewish holidays have expenses all their own: sukkahs, shmura matzah, big holiday meals with lots of guests — to say nothing of the cost of using up vacation days for the Jewish holy days.

Then there are the big-ticket items, like real estate. Orthodox communities tend to be clustered in the nation’s most expensive areas, such as New York, New Jersey, California and Maryland – states where average home prices are in the Top 10 nationwide.

But the single-biggest Orthodox cost of all is Jewish day school tuition.

Some 81 percent of Orthodox parents have a child in day school or yeshiva, according to the Pew Research Center. At many Jewish day schools, annual fees start at around $15,000 per child and surpass $30,000 in high school. That means an average Orthodox family (4.1 children, according to Pew) will pay $1 million in education costs before their kids even reach college.

“This is the single-most important economic issue facing our community,” said Allen Fagin, the chief professional officer at the Orthodox Union. “We are seeing too many cases of parents who would prefer to send their kids to yeshivot or day schools who are opting for public education because they simply can’t afford the cost of day school.”

Even parents who are able to scrape together the money necessary to send their kids to Jewish schools often find they can’t afford much else, noted Cheryl Rosenberg, president of the Ben Porat Yosef day school in Bergen County, New Jersey, and a parent of four children at the school.

“Many families are forced to decide between sending their kids to day school or sending them to drama or art classes or going on a family vacation,” she said. “They have to make a choice between Jewish education over everything else.”

But in recent years Orthodox communities, schools and institutions have expanded their arsenal to fight the tuition crisis, and today they are tapping a host of unorthodox strategies to keep Jewish day school education affordable.

One of the main focal points has been the effort to secure more public funding for non-public schools – a growing campaign that benefits not just Jewish students but any family with a child in a non-public school.

In New York state, which has the largest Jewish day school population in the country, roughly 13 percent of all children attend non-public schools, but only 1 percent of government education funds goes to those students.

In 2011, the O.U.’s nonpartisan public policy arm launched an advocacy network focused on delivering more public funding to non-public schools. In New York alone, that effort combined with others — including private lobbying, public demonstrations and coordinated campaigns — has helped increase the amount spent by the State Legislature on non-public schools from $111 million in 2012 to $345 million in 2016.

The money has gone to a variety of programs eligible for government funding even though they are provided in parochial or other non-public settings: reimbursement for administering state exams, mandatory attendance-taking, textbooks, nursing services, computer software, security, teacher training.

Government funding for private schools isn’t new, but the O.U. says its approach to the issue is novel. The organization has built a network of schools and parent advocates, hired lobbyists and is pursuing a state-by-state strategy to get the job done. The O.U.’s Teach Advocacy Network now operates in six states, all with large concentrations of Jewish day schools.

“We are building a robust network of schools and parent bodies to work on affordability without sacrificing quality, and hiring top lobbyists to go to bat for our students,” said Neil Cohen, a co-chair of the O.U.’s Teach New York effort and chairman of the venture capital firm Emerald Development Managers. “That’s something that no one else has done. We are totally shifting the paradigm of how this work is done.”

While some critics say public funding should not go to non-public schools, O.U. officials argue that their constituents are asking only for what they rightly deserve, not funding for Jewish education, and that the sums they obtain represent only a fraction of what these families are contributing as taxpayers.

“This is about fairness and equity for all children,” said Maury Litwack, director of state political affairs for the O.U. Advocacy Center. “I can’t tell you how many times people assume we are attempting some money grab from the public schools or some violation of church-state separation only to learn time and again that we have advocated for and passed dozens of programs that take nothing away from public education and are constitutionally sound.”

Meanwhile, the money is having a real impact. At Ben Porat Yosef, for example, government funding that will deliver $224 per student to every school in New Jersey this year to cover items like nursing, textbooks and security will result in more than $100,000 for Ben Porat Yosef. An expected $25-per-student increase in security funding is expected to bring in another $10,000 to the school. 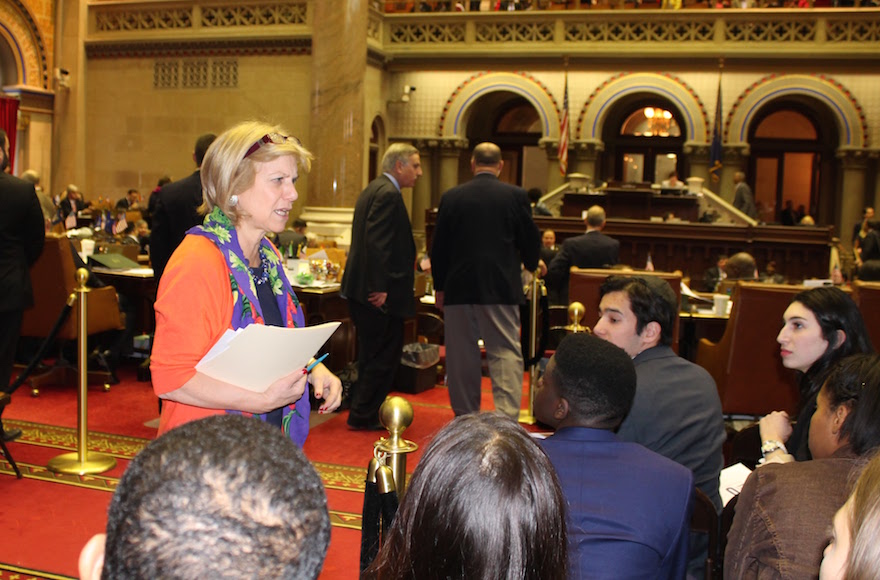 In Florida, non-public schools are benefiting from tax credit incentives that allow corporations to donate to a scholarship fund for low-income students and receive a dollar-for-dollar tax credit from the state. Florida awarded $559 million in tax credits for 2016-17, and 69 percent of the programs’ beneficiaries are in religious schools. That is translating into $13.8 million in scholarships to 2,405 students in 32 Jewish schools in the state this year. The scholarships are worth up to $5,886 per student.

At Katz Hillel Day School of Boca Raton, the scholarship funds combined with a pay-down-the-mortgage campaign helped reduce tuition by $1,000 for K-8th grade in the 2017-18 school year, according to Daniel Adler, the school’s treasurer and founding member of Teach Florida.

Adler, who helped lead a successful lobbying effort that raised the income levels for scholarship eligibility, would like to see parochial school students get the same amount of funding from the state as public school students.

“A family of four making $60,000 to even $120,000 is still struggling to pay tuition, a mortgage, health care and the rest of their bills,” said Adler, who has three children in day school. “Our vision is that all Jewish families in Florida have the opportunity to send their children to Jewish schools and not be crushed by tuition bills. Educational Savings Accounts, where parents receive a significant portion of the money that the state is paying for public school children, would be a game changer for our community and all parents who want to choose the best education for their children.”

Elsewhere in the country, schools are experimenting with flexible or capped tuition models aimed at giving relief to middle-income families. For example, in 2015 four Jewish day schools in New Jersey decided to use a $10 million gift to cap tuition at 18 percent of a family’s pre-tax income. Other schools, like Oakland Hebrew Day School in California, use flexible, sliding-scale tuition models.

“There is no silver bullet,” said Daniel Perla, director of financial vitality at Prizmah: Center for Jewish Day Schools, a new umbrella organization serving nearly 400 Jewish day schools across the denominational spectrum in North America. “National funders have all come to realize that the only thing that will get us to more affordable schools is a whole series of small interventions.”

In response to financial pressures on families, day school tuition growth slowed significantly after the 2008 recession. Whereas annual tuition increases of 3-5 percent were common from the mid-1990s through the late 2000s, tuition growth since 2009 has been closer to 1-3 percent per year, according to Perla. Yet even with capped tuitions, he said, day school is still unaffordable for a growing number of middle-class families, and incomes have not kept up with inflation.

The Jewish Federation of Northern New Jersey has been working on a different approach to the tuition crisis. Several years ago, the federation helped create a cooperative that negotiates with vendors on behalf of area day schools, congregational schools and Jewish institutions. Using collective bargaining power, the Kehilla Cooperative has been able to negotiate reduced costs on everything from gas and electric bills to office supplies and credit card processing.

“On utilities alone, we have saved day schools over $600,000 since inception,” said Jason Shames, CEO of the Jewish Federation of Northern New Jersey. “And by providing the services of a purchasing manager free of charge to the agencies, we have helped them save on staffing costs. This enables schools to reduce expenses and focus on what they do best, which is educating our children.”

While philanthropy and innovative educational models have a role to play, many day school advocates say the game changer is bringing more public money into non-public schools – something President Donald Trump and his pick for education secretary, Betsy DeVos, support.

“I’m very much in favor of school choice,” Trump wrote in his book “Crippled America.”

“This issue cannot be resolved effectively unless yeshivot and day schools receive their fair share of government funding,” said Fagin, formerly an attorney and chairman of the law firm Proskauer Rose.

“Our families pay taxes. They’re getting back pennies on the dollar compared to what others are receiving in the form of public education,” he said. “From our perspective, this is an issue of civil rights. We are not going to be satisfied until there is actually a meaningful rollback on tuition.”