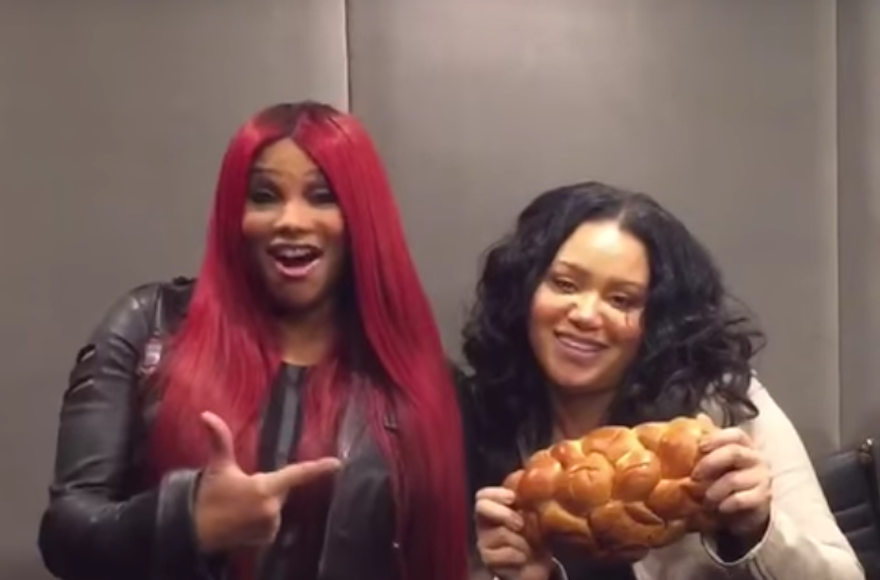 If one were to pick a hip-hop star to plug challah baking for a Jewish charity event, an obvious first choice would be Drake — the nice Canadian Jewish boy who went to day school and rapped about his bar mitzvah on “Saturday Night Live.”

But don’t underestimate how many celebrities love the taste of the Jewish bread.

In a short promotional video for the second Kids Mega Challah Bake — which looks to bring over 1,000 Jewish children from kindergarten through eighth grade together on the day of the Super Bowl to bake loaves that go to homeless shelters in New York City — the ’80s group Salt-N-Pepa give the Jewish culinary staple a lot of love.

Not surprisingly, they each have a different take: Salt (Cheryl James) wants to try using it in bread pudding and Pepa (Sandra Denton) likes to use it for French toast.

They aren’t the only celebrities involved in the challah campaign: “Beverly Hills, 90210” star Ian Ziering (who is Jewish) also made a short promotional video and former NFL player Sean James (who is not Jewish) will appear in a how-to-bake-challah video that will play at the event.

Last year, the event brought together over 1,200 people from 31 schools, congregations and institutions, and the organizers expect a larger turnout this year.

The project is dedicated in memory of Dr. Lawrence Resnick, a physician who treated the late Lubavitcher rebbe, Rabbi Menachem M. Schneerson, until Schneerson’s death in 1994. Resnick died in 2004.