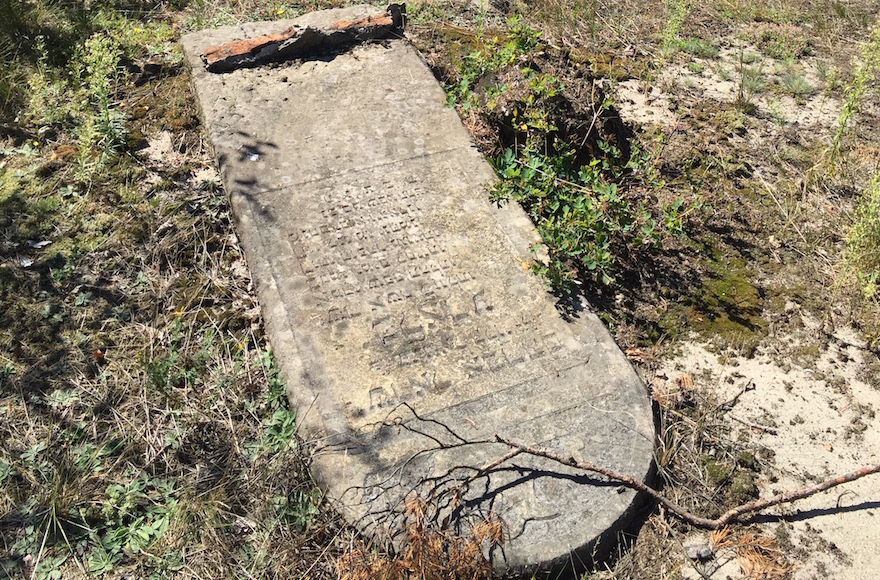 (JTA) — Growing up, I had always heard the names Otwock and Karczew. Both are neighboring towns near Warsaw.

Before the Holocaust, Otwock was home to some 14,000 Jews. Karczew had about 500 Jewish residents and became home to a Nazi forced-labor camp during World War II.

While both places may have little name recognition around the world, in my family the names loomed large. They were as common to all of us as the names of Poppy and Grandma’s murdered siblings.

My grandparents had grown up in Otwock. They fled to the Warsaw Ghetto following the summer of 1942, when they were teenagers, after the Nazis had murdered 12,000 of the 14,000 Jews living in their town.

Years later, having survived the war and immigrating to the United States, my grandparents had children. They raised their two kids as best they could, often falling back on their Holocaust stories. But because of these grim bedtime tales, my father slept with a packed suitcase beneath his bed. The Nazis, he assumed, would inevitably storm his Brooklyn apartment. My aunt developed an eating disorder. Nightmares were constant.

But Poppy and Grandma learned from their mistakes — by the time the grandchildren were around, their Holocaust stories were reduced to whispers. Discussions about Otwock, Karczew, the ghettos and the camps were off the table. Though I constantly pressed them for stories, they kept silent.

In 2004, however, I traveled to Otwock. I discovered the four synagogues had been dismantled, the town hall had no records, Grandma’s street had vanished from the map, the supposed “Jewish Center” had no Jews.

While the trip was disappointing, my visit broke Grandma’s silence. For the next six years, Grandma shared her stories. I also interviewed other survivors, pored through texts, wrote to tracing services, begged for records and watched my grandparents’ Shoah Foundation testimonies.

The research left me with questions unanswered — there were, I realized, concentration camps without records and histories that vanished without a trace.

Karczew was among those mysteries. In April 1942, 400 Jewish boys from Otwock were sent to a labor camp set up in Karczew. The “Karczew Boys,” as they were known — Poppy, my grandmother’s father and two brothers, among them — dug irrigation channels. 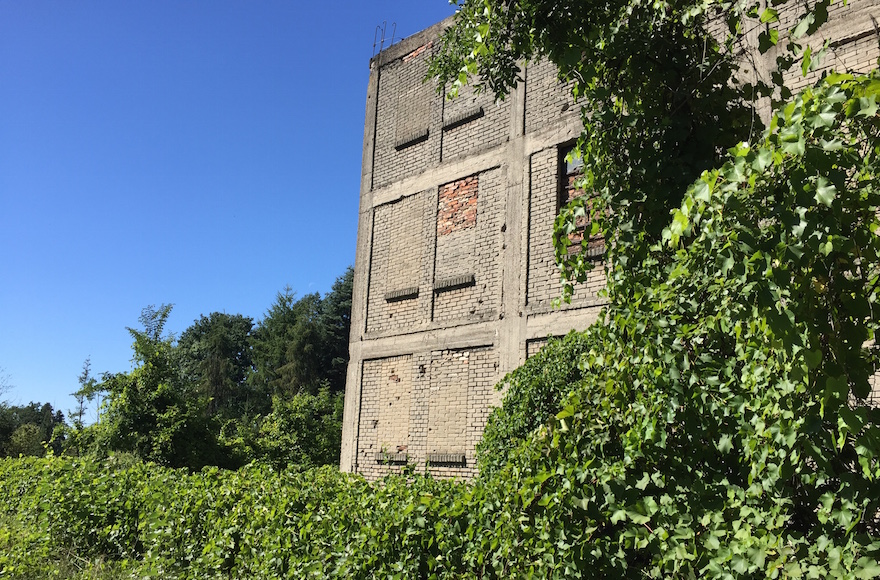 The defunct mill in Karczew, Poland, where there once was a Nazi forced-labor camp. (Noah Lederman)

But once the murders happened — 4,000 Jews were massacred in Otwock’s forest, in addition to the 8,000 who were rounded up and sent to Treblinka’s gas chambers —  they received new orders: Bury the dead.

But at least these places had museums or memorials. Even Otwock, a town that forgot its Jews, was mentioned in American Holocaust museums and in literature documenting the Nazis’ crimes.

Facts on Karczew, however, seemed nonexistent.

In 2000, the U.S. Holocaust Memorial Museum tasked researchers with creating an encyclopedia that would be the most comprehensive, single-source record to document the thousands of Nazi-established persecution sites. At the time, they estimated 5,000 sites existed, including forced labor camps, military brothels, ghettos, POW camps and concentration camps.

But by 2001, their estimate doubled. When all seven volumes are published, the “Encyclopedia of Camps and Ghettos, 1933-1945” will contain more than 42,500 sites that the Nazis had used to persecute, exploit and murder their victims.

“Quite frankly,” Geoffrey Megargee, the project leader told me, “you could put it much higher than that.”

According to a 2013 New York Times article on the project, “The numbers astound: 30,000 slave labor camps; 1,150 Jewish ghettos; 980 concentration camps; 1,000 prisoner-of-war camps; 500 brothels filled with sex slaves; and thousands of other camps used for euthanizing the elderly and infirm, performing forced abortions, ‘Germanizing’ prisoners or transporting victims to killing centers.”

Two volumes have been published, totaling nearly 4,000 pages and more than 2,200 camps and ghettos.

These discoveries shocked me. Last year, I started writing an article about the project. For the story, I would travel to Germany and visit some sites. Since only two of the seven volumes have been published, I asked to preview forthcoming entries. I asked for Karczew, which will be part of Volume 6, slated for publication in 2020.

The entry was shocking. Poppy’s name — Leon Lederman — appeared in the text. I changed my itinerary to include Poland. I had to stand in the horrifying place where my grandfather, barely out of boyhood, worked past exhaustion as a gravedigger.

I stood along the fence at the locked Karczew cemetery, staring at the assemblage of Jewish tombstones atop the hill. I was grateful it was protected but saddened I couldn’t visit the graves. (I was told the key had gone missing.) By contrast, the Jewish cemetery in Otwock, hidden deep in a red pine forest, where tipped tombstones were accompanied by smashed beer bottles and deserted campfires, had no gate.

Since my first visit 12 years before, Otwock had made some changes. A stone was placed to remember the site of one synagogue, now a shopping mall; another stone memorialized 2,000 Jews killed at one location in the forest. There was also a small museum with a modest exhibit about the local Jews. (It had actually existed in 2004, but none of the residents or employees at town hall, where the museum had originally been housed, knew about it.)

This time, I met with the curator, Sebastian Rakowski. He showed me a photograph of the Karczew Boys. Somewhere in that roll call, I knew, stood Poppy.

Rakowski showed me a book he had written about the persecution of Jews in Otwock during the war. It contained a a photograph of an old mill — when I reached this mill, he said, I’d be standing on the site of the Karczew camp.

I headed there by car immediately. The mill was defunct: windows smashed, concrete chipped, grass overgrown. Grapes grew in the shade like smoothed amethysts. Next to the mill was a scrap-metal yard with everything crushed beyond recognition. Fences and climbing plants hid homes, as if no one wanted a reminder.

Standing there, my family’s Karczew stories came flooding back to me: Grandma, who had hidden in the boys’ camp after her mother was murdered, once told me about the time the Nazis came searching the barracks. A small boy hid in the bunks. Grandma begged him to follow her, but he wouldn’t.

“They killed him,” she said.

I thought of Poppy’s escape from the Karczew camp during the liquidation of Otwock. He was attempting to save his family but ended up on a train to Treblinka. Using a wire he hid around his waist, however, he sawed through the bars of the cattle car, survived the fall and the Nazi gunners, and watched his friends and family journey to their deaths. He ran back to Karczew and was put to work digging graves. Until the grim task was complete, the camp was one of the last places in Otwock or Karczew where a Jew could survive.

I looked around Karczew. The barracks and irrigation channels were gone, but this time I knew the record — however small — remained. I pulled up the encyclopedia entry on my phone.

“The 400 Jewish forced laborers,” it read, “were put to work digging drainage channels along the Jagodzianka River.”

I felt chills. Poppy — an unnamed fighter in the Warsaw Ghetto Uprising, a Jewish teen who stuck a pitchfork through a Nazi’s neck — was no longer overlooked.

“According to Leon Lederman,” the text said, “those working in the camp were watched mainly by around 30 members of the Jewish police from Otwock.”

I tried to picture the Karczew Boys.

“Leon Lederman also recalls that when his own family was deported to Treblinka from the Otwock ghetto, a group of Jews from the Karczew camp was taken there to dig a mass grave for the Jews killed locally during the Aktion.”

I tried to imagine the horrors of that task.

“Leon Lederman also noted that [in the fall of 1942] around 300 of the remaining inmates of the Karczew camp ‘were sent to the Warsaw ghetto,’ although he says he went into hiding first for a while and then went to the ghetto.”

To read these words reminded me that Poppy mattered, and that Karczew mattered. Every single one of these encyclopedia entries — chronicling the tens of thousands of places like Karczew — all matter. They will paint a picture of what was lost — and encourage remembering by all of us.

(Noah Lederman is the author of the memoir “A World Erased: A Grandson’s Search for His Family’s Holocaust Secrets,” published Feb. 7 by Rowman & Littlefield. His articles have been featured in the Economist, the Boston Globe, the Miami Herald, the Washington Post, Slate, Salon, the New Republic, Tablet Magazine, the Jerusalem Post Magazine, Tikkun and elsewhere. He writes the travel blog Somewhere Or Bust and tweets @NoahLederman.)