With history in mind, Jews across US join airport protests of Trump refugee ban 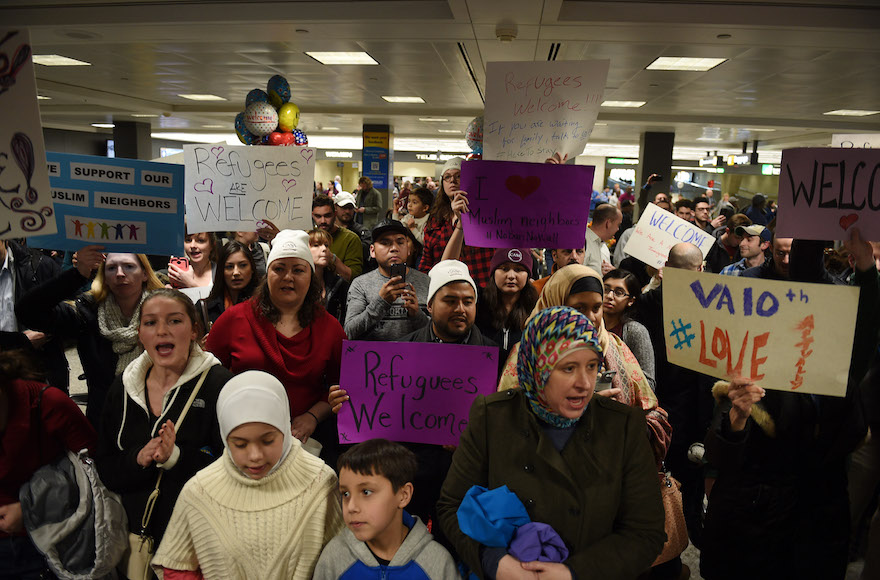 DULLES, Va. (JTA) – The Israeli-born high-tech millionaire gathered his family after turning on CNN. The rabbi who leads an interfaith group got a text from a Muslim friend. The corporate lawyer was tracking a pro-bono email list she’s on.

Within a few hours, all of them had descended on Dulles Airport, about 25 miles outside of the nation’s capital.

They were among the thousands of Americans who met at major international airports across the country Saturday to protest President Donald Trump’s executive order barring entry to citizens of seven predominantly Muslim countries. In the plight of those refused entry, many Jews saw something akin to what their forebears endured as they attempted to flee Nazi-occupied Europe.

Some noted cruel irony in the president’s order coming down on Friday, which was International Holocaust Remembrance Day.

Trump’s directive blocks for 120 days all refugees from entering the country, with an indefinite ban on those from Syria, and prevents for 90 days entry into the United States by citizens of Iran, Iraq, Libya, Somalia, Sudan, Syria and Yemen.

Chava Brandress, a corporate lawyer, said she belongs to a pro-bono legal listserv, and her email “began exploding” Saturday afternoon with tales of foreign nationals being detained after landing at Dulles.

“I felt, ‘I can’t understand how this is happening again,’” said Brandress, 36, recalling how Jews, fleeing Nazi persecution, were turned away from U.S. shores. 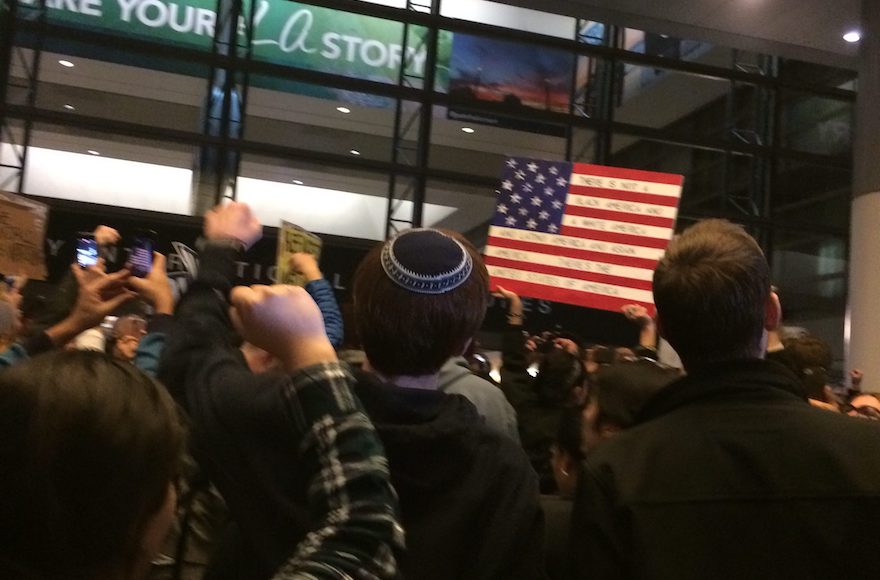 At Dulles and the many other major airports where crowds gathered, protesters sang and chanted. They erupted in cheers when a New York judge placed a temporary stay on Trump’s refugee ban — a ruling that prevented scores of refugees and other foreign nationals held by U.S. passport control in the wake of the executive order from being deported.

Hundreds also came together outside the Brooklyn Federal Court House, where Judge Ann Donnelly granted the emergency stay, with some chanting “Never again” and holding signs that read “Never Again! Never is Now!” Lee Gelernt, an American Civil Liberties Union lawyer who argued the case, said afterward that he had never seen such a public show of support in his two decades in the field.

At New York’s John F. Kennedy International Airport, protesters packed sidewalks and a parking structure outside Terminal 4. They carried placards slamming the executive order and chanting slogans such as “No hate, no fear, refugees are welcome here.”

Hundreds gathered at O’Hare International Airport in Chicago and demanded the release of 17 travelers who had been detained as a result of the executive order. They chanted “Let them in!” and held signs that read, among other things, “I am an immigrant” and “No Muslim ban.”

The co-founder of Google, Sergey Brin, was among those who joined the protest at San Francisco International Airport. In 1979, Brin’s family fled religious persecution in the Soviet Union and resettled in the United States with the help of HIAS, then known as the Hebrew Immigrant Aid Society. 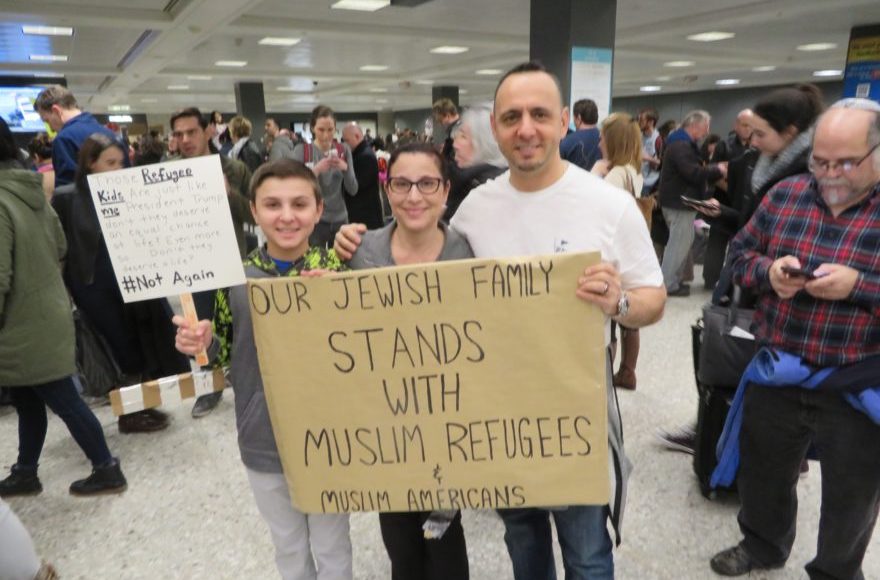 At the international terminal of Los Angeles International Airport, Rabbi Suzanne Singer of Temple Beth El in Riverside, California, voiced opposition to the executive order with hundreds of others. She traveled some 70 miles to be there.

“It’s an absolute outrage that we are keeping people from coming here for refuge,” Singer said. “My mother was a survivor from Auschwitz. As Jews, we know what it’s like to be persecuted.”

She added, “It’s certainly not Jewish values; it’s not American values” to ban people based upon religion.

Also at the Los Angeles airport protest was Gabriel Lobet, 18, who just hours earlier had been teaching a Hebrew school class about a Torah portion in which Abraham welcomes a stranger in his midst.

“A core value of my Hebrew school years, and being a bar mitzvah, is that we were strangers, immigrants in a new land,” Lobet said. 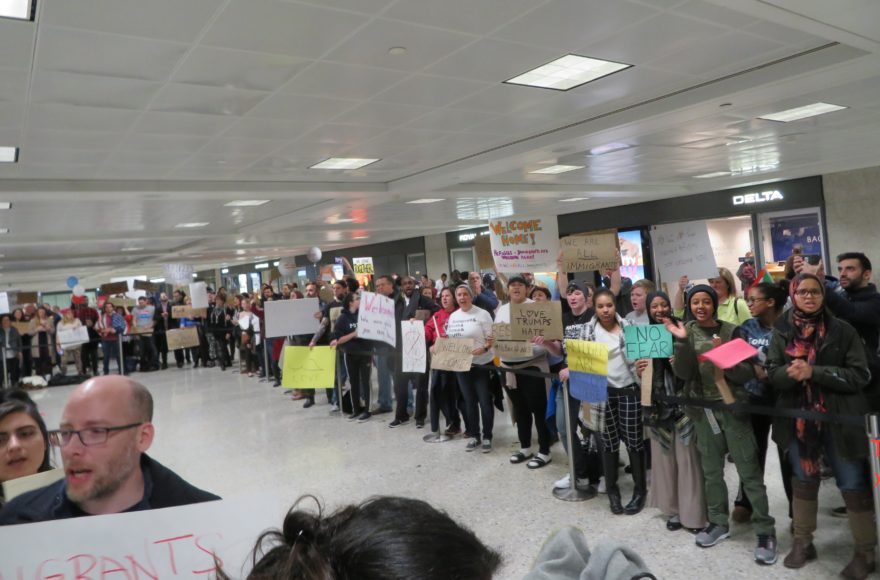 Nearby, Mana Rostami-Mouripour, a Muslim who emigrated from Iran when she was 15, was protesting with a Jewish colleague from the international NGO Human Rights Watch. Rostami-Mouripour said she came fearing “that what happened in Nazi Germany and Rwanda and so many places will happen here.”

“I know people that may be separated,” she added.

Still, Rastami-Maripour said that “seeing the solidarity of so many of my Jewish brothers and sisters is comforting and gives us hope.”

At Dulles, Rabbi Jack Moline, the president of Interfaith Alliance, checked his phone following Shabbat to find a text message from a Muslim colleague. “Nice crowd,” she texted. “Come on down.” And so he did.

One woman at Dulles held up a large cardboard sign that said in English and Arabic, “I am a Jew. I am happy you’re in America.” A man in a kippah offered Arabic translations. An airport luggage cart was converted — thanks to Scotch tape and a sheet of paper emblazoned with “Free Legal Assistance” in pink marker — into an ad hoc law office abutting the roped-off transit area for arriving passengers.

Zlotnitsky, 43, his wife, Miri, and their son, Jacob, 14, had seen the protests at Dulles on CNN and joined. He said he came to the United States from Israel when he was 12. He overstayed his visa and now ran a data analysis firm.

“If we give up our core ideals,” he said, “that’s how the terrorists win.”