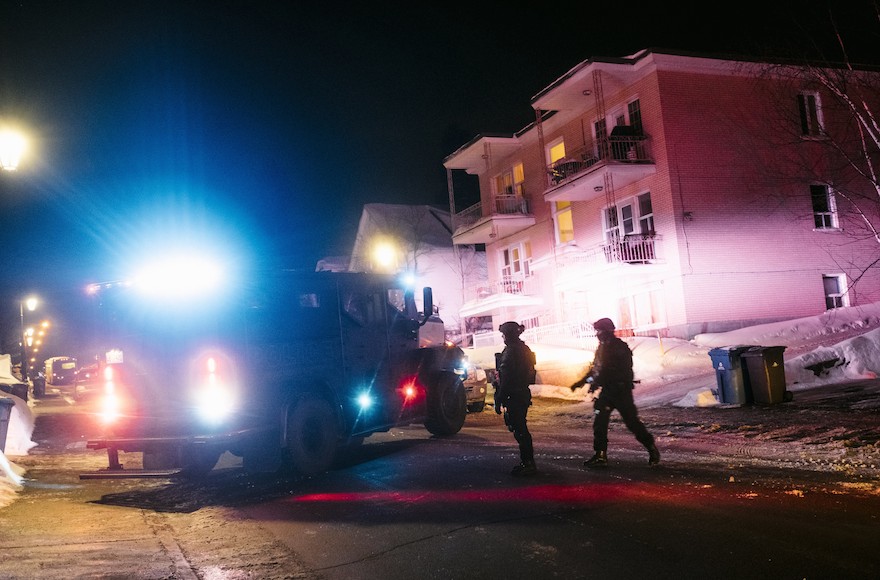 MONTREAL (JTA) — The Centre for Israel and Jewish Affairs in Quebec and the World Jewish Congress were among the Jewish and non-Jewish groups who condemned the attack on a Quebec mosque during a prayer service that left six dead and eight wounded.

Canadian Prime Minister Justin Trudeau called the Sunday night attack on the Quebec City Islamic Cultural Centre, in which gunmen fired on the some 40 people inside, a “terrorist attack on Muslims,” Reuters reported.

Two suspects – reportedly students at Laval University in the city – were arrested following the attack in the Quebec City suburb of Ste-Foy, although the specific reasons behind the shootings remained unclear. One of the students,  Alexandre Bissonnette, later was named the sole suspect in the attack and the second, Mohamed Khadir, was named a witness, Reuters reported.

The building, called the Grand Mosque, has experienced several isolated incidents of vandalism since its founding five years ago, including a pig’s head left on its property last June during the Muslim holy month of Ramadan.

One of the victims on Sunday reportedly was a convenience store owner and father of four who has stopped by the mosque for evening prayers.

“We condemn this terrorist attack on Muslims in a center of worship and refuge,” Trudeau said in a statement. “Muslim-Canadians are an important part of our national fabric, and these senseless acts have no place in our communities, cities and country.”

Rabbi Reuben Poupko, co-chair of the Centre for Israel and Jewish Affairs, said the Jewish community “is horrified by the murderous shooting.”

“Nothing justifies the murder of innocent civilians assembled in a place of worship,” he said.

WJC President Ronald Lauder in a statement issued early Monday morning called it a “horrific attack” and called for “those who perpetrated this abhorrent act of mass murder” to be “brought to justice.”

Echoing previous statements, Lauder said: “We must not be intimidated by terrorism, but cherish our freedom, including the freedom to worship.  We must defend each other, and we must look after one another: one religious community after the other, one country after the other. The scourge of terrorism won’t be defeated unless we are united in our resolve to defeat it.”

The American Jewish Committee in a statement said it was “appalled” by the fatal attack.

“This was an attack on Canada, not only on one mosque,” said Robert Silverman, the group’s director of Muslim-Jewish relations. “Indeed, it was an attack on any democratic society founded on religious pluralism that today faces threats against its Muslim populations. Our thoughts are with the families of the worshippers senselessly murdered, and with the injured, who are in need of our prayers.”

President Reuven Rivlin of Israel joined other world leaders in condemning the attack, first tweeting: “Thoughts & prayers with the Canadian people, @GGDavidJohnston, PM @JustinTrudeau, after the horrific attack on a house of prayer in #Quebec.”

Thoughts & prayers with the Canadian people, @GGDavidJohnston, PM @JustinTrudeau, after the horrific attack on a house of prayer in #Quebec

British Board of Deputies President Jonathan Arkush, who is traveling the country to promote Jewish-Muslim relations, also condemned the attack.

“There can be no justification whatsoever for the wanton slaughter of innocents,” he said. “We pray for the victims and their families, and call on all communities to redouble efforts to defeat the evils of bigotry and terrorism for good.”