Socialist primary winner in France had backing of prominent anti-Semites 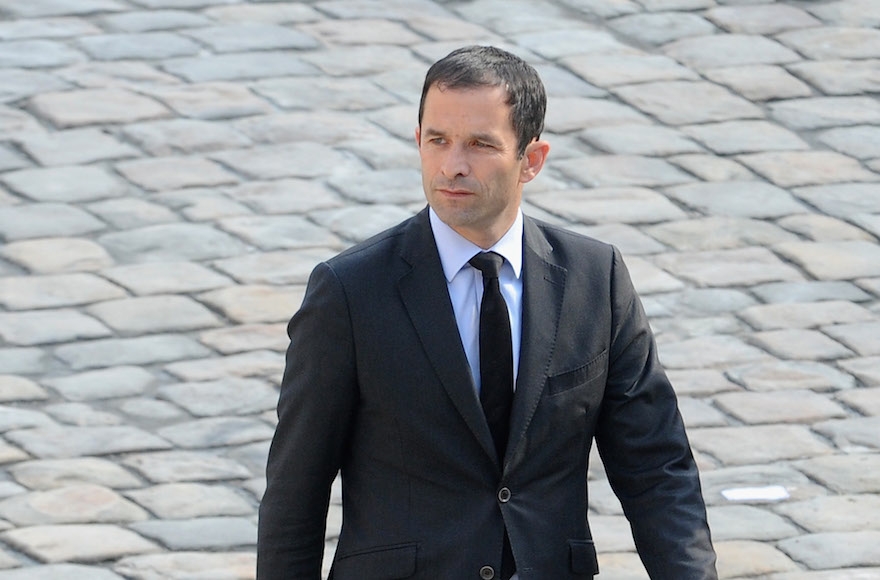 (JTA) — A left-wing politician in France who was endorsed by the founders of the country’s Anti-Zionist Party handily defeated Prime Minister Manuel Valls in the Socialist presidential primaries.

Benoit Hamon, who supports dramatically expanding welfare payments and has called for his party to support Palestinian causes to increase its appeal to Muslim voters, beat his hard-line challenger Sunday with 58 percent of the vote in the second and final round of the balloting.

Last week, the comedian Dieudonne M’bala M’bala and the far-right author Alain Soral — who along with founding the  Anti-Zionist Party both have multiple convictions for Holocaust denial and inciting racial hatred against Jews – endorsed Hamon publicly. Hamon disavowed Soral and Dieudonne.

Soral wrote on his website that voting for Hamon was necessary to “knock Valls out of the race” because he is “a candidate who swore allegiance to the CRIF and to Israel be it through policy, media exposure, judicial means or by deploying the police.” CRIF is the umbrella group of French Jewish communities.

Soral and Dieudonne cited Valls’ commitment to defending Jews against anti-Semitic violence. Valls is married to Anne Gravoin, a Jewish musician. In 2011 he said his marriage connected him “in an eternal way” to Israel and the Jewish people. He is also the only French prime minister who has said publicly that anti-Zionism is a form of anti-Semitism.

Hamon will contend in the presidential elections in May against the hard-line candidate Francois Fillon of The Republicans party of former President Nicolas Sarkozy, the far-right candidate Marine Le Pen and Emmanuel Macron, a centrist independent.

The National Bureau for Vigilance Against Anti-Semitism called on Hamon to react to the endorsement, prompting Hamon to publish a statement about it two days later. Hamon said he “opposes the deceit of the far-right and the conspiratorial and anti-Semitic streams” the two represent.

Hamon supports giving every French adult, including those who are able to work but do not do so, a basic monthly salary. He and Valls clashed repeatedly on the issue and on bans on wearing Muslim garb in public spaces, which Valls supports. Valls has accused Hamon of “having an accommodating approach” to radical Islam. They also have clashed about Israel.

Both Hamon and Valls have expressed their opposition to attempts to boycott the Jewish state, which are illegal in France.

Hamon in a televised interview last month called the establishment of a Palestinian state the “best way of ensuring Israel is not attacked by its neighbors.” But in a 2014 interview, he said that supporting the establishment of such a state was the Socialist Party’s “best way to recuperate our electorate in the suburbs and the neighborhoods” – code for Muslim voters — “who did not support the pro-Israeli position taken by President Francois Hollande.”

Hamon had criticized Valls, too, for “giving in to Israel.”