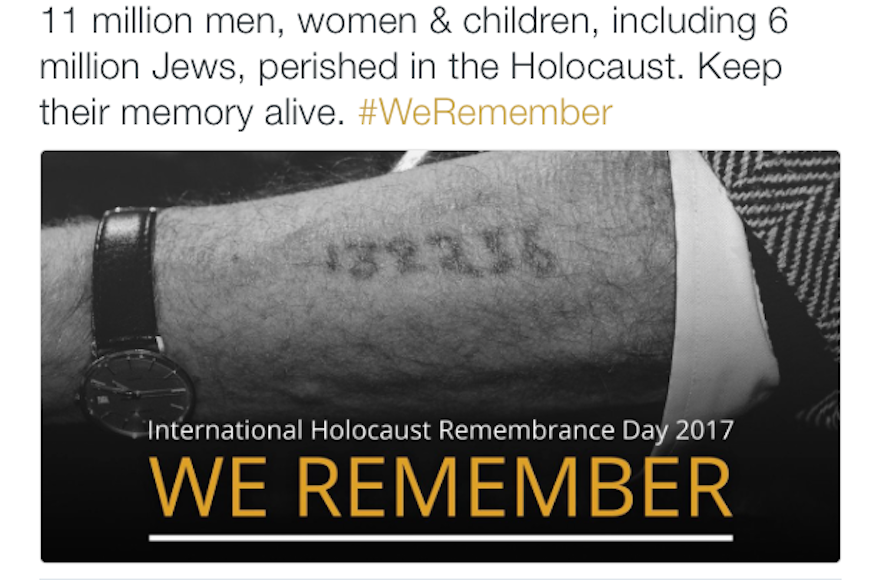 A social media post by the IDF Spokesperson's Unit, marking International Holocaust Remembrance Day, includes a total of Jews and non-Jews killed in the Holocaust that historians say is greatly exaggerated. (Twitter)
Advertisement

It’s a statement that shows up regularly in declarations about the Nazi era. It was implied in a Facebook post by the Israel Defense Forces’ spokesperson’s unit last week marking International Holocaust Remembrance Day. And it was asserted in an article shared by the Trump White House in defense of its controversial Holocaust statement the same day omitting references to the 6 million Jewish victims.

It is, however, a number without any scholarly basis.

Indeed, say those close to the late Nazi hunter Simon Wiesenthal, its progenitor, it is a number that was intended to increase sympathy for Jewish suffering but which now is more often used to obscure it.

The White House statement sent waves of dismay through the Jewish community, including among groups that have been supportive of President Donald Trump.

By mentioning the “victims, survivors, [and] heroes of the Holocaust” without mentioning the Jews, said a host of Jewish organizations, the Jan. 27 statement risked playing into the hands of the European right, which includes factions that seek to diminish the centrality of the Jewish genocide to the carnage of World War II.

In defending the omission of Jews from the statement, a White House spokeswoman, Hope Hicks, sent CNN a link to a 2015 Huffington Post-UK piece titled “The Holocaust’s Forgotten Victims: The 5 Million Non-Jewish People Killed By The Nazis.”

Sean Spicer, the White House spokesman, on Monday appeared to cite the same source, saying that the Nazis’ victims included Roma, gays, the disabled and priests. He called complaints about the statement “pathetic,” although some of those objections came from two groups that otherwise have been supportive of Trump, the Republican Jewish Coalition and the Zionist Organization of America.

In the wake of the controversy, the world’s two leading Holocaust museums, in Washington and in Jerusalem, issued statements emphasizing the centrality of the annihilation of the Jews to the understanding of the Holocaust; neither mentioned Trump.

The “5 million” has driven Holocaust historians to distraction ever since Wiesenthal started to peddle it in the 1970s. Wiesenthal told the Washington Post in 1979, “I have sought with Jewish leaders not to talk about 6 million Jewish dead, but rather about 11 million civilians dead, including 6 million Jews.” 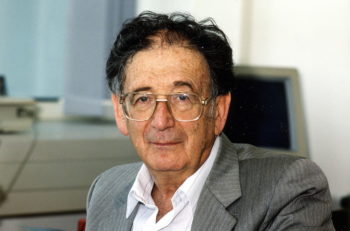 Yehuda Bauer, an Israeli Holocaust scholar who chairs the International Holocaust Remembrance Alliance, said he warned his friend Wiesenthal, who died in 2005, about spreading the false notion that the Holocaust claimed 11 million victims – 6 million Jews and 5 million non-Jews.

“I said to him, ‘Simon, you are telling a lie,’” Bauer recalled in an interview Tuesday. “He said, ‘Sometimes you need to do that to get the results for things you think are essential.’”

Bauer and other historians who knew Wiesenthal said the Nazi hunter told them that he chose the 5 million number carefully: He wanted a number large enough to attract the attention of non-Jews who might not otherwise care about Jewish suffering, but not larger than the actual number of Jews who were murdered in the Holocaust, 6 million.

It caught on: President Jimmy Carter, issuing the executive order that would establish the U.S. Holocaust Memorial Museum, referred to the “11 million victims of the Holocaust.”

Deborah Lipstadt, a professor of Holocaust studies at Emory University in Atlanta, wrote in 2011 how the number continues to dog her efforts to teach about the Holocaust.

“I have been to many Yom Hashoah observances — including those sponsored by synagogues and Jewish communities — where eleven candles were lit,” she wrote in an article in the Jewish Review of Books in which she lacerated Wiesenthal’s ethical standards. “When I tell the organizers that they are engaged in historical revisionism, their reactions range from skepticism to outrage. Strangers have taken me to task in angry letters for focusing ‘only’ on Jewish deaths and ignoring the five million others. When I explain that this number is simply inaccurate, in fact made up, they become even more convinced of my ethnocentrism and inability to feel the pain of anyone but my own people.”

The problem, according to Bauer, who has debunked the number repeatedly in his writings over the decades, is not that non-Jews were not victims; they were. It is that Wiesenthal’s arbitrarily chosen tally of non-Jewish victims diminishes the centrality to the Nazi ideology of systematically wiping any trace of the Jewish people from the planet.

In fact, he said, the term “genocide” could accurately be applied to the 2 million to 3 million Poles murdered and millions more enslaved by the Nazis. But the mass murder of the Poles, Roma and others should not come under the rubric “Holocaust,” a term that Holocaust historians generally dislike because of its religious connotations but nonetheless have accepted as describing only the annihilation that the Nazis hoped to visit on the Jews.

“All Jews of the world had to be annihilated,” Bauer said. “That was the intent. There was never an idea in Nazi minds to murder all the Russians.”

The number 5 million also adheres to no known understanding of the number of non-Jews killed by the Nazis: While as many as 35 million people were killed overall because of Nazi aggression, the number of  non-Jews who died in the concentration camps is no more than half a million, Bauer said.

Using the 11 million figure often leads to muddled history. The Huffington Post-UK article Hicks linked to, for instance, lists as a separate class “twins,” as if Josef Mengele, the murderous doctor at Auschwitz, sought out twins of any heritage for his experiments. In fact, they were chosen only from among the Jews and Roma arriving at the camp.

Mark Weitzman, the director of government affairs for the Simon Wiesenthal Center, said that Wiesenthal, in advancing the number, “never intended to minimize the Jewish specificity of the Shoah,” the Hebrew word for Holocaust.

“He was trying to draw attention to the fact that there were other victims of Nazi genocide,” Weitzman said.

Nonetheless, Weitzman acknowledged that Wiesenthal’s formulation, decades later, was inadvertently contributing to the efforts among right-wing nationalists in Europe to minimize Jewish suffering in the Holocaust.

“This is used as a political tool to minimize the Jewish aspect, to write it out of history, or to maximize other victims’ suffering to make them the prime victims and claim a place of honor in the role of victims,” he said. “Unfortunately to some people, it becomes a competitive game, especially for political purposes.”

The White House has endeavored to show that the statement has Jewish approval. Spicer said a Jewish staffer descended from Holocaust survivors helped draft it, and Politico, citing a source, reported late Monday that it was Boris Epshteyn, a Russian-born Jew who is one of Trump’s advisers.

The IDF spokesperson’s Facebook post, which also neglected to mention the Jewish victims, said that “11 million men, women, and children perished in the Holocaust. Share their stories and speak their names to keep their memory alive.” The post was later changed to include the 6 million Jewish victims, but the reference to 11 million remains.

Rabbi Marvin Hier, who founded the Wiesenthal Center and delivered the benediction at Trump’s inauguration, told CNN on Tuesday that Trump’s statement was a “mistake,” but one he did not believe was intended to diminish Jewish suffering.

“I do not accuse President Trump of wanting to dishonor the memory of the victims of the Holocaust who were Jewish, but it was a mistake,” he said.

Lipstadt, writing this week in The Atlantic, is not so sure, given the affinity that some in the Trump administration – particularly Trump’s chief strategist, Stephen Bannon, have to the “alt-right,” a movement that has embraced the resurgent nationalism now prevalent in parts of Europe.

“It may have all started as a mistake by a new administration that is loath to admit it’s wrong,” she wrote. “Conversely, it may be a conscious attempt by people with anti-Semitic sympathies to rewrite history. Either way it is deeply disturbing.”

“The Trump statement makes a salad of the Holocaust,” he said. “This is soft denial.”