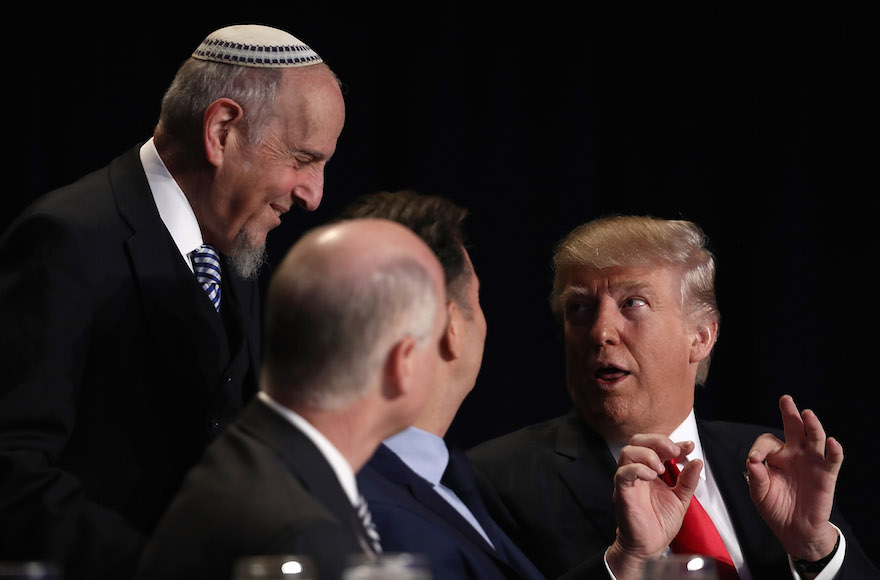 WASHINGTON (JTA) — Painting a dark picture of a world at war with ISIS, President Donald Trump called on other nations to join the United States in confronting the threat “viciously” and said it underpinned his recent controversial bans on entry to the U.S.

“We have seen unimaginable violence taken out in the name of religion, acts of wanton horror against religious minorities, horrors of a scale that defy description,” Trump said Thursday at the National Prayer Breakfast, an annual event where political leaders usually deliver speeches about their faith-based struggles and redemptions.

In the same speech, Trump reiterated a campaign promise to gut the tax code of provisions that prevent religious groups from campaigning for or against a political candidate.

“I will get rid of and totally destroy the Johnson Amendment,” he said of the law, which takes its name from President Lyndon Johnson, who saw through its passage as a Texas senator, “and allow our representatives of faith to speak freely and without fear of retribution.”

Trump named only one antagonist, the Islamic State, or ISIS, in a broad indictment of terrorist threats, including against Jews, and called for a united front to crush the “enemies.”

“We have seen peace-loving Muslims brutalized, victimized, murdered and oppressed by ISIS killers,” he said. “We have seen threats of extermination against the Jewish people.”

Trump was graphic and detailed in his depiction of the perceived threat, deviating from his prepared marks to describe the way ISIS decapitates captives. He described it three times, miming it with his right hand slicing across the air.

Trump said these concerns were behind his executive order last Friday to ban entry for 90 days to travelers from seven predominantly Muslim nations. The order has created chaotic scenes at airports across the world as officials attempt to assess who is and is not affected by the ban. It also banned entry to refugees for 120 days and barred Syrian refugees indefinitely.

“There are those who would seek to enter our country for the purpose of spreading violence or oppressing other people based upon their faith and lifestyle,” he said. “We will not allow a beachhead of intolerance to spread in our nation.”

Most major Jewish groups criticized the order, saying it appeared to target individuals based on their religion.

Most terrorist attacks in recent years have been homegrown and not committed by recent immigrants. Those committed by visitors – most prominent among them the 9/11 attacks in 2001 – were carried out for the most part by people whose origin was in countries not on the ban list.

Trump suggested that America would seek immigrants who had a cultural affinity with the United States.

“You look all over the world and you see what’s happening,” he said. “We will develop a system to help ensure that those who enter our country fully embrace our values of religious and personal liberty and they reject any form of oppression and discrimination.

Trump was jovial during much of the speech, mocking Arnold Schwarzenegger, his successor as the host of the NBC reality TV show “The Apprentice.”

He only briefly deferred to the tradition of speakers at the prayer breakfast, a 64-year old institution run by a secretive Christian group, The Fellowship Foundation, of describing their religious awakening. He said he was brought up in a “churched” family.

But he threw red meat to the audience in repeating his campaign pledge to remove from the tax code provisions denying tax-exempt status to religious groups that endorse or oppose political candidates..

There is already wide leeway under the existing tax code for religious leaders to speak to political issues; removing the provision would allow them to endorse candidates. An array of Jewish groups, among them those representing the Reform movement, endorses the church-state separations embedded in the law.

Trump’s pledge came as Republicans in the U.S. House of Representatives and the Senate introduced legislation this week to loosen the tax code to allow tax-exempt groups to more fully involve themselves in political campaigns.