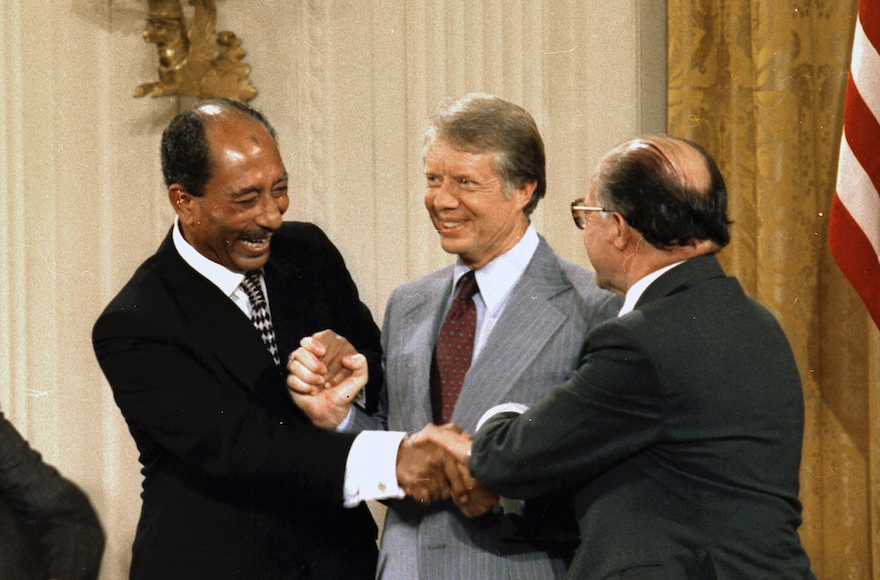 WASHINGTON (JTA) — Bipartisan legislation in the House and Senate would honor Anwar Sadat posthumously with the Congressional Gold Medal for leading Egypt to peace with Israel.

The medal, the highest civilian honor bestowed by Congress, would be conferred in 2018, the centenary of the late Egyptian president’s birth.

“President Sadat was the first Arab leader to recognize Israel,” said Sen. Ben Cardin, D-Md., who joined Sen. Orrin Hatch, R-Utah, in introducing the bill in the Senate. “He displayed courage and vision when he negotiated the peace treaty, fundamentally changing the course of history in the Middle East for the better.”

Backing the bill in the House of Representatives are Reps. Grace Meng, D-N.Y., and Chris Stewart, R-Utah.

The bid to confer the medal is being promoted by The Friedlander Group, a New York-based publicity and lobbying firm with a focus on Jewish issues.

The medal, launched in 1776 and first awarded to George Washington, also has been conferred among others on Elie Wiesel, the Holocaust memoirist and Nobel Peace Prize laureate; Shimon Peres, the former Israeli president and prime minister; Menachem Mendel Schneerson, the Lubavitcher rebbe, and Raoul Wallenberg, the Swedish diplomat who was abducted by the Soviets and who died imprisoned by them after saving tens of thousands of Hungarian Jews during the Holocaust.