Bannon and the Jews: A conditional kind of love 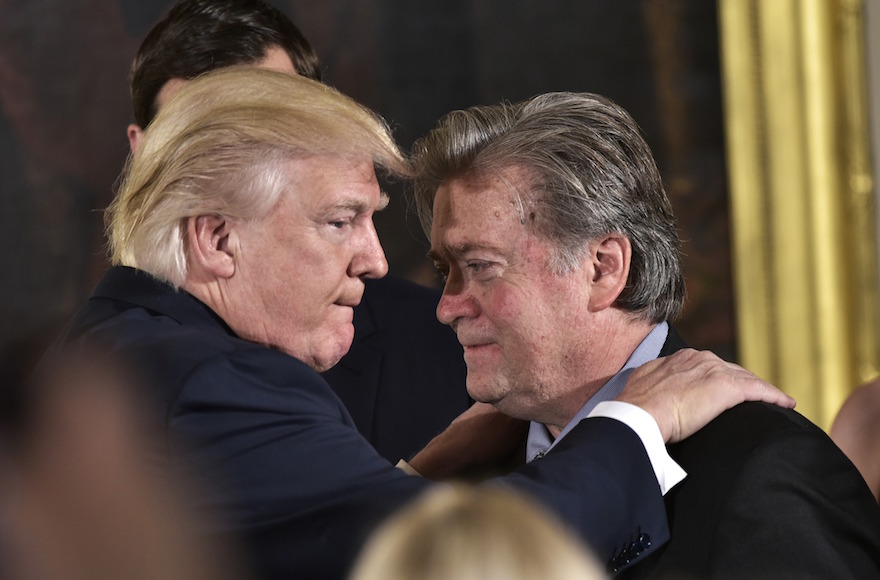 President Trump and Stephen Bannon at the swearing-in of senior staff in the East Room of the White House, Jan. 22, 2017. in Washington, DC. (Mandel Ngan/AFP/Getty Images)
Advertisement

(JTA) — Reports that White House Svengali Steve Bannon once referred to the American Jewish community as enablers of Islamist jihad revived accusations that the former Breitbart News publisher is an anti-Semite.

On its face the accusation, like the oft-repeated charge that Breitbart itself is an anti-Semitic news site, is weak. Bannon’s point about jihad’s “enablers” is not that Jews share an ideology with the jihadists but the opposite: As a largely liberal community, American Jews support civil liberties and immigrants’ rights — creating a climate, so goes the argument, that even with the best of intentions supposedly allows terrorists to thrive.

Breitbart is a reliably pro-Israel site, well to the right of most American Jewish publications. In the rare instance where one of its correspondents has slipped into explicit anti-Jewish territory — as when an article declared about a Washington Post reporter that “hell hath no fury like a Polish, Jewish, American elitist scorned” — “Jewish” is synonymous with “liberal.” Spend some time on Breitbart and what emerges is contempt for the Secular American Jewish Liberal and admiration for the Religious Nationalist Jewish Conservative.

I don’t know if that makes the average Jew feel any better — that if you’re the right (and I do mean right) kind of Jew, then you’re OK. But it’s essential to acknowledge the distinction if we are to understand the ways public discourse is changing in the Trump area. Anti-Semitism is alive and well on the fringes of the movements that helped elect Trump, but it remains taboo the closer you get to the inner circle, which includes Trump’s Orthodox daughter and son-in-law. Where Jews might have cause to worry, however, is in the tendency of Trump’s insiders to cleave the Jews into two unreconcilable communities — blues and reds, Republicans and Democrats, doves and hawks, Hillary supporters and Trump voters.

The White House tapes revealed Richard Nixon as an unrepentant anti-Semite who whispered with aide Bob Haldeman about the Jewish “bastards” who can’t be trusted and “turn on you.” But his apologists have long argued that his animus wasn’t aroused by Jews per se but by their politics. They point to the Jews in his inner circle — Henry Kissinger, William Safire and Leonard Garment, to name a few (although there’s a long conversation in which Nixon and Haldeman discuss Kissinger’s Jewish “insecurity”). The tapes also suggest that Nixon thought better of Israeli Jews than American Jews.

In one sense, Nixon was right: Then, as now, Jews tended to vote Democratic and were overrepresented among the politicians, activists and academics who opposed him. But there is already a name for such people: liberals. “Jew” doesn’t add much to the formula except to tar a people — a historically persecuted people to boot — with the brush of bigotry.

(And the argument that it was liberals not Jews who raised Nixon’s hackles is undermined by Nixonisms like this one: “The Jews are just a very aggressive and abrasive and obnoxious personality.”)

Breitbart, a sort of farm team for the White House staff, never dips into that kind of invective (even if its readers often do). But they also imagine two very different kinds of Jews. Israeli Jews and their supporters on the right are the good kind, strong and stalwart when they aren’t the innocent and nearly helpless victims of a fierce Arab enemy and their Western enablers. They have a lot to teach the West about security and standing up to Islamist terror.

American Jews, especially the Democratic-voting majority and the organizations that represent them, tend to show up in Breitbart only when they occasionally agree with a conservative position or are criticized by right-leaning Jews for disagreeing with a right-wing position. That was the point of the article by right-wing activist David Horowitz, titled “Bill Kristol: Republican Spoiler, Renegade Jew,” that is usually labeled Exhibit A in describing Breitbart as anti-Semitic. As Horowitz himself explained in a follow-up, he called Kristol a “renegade Jew” because he felt the conservative pundit, in opposing Trump, had “betrayed the Jews.” Horowitz’s overheated article was a defense of right-wing Jewish interests and an attack on a Jew who would undermine them.

Trump bought into the good Jews-bad Jews view of the world in picking David Friedman as his ambassador to Israel. Most American Jews weren’t surprised that Trump would pick an envoy (and personal lawyer) who shared his and Bannon’s (and, in most ways, Benjamin Netanyahu’s) right-leaning, nationalist version of pro-Israel politics. But after getting over Friedman’s dearth of diplomatic credentials, they were shocked by his stated disdain for Jews on the other side of the argument. Writing for the pro-settler Arutz Sheva news site, Friedman labeled the left-wing pro-Israel group J Street as “not Jewish” and “worse than” the Jewish “kapos” who collaborated with the Nazis.

As my colleague Ron Kampeas pointed out, one traditional job of the U.S. ambassador to Israel is to serve as an envoy between and among American Jews — if not to agree with them, at least to assure them that they will be heard. Dan Shapiro, Obama’s ambassador to Israel from 2011 to 2017, was highly regarded on both sides for performing this function: Representing an administration that was often unpopular with much of the activist class, Shapiro respected, and earned the respect, of the other side.

Jews have done a good job all by themselves in dividing up their community into warring camps — and, perhaps worse, camps that barely talk with each other. The right-left divide, the schism between Orthodox and non-Orthodox — Jews didn’t need any help in creating these categories. But they also understood that Jewish influence would be diminished and Jewish security compromised if those on the outside were able to splinter an already splintered and tiny community into smaller and smaller pieces. That was the mantra of pro-Israel advocacy going back to the era of Max Fisher, a Jewish Republican who enjoyed good relations with Nixon.

Trump isn’t one to reach out to those who disagree with him, to say the least. Divide and conquer was pretty much his campaign strategy. And so far his efforts at Jewish inclusion — like the polarizing International Holocaust Remembrance Day statement — have been dead on arrival.

The evidence is weak that Breitbart or Bannon are anti-Semitic. And Breitbart’s eager pro-Israel stance, like Trump’s, is unmistakable.

But what troubles so many Jews, including some Jewish Republicans, is the deeply conditional nature of a support that says “If you’re with me, I’m with you.” It’s the flip side of Nixonian mania. It’s also the ideological version of two of the weakest defenses in the accused bigot’s arsenal: “Some of my best friends are Jewish” and “I have Jewish grandchildren.”