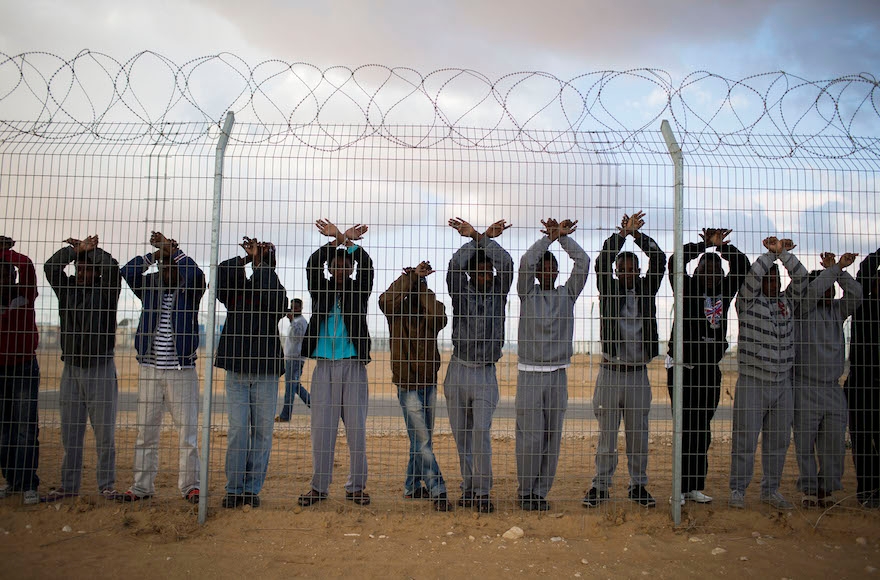 TEL AVIV (JTA) – Defending his executive order directing the construction of a wall along the U.S. border with Mexico, President Donald Trump pointed to Israel as a model, saying “a wall protects.”

With another swipe of his pen two days later, on Jan. 27, Trump enacted a targeted travel ban. As it turns out, that executive order, which has since been suspended by a federal judge, also has at least superficial similarities to Israel’s immigration regime.

“Officially, we are like Trump,” said Amnon Rubenstein, a law professor at the Interdisciplinary Center Herzliya and former Israeli education minister. “We don’t accept refugees or immigrants” who aren’t Jewish under Israel’s Law of Return. “But the reality is a little different.”

Israel for years has maintained Trumpian semi-bans on entry by citizens from several Arab countries and asylum seekers. The difference is that the law is often not enforced.

The Trump travel ban barred entry to the United States by immigrants from seven Muslim-majority countries — Iran, Iraq, Libya, Somalia, Sudan, Syria and Yemen — for 90 days. It also blocked all refugees for 120 days, and refugees fleeing the civil war in Syria indefinitely.

Since 2007, Israel has legally refused entry to most citizens from three of the countries on Trump’s list — Iran, Iraq and Syria — as well as from Lebanon. These “enemy states” were added to a 2003 emergency law, passed in response to the second intifada, that has largely stopped Palestinians from the West Bank and the Gaza Strip from living in Israel.

Israel has also taken a relatively hard line on asylum seekers, who in its case come mostly from Eritrea and Sudan. The state has generally deemed these migrants “infiltrators” seeking work, though many have fled persecution and human rights abuses at home, according to human rights groups. Between 2009 and the beginning of 2015, Israel granted refugee status to just five of more than 3,500 applicants, or a fraction of 1 percent. That contrasts with the 84 percent of Eritreans and 56 percent of Sudanese asylum seekers who received either refugee status or extended protection in other countries in 2014, according to the United Nations high commissioner for refugees.

At the same time, Israel has deterred more African migrants from coming and sent out those who have already arrived. As Prime Minister Benjamin Netanyahu boasted in a tweet responding to Trump’s shout-out, Israel in 2014 completed a fence along its border with Egyptian-controlled Sinai. The previous year, Israel built a detention center in the Negev just for the migrants, and it has given cash incentives to tens of thousands to return to South Sudan or go to third countries with which Israel has reached agreements.

“Israel, like the U.S. right now, is violating its obligations to refugees,” said Tally Kritzman-Amir, an expert in immigration law at the College of Law and Business outside Tel Aviv and the academic supervisor of its Clinic for Migrants’ Rights. “If you ask me, part of being Jewish is about remembering what happened to our people in the past, and maybe even being proud that we are able to provide some protection now.”

“Israel is primarily a country of Jewish repatriation. Non-Jewish immigration is supposed to be very limited,” said Alexander Yakobson, a historian at The Hebrew University of Jerusalem. “And yet the number of non-Jewish immigrants here is staggering. This is achieved not through policy but through non-enforcement of immigration laws.”

The law targeting West Bank and Gaza Palestinians and citizens of the four Arab countries allows the interior minister or regional military commanders to make various exceptions. These include the options to grant residency to older Palestinian spouses and citizenship to young children. Citizenship, or a lesser status, can also be granted to someone “of special interest to the State” or who “performed a significant act to promote the security, economy or some other important matter of State.” Such a person, whose family may be included, must identify with “Israel and its goals.”

A 30-year old gay poet who had fled persecution for his sexuality in Iran and professed to be “in love with” Israel was allowed to enter the country last year and stay.

For those who need to enter Israel for work or medical care, temporary visas can be issued. Israeli army medics have brought more than 2,600 Syrians to the country for care, though the state will not recognize them as refugees, and tens of thousands of West Bank Palestinians are permitted to work in Israel, with thousands more coming in illegally.

Even African migrants in many ways have been accommodated. Israel has expelled few, and more than 45,000 are estimated to remain in the country. Several years ago, the state announced it would not enforce employment laws that would prevent them from working. In Tel Aviv, where most of the migrants have settled, they work behind the counters of bars and restaurants on nearly every block, speaking Hebrew with Israeli waiters and waitresses.

Trump’s travel ban has been challenged in U.S. federal courts as discriminatory, with lawyers pointing to his calls as a candidate for a “Muslim ban” as proof. Israel has similarly been accused in its Supreme Court of privileging Jews and discriminating against would-be Palestinian immigrants and African refugees when it comes to immigration. The state’s security arguments have mostly carried the day, with the courts only requiring tweaks to its policies.

A U.S. federal appeals court is expected to rule on the legality of Trump’s travel ban within days, after which an appeal to the Supreme Court is likely.