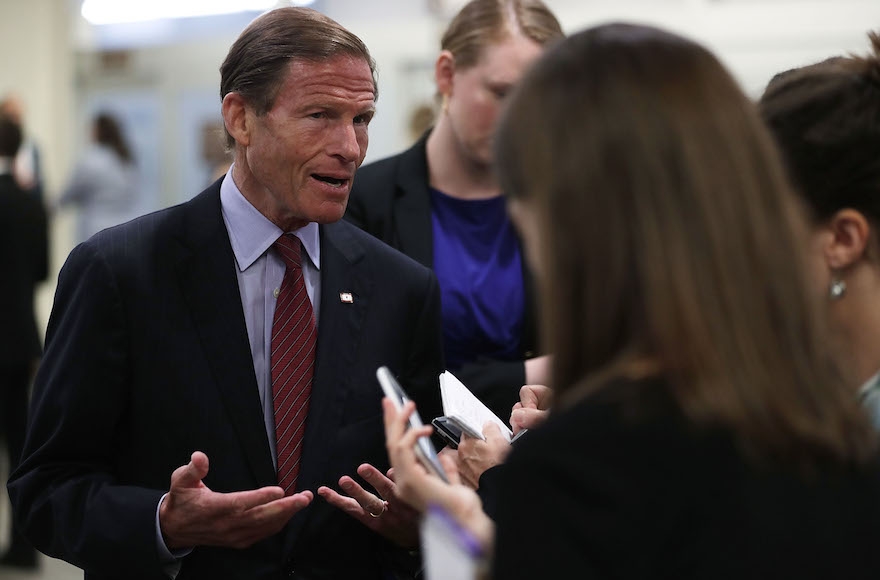 “Sen. Richard Blumenthal, who never fought in Vietnam when he said for years he had (major lie), now misrepresents what Judge Gorsuch told him?” Trump tweeted Thursday morning, a day after Blumenthal said Gorsuch made his remarks in their get-acquainted meeting.

The president was referring to Blumenthal’s run for senator in 2010, when the former state attorney general apologized for what he said was misspeaking on several occasions in appearing to characterize his service in the Marine Corps Reserve as taking place in Vietnam.

Trump avoided any service during the Vietnam era; he has said bone spurs in his feet made him ineligible.

The controversy arose after Blumenthal, who is Jewish, met with Gorsuch, who is an appellate court judge in Denver.

Blumenthal, as well as other senators in their own meetings, asked Gorsuch to comment on Trump’s attack last week on a federal judge who temporarily halted the executive order banning entry to refugees and travelers from seven Muslim-majority countries. Trump, in a tweet, referred to the Seattle-based district justice, James Robart, as a “so-called” judge.

According to Blumenthal, Gorsuch characterized Trump’s attack as “disheartening” and “demoralizing.”

Kelly Ayotte, a former senator who is shepherding Gorsuch through his confirmation hearings, said in a statement that Gorsuch did use the words, but referred generally to attacks on the judiciary.

“He has emphasized the importance of an independent judiciary, and while he made clear that he was not referring to any specific case, he said he finds any criticism of a judge’s integrity and independence disheartening,” Ayotte said.

Blumenthal, speaking to CNN on Thursday morning, said there was “no question” that Gorsuch in the meeting was referring specifically to Trump’s attack on Robart.

Sen. Ben Sasse, R-Neb., confirmed that was also his impression from his own meeting with Gorsuch.

“He got pretty passionate about it,” Sasse told MSNBC, saying he had asked him directly about Trump’s tweet. “He said any attack on, I think his term to me was ‘brothers or sisters of the robe,’ is an attack on all judges.”

Interviewed by NPR, Blumenthal said he urged Gorsuch to make a public statement that Trump’s attacks on the judiciary are not only “disheartening” but abhorrent.

On Thursday, the American Jewish Committee said it was “deeply disturbed” by the tone of Trump’s criticism of federal judges considering the legality of his executive order on refugees.

“President Trump is not the first president to have a major initiative challenged by the courts in the exercise of their constitutional duty to ‘say what the law is,'” AJC General Counsel Marc Stern said in a statement. “But he is the first, certainly in modern times, to so directly attack judges for doing their best to fulfill their judicial oath to ‘administer justice without respect to persons.'”

Added Stern: “What does endanger our democracy are unbridled and unjustified attacks by one branch of government on another, especially when the branch under attack is charged with checking the excesses of the other two. Such attacks are no less a threat to our country than those who would use violence to undermine our democratic institutions.”