Outside the synagogue, intermarried are forming community with each other 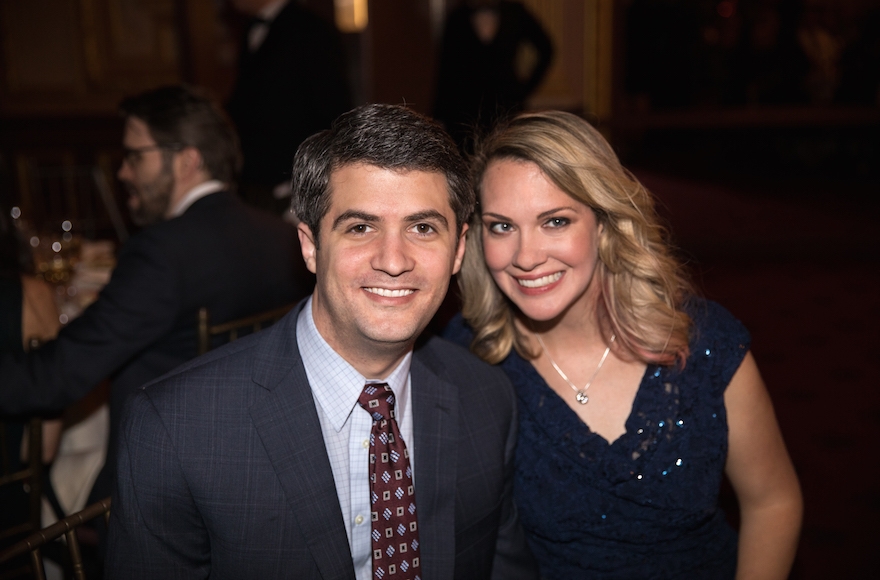 NEW YORK (JTA) — Leading up to their wedding in 2012, Julianne and Jason Kanter hadn’t really discussed how they would incorporate their respective religions into their home.

Julianne was raised by Catholic and Presbyterian parents, while Jason grew up culturally Jewish. At first, it was simple to mark their different backgrounds. In December, the couple celebrated Christmas with Julianne’s relatives and lit a menorah and served latkes at Christmas dinner.

But now that they’re thinking of having kids, the Kanters have started to talk religion more seriously. And they realized they needed a space to learn about Judaism without the expectations that came with joining a synagogue.

“To talk about how are we going to incorporate Judaism into our lives — what does that mean? What will that look like?” Julianne Kanter said. “I didn’t know enough about it to feel comfortable teaching my kids about it.”

Since last year, the Kanters have found Jewish connection through a range of initiatives targeted at intermarried or unaffiliated couples. Last June, they went on a trip with Honeymoon Israel, a Birthright-esque subsidized tour of Israel for newlywed couples with at least one Jewish partner. And in the months since, they have built community at home in Brooklyn through two discussion groups where intermarried couples get together to meet, eat and talk about shared challenges and experiences.

In one group, called the Couples Salon, five to six couples share a light meal, introduce themselves and drop questions they have prepared in advance into a bowl. A moderator who can also participate picks out a question and the group talks — whether about how to deal with familial expectations, how to celebrate holidays or how to share a ritual with your kids. The salons have happened once a month, with different couples, since August.

“We wanted the perspective of people who were in similar situations, which the synagogue is not,” Jason Kanter said. “It was nice to go to a group where everyone was in the same sort of boat. There’s real dialogue rather than someone telling you their opinion of what your situation is.”

A growing number of initiatives are giving intermarried couples a Jewish framework disconnected from synagogue services and outside the walls of legacy Jewish institutions. Instead of drawing them to Judaism with a preconceived goal, these programs allow intermarried couples to form community among themselves and on their own terms. 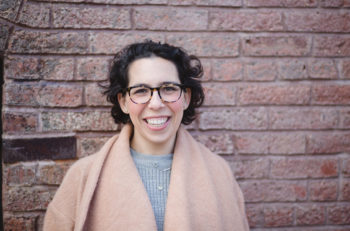 The salons began last year, as did Circles of Welcome, a similar initiative by JCC Manhattan, where five to seven intermarried or unaffiliated couple meets monthly, usually in someone’s home, to learn and talk about Judaism with a rabbi or rabbinical student who serves as “mentor.” In Northern California’s Bay Area, two somewhat older programs, Jewish Gateways and Building Jewish Bridges, offer group discussions, classes and communal gatherings for intermarried couples.

The programs are at once a reaction to rising intermarriage rates and to the rejection that intermarried couples have long experienced from parts of the Jewish community. While most Jews married since 2000 have wedded non-Jews, the Conservative and Orthodox movements do not sanction intermarriage, while the Reform movement, the most welcoming to intermarrieds of the three largest Jewish denominations, encourages conversion for the non-Jewish spouse.

“Because of the history of interfaith families not being welcomed and not being accepted … that has meant, in some instances, for interfaith families that want to experience Jewish life, they have to figure that out using other resources,” said Jodi Bromberg, CEO of InterfaithFamily, which provides resources for intermarried couples “exploring Jewish life and inclusive Jewish communities.”

Often, said Honeymoon Israel co-CEO Avi Rubel, intermarried couples also have friends from a range of backgrounds. So they’re uncomfortable with settings that, by their nature, are not meant for non-Jews.

“When it comes to building community and meeting other people, people want to bring their whole selves into something,” Rubel said. “Which often in America means being inclusive of non-Jews and other friends. When they’re at a Jewish event, they don’t want it to feel exclusionary.”

Mainstream Jewish organizations have become more supportive of including intermarried families. Several Conservative rabbis have voiced support for performing intermarriages, and the movement is set to allow its congregations to accept intermarried couples as synagogue members. Honeymoon Israel, launched in 2015, is funded by various family foundations and Jewish federations.

But organizers of the independent initiatives, and intermarried couples themselves, say even a welcoming synagogue can still be an intimidating space. The couples may not know the prayers or rituals, may feel uncomfortable with the expectation of becoming members, or may just feel like they’re in the minority.

“It’s a privilege of inmarried Jews with children in any social circumstance,” said Steven M. Cohen, a Jewish social policy professor at Hebrew Union College-Jewish Institute of Religion, referring to synagogue membership. “The people that fit the demographic of the active group are the people who feel most welcome.”

Rabbi Avram Mlotek, a Circles of Welcome mentor and Orthodox rabbi, says his movement’s staunch opposition to intermarriage doesn’t come into play as he teaches couples about Judaism.

“Because of my own commitment to my understanding of halacha, there will be areas in which the couples and I will not see eye to eye,” he said, using a Hebrew term for Jewish law. “But that’s like the 10th or 15th conversation. That’s not the first or second or third or even fifth. There’s so much more to learn about them, and for me to be able to share also about myself, before even getting to that point.”

That doesn’t mean intermarried Jews will remain forever separate, said Rabbi Miriam Farber Wajnberg, who runs Circles of Welcome at the JCC Manhattan. She sees the program as a stepping-stone to a time when the larger community is more open to non-Jewish spouses.

“We expect and hope that this program won’t need to exist in the future, that we won’t need to create a special program to help couples get access to Jewish life,” she said. “It will just be happening automatically.

But Julianne Kanter, who facilitated her own Couples Salon on Feb. 8, isn’t sweating over which synagogue to join. She said that for now, she and her husband feel a sense of belonging in the intermarried groups that have formed.

“To me, I feel like these are the people who get us,” she said. “This is our community, and we’re just really lucky.”