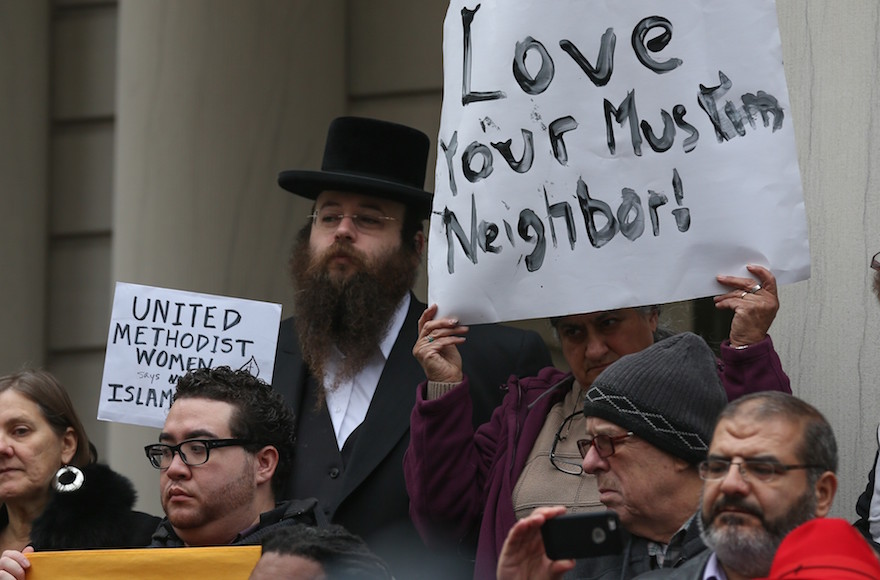 NEW YORK (JTA) — Alexander Rapaport, a Brooklyn Hasid, says his experience being the victim of anti-Semitism forces him to call out hatred against others. So Rapaport, who runs a network of kosher soup kitchens, helped organize a communal show of support last week for a local Yemeni-owned bodega in reaction to President Donald Trump’s executive order temporarily banning immigration from seven Muslim-majority countries.

Not everyone was happy about the gesture.

“I received your solicitation letter in the mail along with this phone number,” read a text message he received Wednesday. “After seeing, though, that you protested President Trump’s executive order, and thus shamefully sided with those who are putting American lives in danger, I am no longer able to donate to your organization.”

The message, Rapaport told JTA, was referring to a fundraising letter he sent a few weeks ago to about 1,500 “top donors” — those who had given a one-time three-figure donation to the New York-based Masbia Soup Kitchen Network.

Today I am in support of the #YemeniteBodega in #BoroPark!

Rapaport, who lives in the strongly Hasidic Borough Park neighborhood, said that other donors approached him in the street to complain about his stance on immigration following his show of support for the shop. Last week, after Yemeni-American bodega owners organized a strike to protest the president’s temporary travel ban, Rapaport showed his support by going to a local store with other community members and pasting Post-it notes with “messages of love and solidarity” on its storefront.

This isn’t the first time Rapaport’s outspokenness has angered donors.

The 38-year-old father of seven has gotten complaints after he spoke up for immigrants previously and lost funders who were unhappy that the strictly kosher soup kitchen serves anyone who wants a meal, regardless of religious background.

In December 2015, Rapaport attended a protest at New York City Hall following a call by Trump, then a presidential candidate, for “a total and complete shutdown of Muslims entering the United States.”

While Rapaport has considered being less outspoken, he said hiding his views wouldn’t be honest.

“I don’t want to take anyone’s money under false pretense. Yes, I am personally very pro-immigrant, and if that makes me unqualified for your donation, please don’t give it to me,” he told JTA.

As a hasidic jew I felt the importance to stop by at my local bodega to show support 4 #MyYemeniNeighbor Sami & Mohammad. #BodegaStrike 🇮🇱🇾🇪 pic.twitter.com/HNMAA98j0X

The complaints come at a critical time for Masbia, which is seeking to raise $250,000 to complete renovations for its Queens location.

Masbia is now serving meals outside the old Queens building, which is being demolished, but weather conditions in the winter can make it impossible. That means on some days, the over 200 people served dinner by the soup kitchen may go hungry.

“We are serving hot food on the street in front of our old site, right under the scaffolds of that building,” Rapaport said. “This is not the way we want to feed people.”

News of the donor pushback, however, spurred some to increase their giving, such as Rabbi Jonah Geffen, whose Upper West Side synagogue has hosted a fundraiser for Masbia.