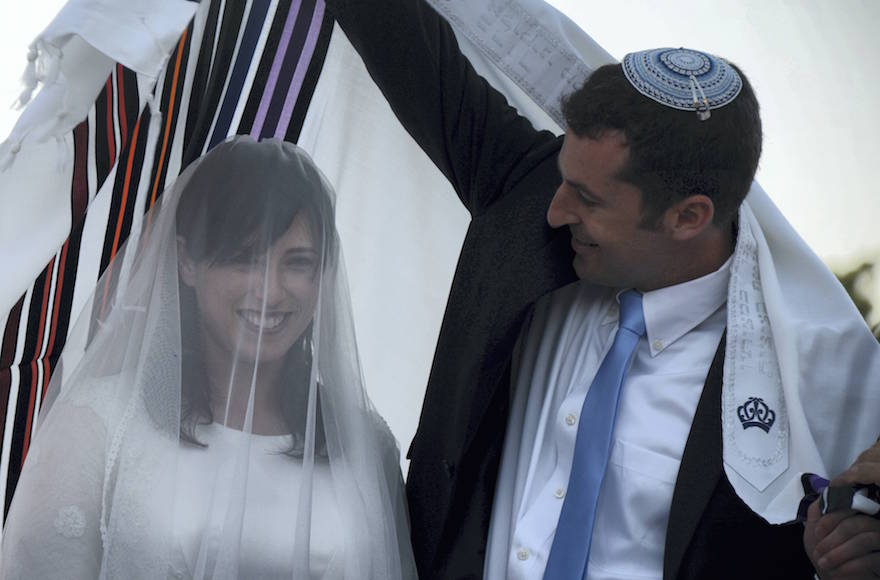 Israel's Deputy Transportation Minister Tzipi Hotovely stands with her husband-to-be Or Alon underneath a tallit during their wedding at the Ronit Farm in the Sharon plain, central Israel, May 27, 2013. (Yossi Zeliger/Flash 90)
Advertisement

JERUSALEM (JTA) — A majority of Jewish Israelis support allowing civil marriage and divorce in Israel, according to a survey released for Valentine’s Day.

Some 72 percent of Jewish Israelis and 76 percent of Arab Israelis support the statement that “every resident [of Israel] has the right to get married in Israel with whomever he chooses, in whatever way he chooses, and according to his beliefs,” but at the same time, only 43 percent of the Arab-Israeli public support allowing civil marriage and divorce in Israel, according to the poll released Tuesday by Hiddush, an organization that promotes religious pluralism in Israel.

The two surveys of Israelis also found that 67 percent of the Jewish public would still prefer to have Orthodox weddings for themselves and their children as long as no marriage alternatives are recognized by the state, with 16 percent preferring to get civilly married abroad and 17 percent preferring to cohabitate without getting officially married. In contrast, 88 percent of Arab Israelis would prefer to have religious marriages.

In addition, 60 percent of Arab respondents aged 25-34 support instituting civil marriage and divorce, compared to only 27 percent of Arabs 65 and older.

To be recognized by the state currently, all marriage ceremonies  must be conducted by religious authorities of state-recognized religious communities to which both members of the couple belong. Jewish Israelis can only legally marry through the Chief Rabbinate, while the religious authorities for the Christian, Druze and Muslim populations regulate the rites of marriage and divorce in their respective communities.

Israel does not have a legal framework for civil marriage or divorce, same-sex unions, marriage between two individuals who belong to different religions or for marriage when either of the two partners is registered as “having no religion.”

Rabbi Uri Regev, who heads Hiddush, told JTA he believes there would be more enthusiasm for civil marriage and divorce from all sectors if it actually existed in Israel.

Regev noted that with only 12 percent of Arab Israelis polled identifying themselves as secular, the country’s Arab population is much more conservative and religious than its Jewish population. But he added that is not why there is no civil marriage in Israel.

“Ultimately, Israel does not have marriage freedom because of the Jewish Orthodox parties and not because of the position of the Arab sector,” Regev told JTA. “When we are able to overcome the Orthodox Jewish extortion, met willingly by the non-religious Israeli Jewish parties, we will be able to advance marriage freedom even if the majority of the Arab sector will maintain their disapproval.”

“We were astounded by the results of the survey which negated many stigmas,” said Neemanei Torah Va’Avodah chairman Chanan Mandel in a statement. “Officials elected by the religious public are simply unaware of the current stance and opinion of their constituents. In this present reality which distances so many Israelis from their Judaism, we believe that religious Knesset Members must be informed of the feelings of their voters and act accordingly.”