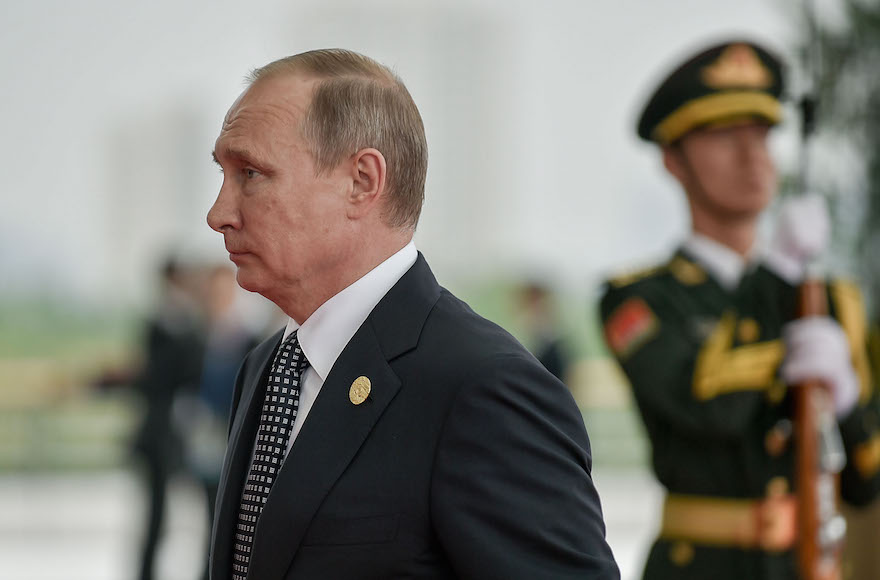 (JTA) — Israel’s ambassador in Moscow criticized Russia for blocking the international adoption of a definition of anti-Semitism, which he linked to a recent string of allegedly racist statements about Jews by Russian politicians.

Gary Koren made his unusual statement on anti-Semitism in Russia in an interview with Interfax, the news agency reported Wednesday. Koren singled out Russia for blocking the definition’s adoption by the Organization for Security and Cooperation in Europe, an intergovernmental group of 57 member states.

“The OSCE has attempted to determine a text, which ought to define what can be classified as anti-Semitism and what its working definition is,” the envoy said. “We are discussing this issue with the Russian Foreign Ministry and hope that Russia will adopt this definition in the future.”

Israeli ambassadors to Russia rarely comment on issues that do not involve Israel and bilateral relations directly.

Koren’s statement came as confirmation to reports, including by the president of the Board of Deputies of British Jews, Jonathan Arkush, that Russia was the only country blocking the adoption of the definition, which is controversial because it lists some forms of hate speech on Israel as an example of anti-Semitism.

“All the other countries accepted the definition but Russia,” Arkush revealed during an address Feb. 4 at the Limmud FSU Europe conference on Jewish learning in London. “I expect we will see some diplomatic action on Israel’s part in the near future on this issue.”

In the Interfax interview, Koren added an apparent reference to a recent spate of incidents involving Russian politicians who used what critics regard as anti-Semitic hate speech.

Russia’s endorsement of the definition “will be clarified for people who try to justify themselves by saying that their statements allegedly hold no insult to the Jews,” Koren said.

This week, a lawmaker in the state parliament of St. Petersburg, Vitaly Milonov, said that Christians survived despite how ancestors of Boris Lazarevich Vishnevsky and Maxim Lvovich Reznik, two Jewish Russian lawmakers serving in the same parliament, “boiled us in cauldrons and fed us to animals.”

The previous month Peter Tolstoy, a lawmaker in the federal parliament, appeared to blame Jews for anti-religious persecution under communism. He referred to the descendants of people who in 1917 “jumped out of the Pale of Settlement” – the area beyond which Jews were not allowed to live in Czarist Russia — to try to “topple our churches.”

Both men denied that their statements, which Russian Jews strongly condemned, were anti-Semitic.

The definition that reportedly is being blocked by Russia resembles the one recently adopted by the International Holocaust Remembrance Alliance, an intergovernmental agency of 31 Western nations. That definition also was adopted last year by the British government after the European Union’s agency for fighting racism removed from its website a similar text that it called its “working definition” of anti-Semitism amid protests by pro-Palestinian groups against the reference to Israel.