Security at summer camps: What you need to know 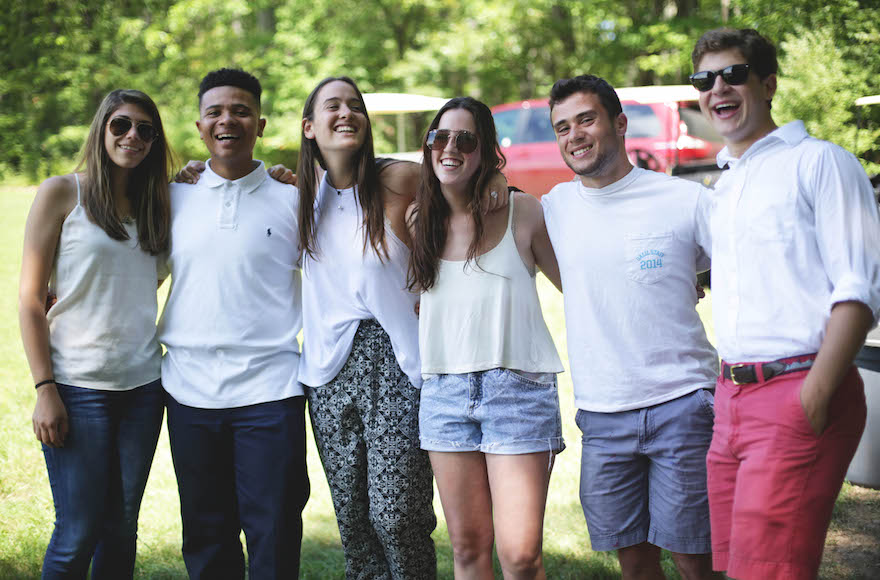 Pre-camp staff training is critical when it comes to security, according to experts and camp directors. Pictured here are staff at Camp Harlam in Pennsylvania, one of the Union for Reform Judaism's 16 summer camps. (Courtesy of Camp Harlam)
Advertisement

(JTA) — Chicagoan Christie Tate isn’t one to be easily cowed.

A lawyer and writer, Tate lives with her husband and two kids on the city’s South Side, which has seen a surge in violent crime over the past year. Last year, her kids got a day off from school because of an active shooter threat. Over the summer, someone was murdered in her alley.

But while Tate doesn’t want to change her lifestyle out of fear, the recent spate of bomb threats at Jewish community centers across the country gave her pause as she considered whether to send her kids back to a JCC camp this summer.

“I don’t believe that we should go running and alter our lives and our summer plans because of threats,” Tate told JTA. “But then when I was doing my research, I saw the pictures of the kids standing on the sidewalk during a bomb threat, having been evacuated — it just became more real. I just thought, ‘Oh my God.’ I was swayed by that, which is probably a problem.”

Despite the wave of recent threats against Jewish institutions, coupled with a spike in anti-Semitic activity in recent months, no one has been seriously injured by a security breach at an American Jewish summer camp. The worst incident many camp leaders could remember was in 2012, when a group of intruders drove through a religious camp in Pennsylvania yelling anti-Semitic slurs and damaging property.

But many Jewish camp leaders aren’t taking any chances.

“The foundation of our success is all about the sacred trust that exists between our parents, our campers and our communities and our camps,” said Paul Reichenbach, director of camping and Israel programs for the Union for Reform Judaism, which operates 16 summer camps across the country. “Parents have to have confidence that the people and place to where they’re going to send their children, in whom they’re going to entrust their children, has as their highest priority their child’s welfare.”

As with many Jewish summer camps, the Reform movement’s security efforts were beefed up significantly following the 9/11 terrorist attacks in 2001. The movement launched a security manual for their camps, created specific job requirements for camp safety personnel and established protocols for responding to a range of threats. It also retained the services of an Israeli security firm, which recommended security improvements from entrance gates to lighting and video surveillance. The camp’s security protocols are reviewed and updated annually.

Many involved in security at Jewish camps say that training and advance preparation are key — perhaps even more important than guards or barriers, both of which are increasingly common.

Among the preparedness steps camps are taking: the development of protocols that determine who does what in the event of an emergency. Preseason security training for camp staff has become commonplace. Camp leaders are also strengthening their relationships with local law enforcement, and many law enforcement agencies conduct annual site visits to familiarize themselves with the camp environment and provide advice.

“In the end, it’s all about training,” said Jeremy Fingerman, CEO of the Foundation for Jewish Camp. “Training itself builds awareness. You can never train enough. By continuing to train you’re building that sort of level of awareness.”

Security at summer camps presents a number of unique challenges not faced by urban Jewish institutions, which typically have a defined perimeter and controlled access points. Camps are open, their borders often marked by little more than a tree line, and everyone involved in their security acknowledges the need to strike a balance between safety and preserving the sense of freedom and openness emblematic of the camping experience.

They also have to contend with an evolving security climate. While radical Muslims presented the foremost security challenge in the wake of 9/11, that is no longer the case. Many camp leaders noted the case of Anders Breivik, who gunned down 69 Norwegians at a summer camp on the island of Utoya in 2011, as well as the Sandy Hook school shooting in 2012.

“My concern is not just from jihadists anymore,” said Paul Goldenberg, the director of the Secure Community Network, the organized American Jewish community’s security arm. “We’re starting to see a real uptick from the white supremacist side of the house right now. Some of these people are calling for death to the Jews. It’s pretty serious.”

Goldenberg stressed that he knows of no specific threats against Jewish camps and would not hesitate to send his own grandchildren to one, a sentiment shared by many other Jewish camp directors. And while most directors contacted for this story were hard-pressed to name a single serious security breach at a Jewish summer camp, a handful of recent incidents have raised the alarm.

In the summer of 2012, several intruders drove through Camp Bonim, a religious boys camp in rural Pennsylvania, according to local police who later arrested five suspects. In 2015, it was Camp Agudah Midwest, a religious camp in Michigan, where two vandals spray-painted a swastika and damaged a building, according to The Associated Press. That incident came two weeks after an attack at upstate New York’s Camp Karlin Stolin, in which three teenagers threw bottles and coins at campers and staff.

Officials at all three camps declined JTA’s request for comment. But security experts say the incidents only serve to highlight the dangerous level of unpreparedness at some Jewish summer camps.

“If anything, the risk has continued to rise,” said Joshua Gleis, a security consultant who works extensively with Jewish institutions. “I do think that camps certainly need to continue to button up security as you see schools, houses of worship, community centers doing right now. Many camps are not taking the actions that I think they should. While many have been improving, I know many camps that have still not changed their security structure significantly.”

Camp Seneca Lake in Honesdale, Pennsylvania, isn’t one of them. On the advice of the State Police, camp owner Irv Bader now has guards check all trucks entering the camp for deliveries. The camp has also hired 24-hour armed security — “not rent-a-cops,” Bader said — and installed a network of security cameras that are monitored around the clock. At night, the camp is illuminated with high-wattage lighting.

“It looks like daylight in the camp,” Bader said.

“I do it because it’s necessary,” he said of his security precautions. “The world is crazy today. And you’ve got too many crazies around. It’s a deterrent.”

Despite the heightened sensitivity, many camp directors say the most common threat to the well-being of campers comes not from violent attack, but from the weather.

Jamie Simon, the director of Camp Tawonga in Northern California, said she is far more concerned about an earthquake than an intruder. (In July 2013, her camp was hit by tragedy when a counselor died after a tree fell on her.) Still, the camp installed a video camera last year at its front gate so it can screen visitors remotely.

Camp Tamarack in Michigan is taking the camera tool even further. New technologies allow surveillance systems to learn about normal movement in an area and send an alert when it detects something anomalous.

For a camp like Tamarack, that sort of assistance is invaluable. The facility is among the largest Jewish residential camps in the country, covering over 1,000 acres and 400 structures.

“It’s a force multiplier,” said Gary Sikorski, the director of communitywide security for the Jewish Federation of Metro Detroit. “You can monitor areas that would be almost impossible to monitor with an individual.”