Trump and Netanyahu: The mixed messages of a diplomatic lovefest 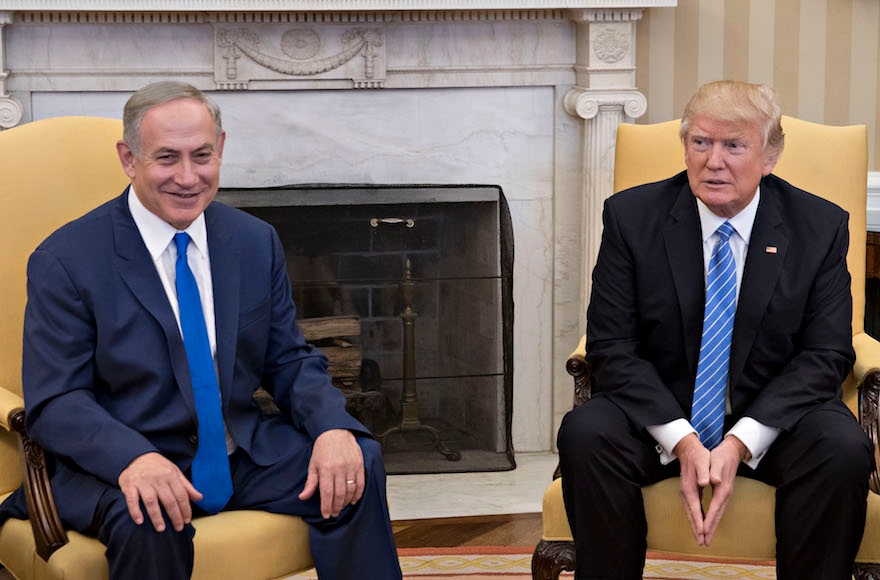 In the Age of Trump, every post-event analysis requires a double take. Not so much “did he mean what he said?” – he appears to mean it, in real time – but “will he mean it next week? Tomorrow? In the wee hours, when he tweets?”

This is a president who, after all, speaks of a “ban” on travelers from Muslim-majority countries and then deploys his spokesmen to insist there is no ban, and by the way, don’t mention Muslims either.

So what can we take away from Wednesday’s Netanyahu-Trump summit?

A lot. Trump’s interlocutor on Wednesday, Netanyahu, has a more evolved reputation for consistency — indeed, for coherence. And despite his renowned capacity for peregrinations of thought, Trump offered enough substance in his remarks – for instance, confirming a pivot in U.S. policy away from an emphasis on a two-state solution as an outcome to Israeli-Palestinian peace talks.

So, with considerable trepidation, we venture into Wednesday’s summit.

At first blush, Trump appeared to headily embrace the prospect of one state – although it’s not clear what kind of single state he meant. Would Palestinians in the West Bank be enfranchised?

Comb through what he said, and his departure from the policies of his three predecessors was indeed substantive, but not necessarily radical.

“So I’m looking at two-state and one-state, and I like the one that both parties like,” he said, as Netanyahu chortled.

Trump is not endorsing a single state – he’s kicking it back to the parties: Figure it out, Trump says. Trump’s three predecessors have also said that the final status must be determined by the Israelis and the Palestinians, but also have made clear that the only workable outcome is two states.

What’s the difference? Netanyahu, in his remarks and briefing Israeli reporters after his three-hour summit with Trump, indicated that the difference is leverage for Israel: If the Palestinians want their own state, it must adhere to Israel’s terms.

Netanyahu has always said that he believes a Palestinian state should recognize Israel as a Jewish state, and that it must be demilitarized and accept Israeli security control of the West Bank. Until now, those were his preferred outcomes. On Wednesday, he attached a new descriptor to those terms: “prerequisites.” That leaves little wiggle room for the Palestinians.

The Israeli leader, notably, also did not use the term “two states” and refused to afterward in his briefing with reporters. Netanyahu said instead that others, including former Vice President Joe Biden, have cautioned him that a state deprived of security control is less than a state. Instead of pushing back against the argument, he said it was a legitimate interpretation, but not the only one.

That relieves pressure from Netanyahu’s right flank in Israel, which has pressed him to seize the transition from the Obama administration – which insisted on two states and an end to settlement – to the Trump administration and expand settlement. Now he can go home and say, truthfully, that he has removed “two states” from the vocabulary.

The kid in the candy shop

Netanyahu was like the proverbial kid in the candy shop: He couldn’t have made clearer his relief at the departure of President Barack Obama.

“I think that’s a change that is clearly evident since President Trump took office,” Netanyahu said at the joint press conference, referring to Trump’s tough talk on Iran. “I welcome that. I think it’s — let me say this very openly — I think it’s long overdue.”

And not just regarding Iran. Whereas with Obama, Netanyahu would insist peace talks must take place without preconditions, he was now talking about “prerequisites for peace” with the Palestinians.

Trump, to Netanyahu’s evident pleasure, embraced one of the Israeli’s favorite causes: Palestinian incitement. Obama had also routinely mentioned the issue, but Trump made ending incitement his front and center expectation of the Palestinians, and described it in the dark terms Netanyahu favors.

“I think the Palestinians have to get rid of some of that hate that they’re taught from a very young age,” he said. “They’re taught tremendous hate.”

Netanyahu told Israeli reporters that he also asked Trump to recognize the Golan Heights as Israeli territory, a request that would have been politely ignored had he raised it with any of Trump’s predecessors. He was clearly hopeful about his prospects with Trump; the president was “not shocked” by the request, Netanyahu said.

Beware the candyman: What does Donald want in return?

“I’d like to see you hold back on settlements for a little bit,” Trump told Netanyahu. “We’ll work something out.”

Netanyahu appeared shocked. Trump asked Netanyahu for a temporary settlement freeze, the kind of request that when Obama made it sent Netanyahu and his government into paroxysms of resistance. (Netanyahu insisted to reporters later that his shocked reaction was a put-on – he said it was a page out of Trump’s bible for realtors, “The Art of the Deal,” but he did not explain how looking caught off guard helped him.)

Netanyahu did another double take when Trump said, referring to his hopes for a comprehensive peace with the Palestinians and with Israel’s Arab neighbors, that “it might be a bigger and better deal than people in this room even understand.”

Netanyahu, notoriously cautious and small-bore in how he approaches diplomacy, did not seem enthusiastic.

Trump noticed: “Doesn’t sound too optimistic,” he said to laughter.

Those snapshots of a nonplussed Netanyahu illustrated the Israeli leader’s conundrum: He is throwing all-in with Trump.

The request to stay settlement building, to go for the big deal, one that Trump said would likely require Israel to “show more flexibility than they have in the past” – what could that mean further down the line? Trump’s proven characteristics include a capacity for unpredictability, a demand for deference and a love of disruption.

Mix those qualities with talk of one state and “greater flexibility,” and the prospects of what Trump demands from Israel are more open-ended than with any previous president – for better or worse.

Lots of tough talk at the press conference.

“I think, beyond that, President Trump has led a very important effort in the past few weeks, just coming into the presidency,” Netanyahu said. “He pointed out there are violations, Iranian violations on ballistic missile tests.”

So did Obama, when Iran tested missiles on his watch. What more could Trump do? No one offered specifics, and Netanyahu told reporters later the time was not ripe to offer specifics. How would they address the deal Obama reached, trading sanctions relief for Iran’s nuclear rollback, that they both reviled? Amend it? Enforce it? Trash it? No specifics.

Same when it came to the Islamic State terrorist group, also known as ISIS.

“You call for the defeat of ISIS,” Netanyahu said. (So did Obama.) “Under your leadership, I believe we can reverse the rising tide of radical Islam.”

Love may drive us apart

An Israeli reporter asked Trump about a spike in anti-Semitic incidents since his election, and wondered what Trump had to say “to those among the Jewish community in the States, and in Israel, and maybe around the world who believe and feel that your administration is playing with xenophobia and maybe racist tones.”

Trump, after yet another bizarre digression on the breadth of his electoral college win over Hillary Clinton, reminded everyone that he had Jewish friends and family and concluded that “you’re going to see a lot of love.”

And Netanyahu, who usually is not reluctant to emphasize the vulnerabilities of Diaspora Jews, backed up Trump.

“I’ve known the president and I’ve known his family and his team for a long time, and there is no greater supporter of the Jewish people and the Jewish state than President Donald Trump,” he said. “I think we should put that to rest.”

That’s hardly a salve to an American Jewish community dealing almost weekly with unsettling echoes of past slights and intolerance – most recently when the White House omitted any mention of Jews from a Holocaust commemorative statement.

Jonathan Greenblatt, the Anti-Defamation League’s national director, reacting to Trump’s statement, did not mention Netanyahu, but was clearly not in a mood to put anything to rest. Trump “missed an opportunity to decry the rhetoric of hate that seems to be surging online and in the real world,” he said. “Intentional or not, this emboldens anti-Semites.”