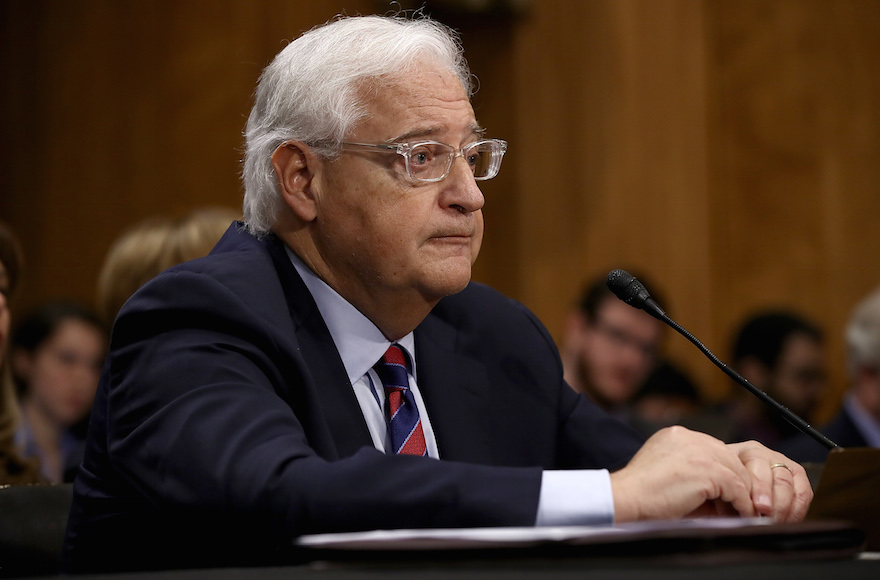 WASHINGTON (JTA) — David Friedman at the launch of U.S. Senate hearings to confirm him as ambassador to Israel said there was “no excuse” for his past rhetoric targeting liberal Jews.

In his opening remarks, Friedman said his attacks were “partisan rhetoric” during a heated presidential election campaign. Friedman is Trump’s longtime lawyer and was a key surrogate to the Jewish community during the campaign.

Sen. Ben Cardin, D-Md., the ranking member of the Foreign Relations committee, which must approve Friedman to advance his nomination to the full Senate, said the terms seemed to go beyond partisan rhetoric.

Cardin said he and Friedman had in common that “our parents were proud Zionists who worked and did everything they could in support for the State of Israel.” But noting his father was the president of a synagogue – Friedman’s was a rabbi – Cardin added, “My father taught me to respect different views.”

The Maryland lawmaker also noted that some of Friedman’s statements – particularly his attack on Schumer, made during the heat of the battle over the 2015 Iran nuclear deal – came before the campaign and in many cases were written comments.

“I’m having difficulty understanding your use of those descriptions and whether you really can be a diplomat,” Cardin said.

“I provided some context for my remarks, but that was not in the nature of an excuse,” he said. “These were hurtful words and I deeply regret them. They’re not reflective of my nature and character.”

Cardin also pressed Friedman about past statements that appeared to oppose a two-state solution addressing the Israeli-Palestinian conflict and noted his backing for settlements, including some deep inside the West Bank.

Friedman replied that he had been skeptical of a two-state solution, but would welcome any solution arrived at by the Israelis and Palestinians that ended suffering for both peoples.

Protesters interrupted the hearings at least three times, including by a contingent from the Jewish protest group If Not Now who sang as they were ejected “Olam Chesed Yibaneh,” “Build a world of kindness.”