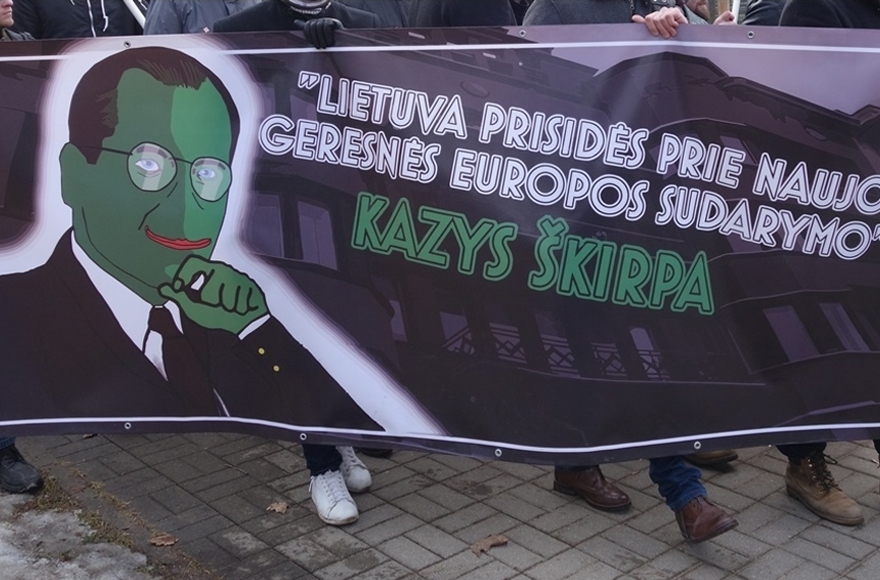 (JTA) — Lithuanian ultranationalists marched near execution sites of Jews with banners celebrating a pro-Nazi collaborationist who called for ethnic cleansing and a symbol popular with members of the U.S. “alt-right” movement.

The main banner featured a picture of the collaborationist Kazys Skirpa modified to resemble Pepe the Frog, a cartoon figure that was used by hate groups in the United States during the 2016 presidential elections, according to the Anti-Defamation League.

The banner also included a quote attributed to the Pepe-like portrait of Skirpa, an envoy of the pro-Nazi movement in Lithuania to Berlin, that read “Lithuania will contribute to new and better European order.”

Skirpa, who has a street named for him in Kaunas, “elevated anti-Semitism to a political level” that “could have encouraged a portion of Lithuania’s residents to get involved in the Holocaust,” the Genocide and Resistance Research Center of Lithuania asserted in 2015. But Skirpa “proposed to solve ‘the Jewish problem’ not by genocide but by the method of expulsion from Lithuania,” the center said.

The procession passed near the Lietovus Garage, where in 1941 locals butchered dozens of Jews. Thousands more were killed in an around Kaunas by local collaborators of the Nazis and by German soldiers in the following months.

“Kaunas is ground zero of the Lithuanian Holocaust,” Dovid Katz, a U.S.-born scholar and the founder of Defending History, told JTA on Friday. He condemned local authorities for allowing the march by “folks who glorify the very Holocaust-collaborators, theoreticians and perpetrators who unleashed the genocide locally.” Katz was one of five people who attended the march to protest and document it.

Lithuania is the only country that officially defines its domination by the former Soviet Union as a form of genocide. The name of the state-funded entity that wrote about Skirpa in 2005 refers both to the Holocaust and the so-called Soviet occupation.

The Museum of Genocide Victims in Vilnius, which until 2011 did not mention the more than 200,000 Lithuanian Jews who died in the Nazi Holocaust, was established in 1992 to memorialize Lithuanians killed by the Nazi, but mostly Soviet, states.

Another placard seen at the march on Feb. 16, one of Lithuania’s two independence days, featured a list of 33 names, supposedly of Jews who allegedly were involved in Soviet repression. “Information on Jews and Vanagaite,” the poster also read. In previous years, marchers also displayed Nazi swastikas.

Vanagaite referred to Ruta Vanagaite, a Lithuanian writer who last year co-authored an influential book about the Holocaust in Lithuania with Nazi hunter Efraim Zuroff of the Simon Wiesenthal Center. The book triggered an acrimonious public debate about the longtime taboo issue of local complicity in the Holocaust.