The Hall of Names at the Yad Vashem Holocaust museum in Jerusalem. (David Shankbone/Wikimedia Commons)
Advertisement 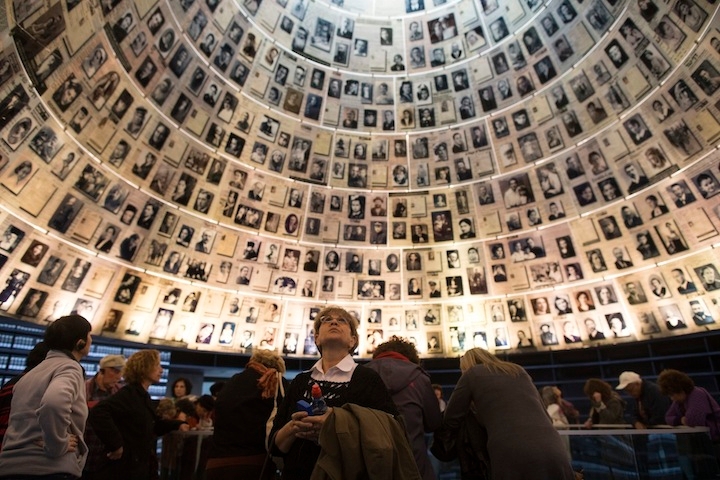 Yaffa Eliach is probably best known for creating the “Tower of Faces,” a permanent display of approximately 1,000 reproductions of prewar photographs of Jewish life in the southeastern Lithuanian village of Eishishok at the U.S. Holocaust Memorial Museum in Washington, D.C. (Uriel Sinai/Getty Images)

JERUSALEM (JTA) — The personal collection of Holocaust documentation of survivor and historian Yaffa Eliach was dedicated at the Yad Vashem memorial and museum in Jerusalem.

Eliach dedicated her life to documenting the events and victims of the Holocaust, particularly the pre-World War II life in her birthplace, the Lithuanian town of Eishishok. Eliach died in November at 79.

The collection spans a half-century of recorded testimonies, transcripts, diaries, authentic memoirs and original documents in English, Hebrew, Polish, German, Russian and Yiddish; individual photographs and photo albums; and articles Eliach composed regarding the history of Eastern European Jews in general and in Eishishok.

It is being cataloged as an independent archival division, available to both researchers and the greater public, according to Yad Vashem.

Eliach published several books about the Holocaust, but is widely renowned for “The Tower of Faces,” an exhibit featured at the U.S. Holocaust Memorial Museum in Washington, D.C., featuring 1,500 photographs of the approximately 3,500 Jews murdered in her hometown.

The collection is described on the Yad Vashem website: “The arrival of the comprehensive collection fulfills Prof. Eliach’s desire for her lifetime’s work to be preserved in a safe haven at Yad Vashem in Jerusalem, and her archives will take an honored place among Yad Vashem’s other archival collections conserved for future generations.”