After much prodding, Trump condemns anti-Semitism 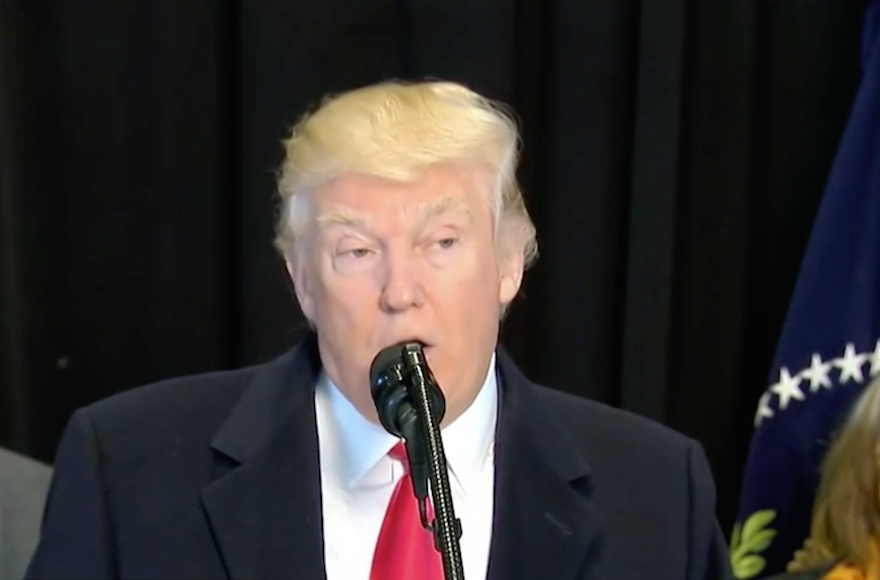 President Donald Trump speaking after a visit to the National Museum of African-American History and Culture in Washington, D.C., Feb. 21, 2017.(Screenshot from MSNBC)
Advertisement

(JTA) — President Donald Trump denounced anti-Semitism a day after bomb threats were made to 11 Jewish community centers across the country and a large-scale cemetery was vandalized in the St. Louis area.

Under pressure to condemn anti-Semitism in the wake of what has been called an uptick in incidents since he was elected, Trump told MSNBC on Tuesday morning, “Anti-Semitism is horrible and it’s going to stop, and it has to stop.”

The president made the remarks at the National Museum of African-American History and Culture in Washington, D.C., after taking a tour. His daughter Ivanka was with him on the tour; a day earlier she had called for the protection of religious institutions in a tweet using the hashtag #JCC.

Asked by reporter Craig Melvin if his statement meant he was denouncing anti-Semitism “once and for all,” Trump replied: “Of course, and I do it whenever I get the chance to do it.”

Last week, Trump was asked during a news conference about the prior JCC bomb threats and what the government’s response would be to “an uptick in anti-Semitism.” Although the reporter did not suggest Trump was anti-Semitic, the president answered by denying he is an anti-Semite and called the question “insulting.” He ordered the reporter to sit dowm, and did not answer the question.

Jewish groups and political leaders have called on Trump to speak out against anti-Semitism, especially after four waves of bomb threats called in to dozens of JCCs across the country in the past five weeks. After yesterday’s bomb threat hoaxes were reported, officials at various Jewish groups, including the American Jewish Committee, the Anti-Defamation League and the Zionist Organization of America, issued remarks urging the president to make a personal condemnation of anti-Semitism.

Reading prepared remarks, Trump called the museum  “a meaningful reminder of why we have to fight bigotry, intolerance and hatred in all of its very ugly forms. The anti-Semitic threats targeting our Jewish community and our Jewish community centers are horrible, are painful and they are a reminder of the work that still must be done to root out hate and prejudice and evil.”

On Tuesday morning, Trump’s opponent in the 2016 election, Hillary Clinton, called on Trump to condemn anti-Semitism.

“JCC threats, cemetery desecration & online attacks are so troubling & they need to be stopped. Everyone must speak out, starting w/ @POTUS,” she tweeted.

JCC threats, cemetery desecration & online attacks are so troubling & they need to be stopped. Everyone must speak out, starting w/ @POTUS.