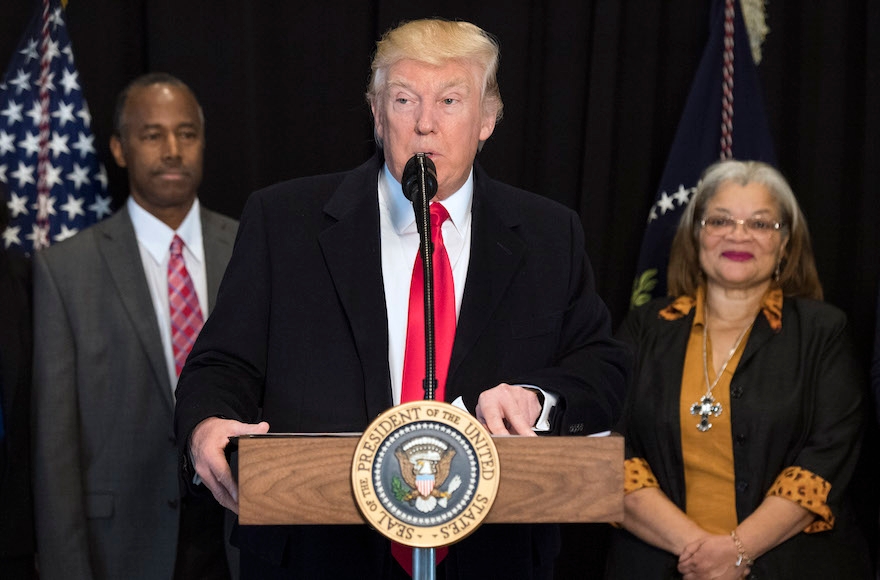 WASHINGTON (JTA) – He hates it, he really hates it. Now what’s he going to do about it?

“The anti-Semitic threats targeting our Jewish community at community centers are horrible and are painful and a very sad reminder of the work that still must be done to root out hate and prejudice and evil,” Trump said Tuesday after touring the National Museum of African American History and Culture.

Message back from a Jewish community longing to hear these words: Great. Now how do you plan on dealing with the problem?

“Glad @POTUS stated #antisemitism is horrible,” Jonathan Greenblatt, the Anti-Defamation League CEO, said on Twitter, using the acronym for president of the United States. “Now need @whitehouse to share plans on how to ‘stop’ it. ADL ready to help.”

David Harris, the American Jewish Committee CEO, explained why Jewish groups that might otherwise have welcomed a simple statement of intent to combat anti-Semitism were sounding a more skeptical tone.

“To date, the administration’s response has been disappointing, to say the least,” Harris said in an email to JTA.

“We’ve only just reached the stage today — thankfully, if belatedly — of hearing President Trump acknowledge the issue and call it by its rightful name — anti-Semitism,” he said.

“For reasons that escape me, until now it’s been about generic words like ‘hatred’ and ‘intolerance,’ or about the President defending himself against non-existent charges that he’s an anti-Semite. It’s elementary: to combat a problem you first have to define it, and the definition of this particular problem is anti-Semitism, pure and simple. Then you need a robust plan of action. Let’s hope it will be forthcoming — and soon.”

The Simon Wiesenthal Center, which has been supportive of Trump, called on Attorney General Jeff Sessions to establish a task force to track down the perpetrator of bomb threats against Jewish community centers, and said Trump must “outline his Administration’s plan to combat surging anti-Semitism.”

Of the major groups who commented, the Orthodox Union seemed the most inclined to declare “case closed.”

“We appreciate that President Trump spoke directly to this matter. The words of a President of the United States carry great weight and it is important that Mr. Trump addressed the American Jewish community and all our fellow Americans at this time,” the O.U. said in a statement about Trump and the bomb threats. “We appreciate that the FBI and Department of Justice are investigating these incidents and the ‘possible civil rights violations’ they entail. We also appreciate the work of the Department of Homeland Security that supports the safety of our Jewish community institutions.”

The Jewish community has been grappling with how the new president deals with anti-Semitism since Jan. 27, when the White House marked International Holocaust Remembrance Day with a statement that noted “victims, survivors, heroes of the Holocaust,” but did not mention the Jews.

What at first seemed like an oversight soon calcified into suspicion that it was part of a worldview, as White House officials doubled down on the omission, condescending to explain to their critics that one must be inclusive in marking an event that uniquely targeted Jews for elimination.

Officials calling critics of the statement “asinine” and “pathetic” didn’t help, nor did the revelation that a bid by the State Department to mention Jews in a statement was rebuffed by the White House.

Fueling suspicion that there was more to the omissions than clumsy oversight was the presence on Trump’s staff of top advisers like Stephen Bannon, Stephen Miller and Sebastian Gorka, who emerged from a political culture of European-style nationalism that rejects what it terms “identity politics” and argues that minority complaints about discrimination are overstated.

The White House visit last week by Israeli Prime Minister Benjamin Netanyahu presented an opportunity to make amends, and at first it seemed Trump was game.

“The State of Israel is a symbol to the world of resilience in the face of oppression,” Trump said in prepared remarks at a joint Feb. 15 news conference with Netanyahu. “I can think of no other state that’s gone through what they’ve gone — and of survival in the face of genocide. We will never forget what the Jewish people have endured.”

So there it was: “genocide” and “Jewish people” adjacent. All was good.

An Israeli reporter asked Trump about the spike in anti-Semitic incidents in the United States, and whether the president believed it had anything to do with Trump’s rhetoric.

Trump replied by noting the breadth of his Electoral College victory over Hillary Clinton and a statement expressing love for his Jewish daughter, Ivanka; her husband, Jared Kushner, and their grandchildren.

It became weirder the next day at a news conference when a friendly reporter, Jake Turx from the haredi Orthodox Ami magazine, reassured Trump that no one in his community thought the president was an anti-Semite.

Turx proceeded to ask what Trump was planning to do about the waves of bomb threats against Jewish community centers that have severely disrupted Jewish life in North America.

Trump would not allow Turx to complete his question and launched a broadside against the baffled reporter and anyone else who suggested that he was anti-Semitic. Trump called Turx “a liar” and said he hated the question.

What turned Trump and led to his statement Tuesday morning?

His spokesman, Sean Spicer, would not say, except that Trump thought a tour of the African-American museum was an appropriate occasion to expound against hate and discrimination. Trump’s remarks were prepared.

Two precipitating factors may have been the fourth wave of bomb threats on Monday against JCCs, coupled with massive vandalism at a St. Louis-area Jewish cemetery. The White House may have wanted to head off a new round of criticism that it was ignoring anti-Semitism, especially as Jewish groups were heading to Twitter with impatient calls for a strong denunciation from the president.

Another factor may have been Ivanka. Whereas the press office’s initial statement Monday night on the JCC threats again omitted any mention of Jews, Ivanka Trump followed it up with a tweet that at least alluded to Jews, adding to her call for religious tolerance the hashtag “JCC.”

Trump’s erstwhile targets also sensed an opportunity to hit back: Clinton, who infrequently pronounces on issues of the day – and has been oblique when she does pronounce – directly challenged Trump on Twitter to speak out. Muslim groups, targeted by Trump’s rhetoric, raised funds for a reward for the perpetrator of the threat and to repair the toppled headstones at the cemetery.

Calls by Jewish groups for actual plans, and not statements, were not the only sign that Trump’s remarks were unlikely to allay tensions.

Spicer opened his briefing with reporters on Tuesday by repeating Trump’s words, and delivering an impassioned plea for Americans to visit the African-American museum and its National Mall companion, the U.S. Holocaust Memorial Museum. He then turned combative.

(Spicer also responded to the U.S.-based Anne Frank Center for Mutual Respect, which issued a statement mocking Trump’s statement as a “pathetic asterisk of condescension.” He said of the group: “I wish that they had praised the president for his leadership in this area. And I think that hopefully as time continues to go by they recognize his commitment to civil rights, to voting rights, to equality for all Americans.”)

“Why has it taken @realDonaldTrump so long to even say the word ‘anti-Semitism?’” Ellison wondered. “Perhaps it has something to do with placating his base?”

Rep. Joe Crowley, D-N.Y., whose bid earlier this month to force a vote on his resolution emphasizing that the Holocaust targeted the Jews was blocked by Republicans, said Trump needed to be more consistent in his condemnations.

“Trump’s statement is long overdue and doesn’t begin to scratch the surface of what needs to be done,” he said in a statement.