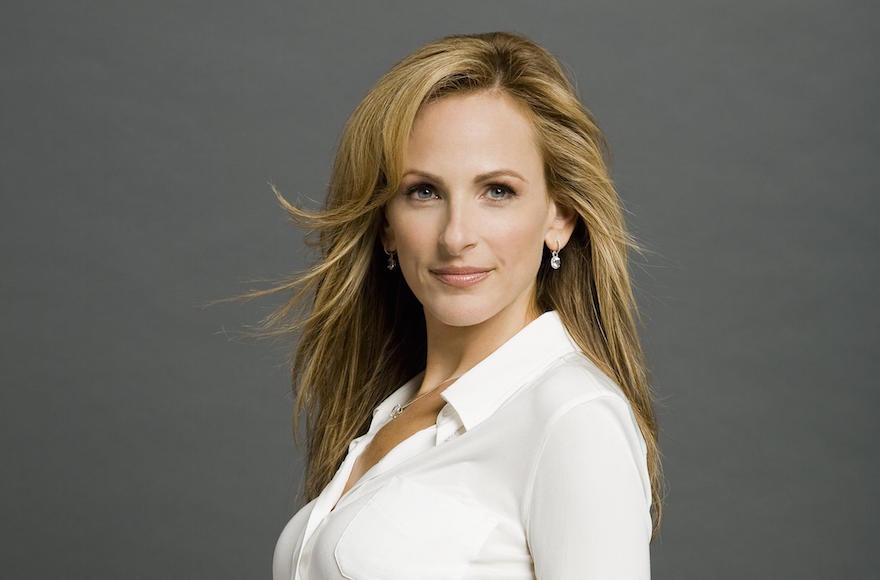 (JTA) — Thirty years ago next month, Marlee Matlin became the only deaf actress or actor to ever win an Academy Award. In 1986, at age 21, she starred in the drama “Children of a Lesser God” as a janitor at a school for the deaf. She took home the Oscar for best actress the following year.

In the decades since, the Jewish actress has combined a busy film and TV career with work on a range of issues, from AIDS to economic inequality. Matlin, 51, was recognized this week with the Ruderman Family Foundation’s annual Morton E. Ruderman Award in Inclusion for her “lifelong activism for people with disabilities.” She has spoken at past conferences and events for the Ruderman Foundation — one of the most active organizations in the Jewish community working to promote disabilities inclusion. The award comes with a $100,000 prize.

He added: “We know that Marlee will continue to be a leading activist who will change reality and help build a more just and inclusive world.”

Matlin found herself in the news last year after reports surfaced claiming that Donald Trump repeatedly called her “retarded” while she was a contestant on his show “The Celebrity Apprentice” in 2011 and 2012. She responded on social media, calling Trump’s alleged statements “abhorrent.”

On the eve of her inclusion award, Matlin in an email interview with JTA spoke about the effects of Trump’s comments, her activism work and her Jewish roots.

JTA: Do you enjoy being a public leader on disability and inclusion issues? Is that a role you actively seek?

Matlin: I like to say that I am an actor whom people recognize and who earns a living as an actor. I also happen to be someone who, by either my example or opinions, has helped to effect a change in the perceptions of people who are deaf or who live life with what people call “disability” (I like to say “diffability,” short for “different ability”) just by being who I am. It’s a role that I did not seek out initially, but I found myself unable to stay silent … because I saw the solutions to inequality as very simple: remove barriers that prevent people like myself [from living] on equal footing with [our] peers. But unfortunately, barriers were not only physical; they were attitudinal. And those barriers are much harder to change. So I speak out and express my opinions!

You’ve been in so many movies and TV shows that it’s hard to count. Do you have a favorite role or acting experience?

It might seem cliche but it is my first film which I hold with my highest regard — “Children of A Lesser God.” I remember each moment in the film and behind the scenes as if they happened yesterday. That’s because it was the biggest turning point in my life — going from suburban teenager to Hollywood film actress in one month — next to having my four children and meeting the man who would become my husband.

Last year, you participated in the first-ever roundtable discussion on disability inclusion in Hollywood — an industry in which around 95 percent of television characters with a disability are played by able-bodied actors. Did that event make a splash, and to your knowledge has there been any progress in Hollywood on this issue?

I hope that this time Hollywood is finally and no longer “deaf” to the fact that in all the discussions of diversity and inclusion, people who are Deaf and people with disabilities can be included in the discussion. The Ruderman Foundation I believe has made that change. But just as people said that 30 years ago when I broke through with my Academy Award for “Children of a Lesser God” — that the entertainment business would be more accepting of actors and [would create] more characters who were deaf and disabled since the fact is that 20 percent of the population has a disability — TV and film do not reflect that. So what I’ve said at the beginning of my career still rings true today: Many may think just because I’m deaf, I live in a world of silence. But as long as there is inequality, silence is the last thing the world will ever hear from me. Thank goodness there is the Ruderman Foundation to help make noise.

What are some of the difficulties you face as a deaf actress— in terms of broader acceptance in modern culture — and have things become easier for you since you launched your career in the ’80s?

Difficulty is just part of being an actor in Hollywood; it’s hard to keep up even when one is not deaf. But thank goodness that technology, social media and changing attitudes have made it somewhat easier for me … And yet, I still see deaf actors who aren’t deaf playing roles that are deaf … So I continue to do what I do, every day — put on my best face, do my best in every role that I undertake to prove what a Deaf person can do.

President Trump has been involved in multiple scandals involving people with disabilities. Besides mocking you while you were a contestant on his show, he was also accused of mocking New York Times reporter Serge Kovaleski last year. Do you feel like the current attitude in the U.S. toward people with disabilities has been affected by these developments in a good or bad way? Are we at a particularly high or low point right now when it comes to fostering inclusion?

Admittedly, we are not at 100 percent inclusion, particularly when it comes to the entertainment business, but there has not been one instance that I have seen or read about where people have thought any less … [of] Americans with disabilities as a result of President Trump’s unacceptable comments. In fact, the comments by him and the fact that some are still slow to recognize that inequality still exists have emboldened and ignited a newfound fervor in the drive towards equality. As Natalie Portman so aptly stated at the recent Women’s Rally in Los Angeles, “Thank you for igniting the revolution.” I take that to mean for ALL people who face challenges of one sort or another, including those of us whom society labels as disabled.

A little over a year ago you told JTA that you loved your experience in a synagogue in a Chicago suburb growing up. Are you involved in any Jewish community these days?

I have brought Judaism into my home and married it nicely with my husband and his family who are Catholics. We are equal opportunity when it comes to holidays and traditions.

Unfortunately, where I live there is not a temple with a signing rabbi, and though I’m sure I could go to a local temple with an interpreter, I prefer to take the lessons I learned, the richness of Judaism and the culture that my parents passed along to me, and share it with my family, making the best home that I know how to. By the way, I’m finally fulfilling a lifelong dream, one I’ve had ever since I was bat mitzvahed — I am traveling to Israel this summer for the first time on behalf of the Ruderman Foundation. While I’m there, I plan to look up my family and take in all the Holy Land sites. I can’t wait!