Tel Aviv and Jerusalem marathons revel in a ‘healthy competition’ 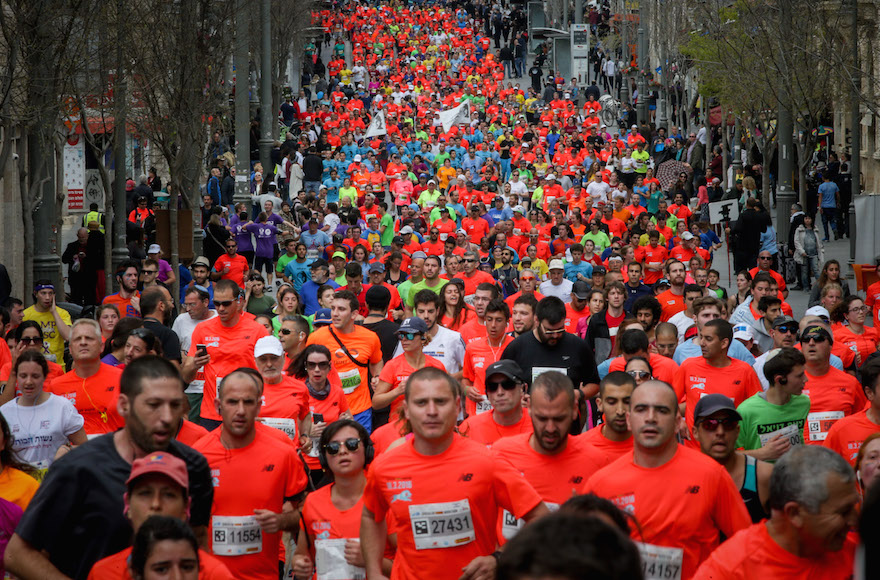 TEL AVIV (JTA) – Noah Roth likes to recall two moments  from Israeli marathons in which he’s raced: a competitor in Jerusalem breezing by him in 2010 wearing all-black, haredi Orthodox garb but for a white athletic shirt; and a Russian woman on this city’s Allenby Street who last year handed sprinters cups of clear-liquid refreshment – not water, but vodka.

“I’m neither a Tel Avivian nor a Jerusalemite. I like both cities, and I like both marathons,” said Roth, a corporate recruiter who lives in Beit Shemesh, about midway between the two. “Jerusalem has more of a family feeling. Tel Aviv is more like, ‘I’m out here for the event.’”

While hardly on par with the New York, Boston and London marathons that draw world-class runners, the Jerusalem and Tel Aviv races are huge for Israel, attracting growing numbers of competitors and providing welcome jolts to the economy.

This is marathon-event season in Israel, with Tel Aviv preparing to stage its race on Friday and Jerusalem following three weeks later. The Tiberias Marathon, Israel’s oldest, was held on Jan. 8.

They are scheduled so near each other because of the weather, competitors and organizers said. The window for safe and hospitable racing is a narrow one in the winter before the long, hot summers.

The especially tight period between the Tel Aviv and Jerusalem events also reflects some of the rivalry between the cities. Organizing officials say they feel welcome at each other’s events, but don’t jointly market them here or abroad, nor do they approach potential sponsors together.

Not so healthy, though, to Yossi Melman, a Tel Aviv-based journalist who has run 35 marathons, including a dozen in Israel.

Some actually do after modifying their training.

Roth completed the trifecta in 2016 and is trying again this year. He runs Tiberias, the fastest course of the three, aiming for a personal best, and Tel Aviv as a fairly reasonable reprise a mere month and a half later. Roth competes in Jerusalem just because it’s Jerusalem. In the latter two, he obsesses far less over his split times and sometimes doesn’t even wear his running watch.

“Tel Aviv and Jerusalem are like dessert. I can take my feet off the gas and have fun,” he said. 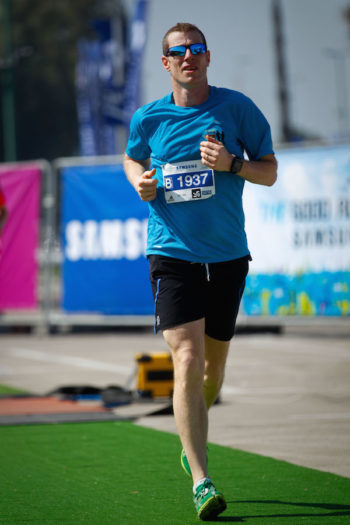 Each city’s signature sporting event has unique allures and drawbacks.

Jerusalem Marathon partisans speak of being uplifted by the route’s brief sojourn in the Old City and the magnificent views of it from other neighborhoods – several interviewees used the term “running through history” – and by large crowds of cheering spectators. They also talk of the brutality of the city’s extremely hilly terrain.

Those favoring the Tel Aviv Marathon cite the city’s seaside beauty and the energy drawn from racing through Israel’s commercial capital, but also the sometimes-challenging heat. (The city permanently shifted its marathon from springtime to February in 2013, but even then a man competing in the half-marathon that year died of apparent heat-related causes. In 2015, the event was canceled midway through due to extreme heat.)

And Tiberias? It draws sneers for an uninspired course – dipping counterclockwise around the southern tip of the Sea of Galilee, then boomeranging back – and the near absence of spectators, but praise for being consistently flat, enabling runners to post their best times in any of the country’s three marathons.

The best runners stand to profit in the coming weeks. Tel Aviv is offering $15,000 to the first marathoner to break the course record and $40,000 for finishing in 2:08 or faster. Jerusalem’s various prizes include $1,500 to a marathoner setting a course record.

Some 40,000 runners are expected to compete in the Tel Aviv Marathon and its related half-marathon, 10K, 5K and charity walks; 25,000 have registered for Jerusalem’s various event categories.

Ilanit Melchior, tourism director of the nonprofit Jerusalem Development Authority, a sponsor of the capital’s race, projected that city hotels, restaurants and shops will earn $7.5 million just from the 3,000 foreign runners (600 of them marathoners) from 50 countries who have registered as of Wednesday, not counting money spent by their travel companions. Ofer Shytrit, whose company produces the Tel Aviv Marathon, offered a “minimal estimate” of $5 million that runners will spend in town for his event.

“If you have one startup, it’s a startup. If you have two or three, it’s a market,” said Barkat, who made his fortune in high-tech.

The popularity of the Tel Aviv and Jerusalem marathons, he said, “creates a dramatic improvement in the market.”