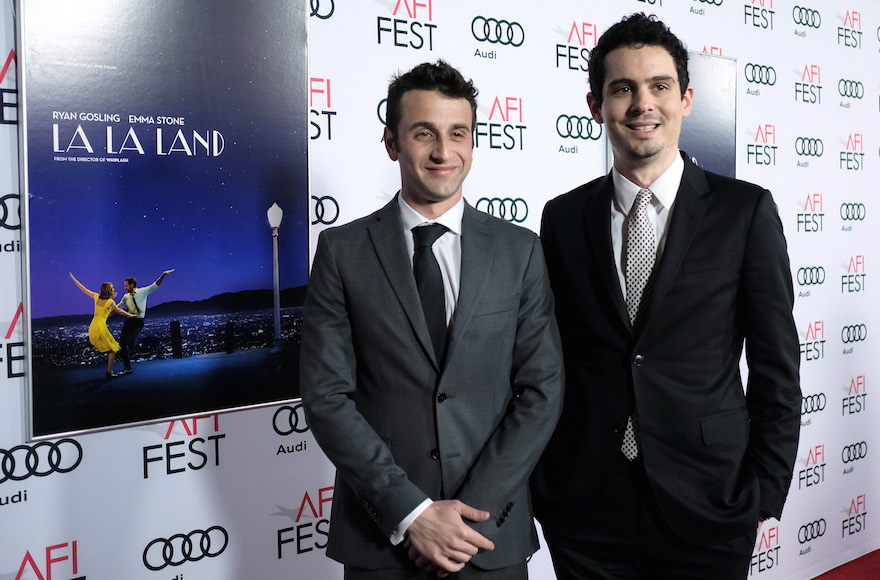 (JTA) — The Academy of Motion Picture Arts and Sciences is happy to forget 2016, when it was widely eviscerated for nominating only white artists in the major award categories for the second straight year.

But things are looking up for this year’s Academy Awards, which are set to air Sunday night, as they feature a more diverse set of nominated actors and a stronger slate of nominated films.

While the overall Oscars climate is merrier this year — not counting liberal Hollywood’s malaise over the election of Donald Trump — there are fewer than usual overtly Jewish storylines underpinning the ceremony. So we did some digging and picked out some of the unexpected Jewish tidbits from among the nominees.

The “La La Land” director is Catholic, but he went to Hebrew school.

Damien Chazelle is not yet a household name — but he might be closer to becoming one after Sunday, since his film “La La Land” is nominated for a record-tying 14 Oscars. Chazelle, 32, who broke out with his 2014 film “Whiplash,” grew up in a Catholic household in Princeton, New Jersey. However, when his parents became dissatisfied with his religious education at a church Sunday school, they enrolled him in a Hebrew school class. He attended for four years.

“I had that period of my life where I was very, very into Hebrew and the Old Testament, and then I went with my class to Israel when we were in the sixth grade,” Chazelle told the Jewish Journal of Los Angeles in 2015. “I don’t think they even knew I wasn’t Jewish; I was, like, ‘passing.’”

There are finally some Jewish characters in the “Harry Potter” universe.

J.K. Rowling’s books about the young wizard enchanted readers around the world for years, so it was folly to think the series would ever end completely. The first of five new Potter “universe” films based on Rowling’s 2001 book “Fantastic Beasts and Where to Find Them” came out last fall. The entertaining flick is nominated for two awards, in the costume design and production design categories — and also features two Jewish characters, a first for a Potter universe story. Dan Fogler stars as Jacob Kowalski, a Lower East Sider trying to open his own bakery, and Katherine Waterston plays Tina Goldstein, an employee at the Magical Congress of the U.S. The story also works as an allegory about anti-Semitism in the 1920s.

A film about a Holocaust survivor’s violin could win for best documentary (short subject).

When Joe Feingold, a 93-year-old Holocaust survivor from Poland living in New York, stopped playing his violin a few years ago, he donated it to a campaign that gives instruments to needy students. It ended up in the hands of Brianna Perez, a 12-year-old student at the Bronx Learning Global Institute for Girls. But this was no ordinary violin — Feingold bought it at a displaced persons camp just after the war, and it helped him get back to the music he enjoyed before the Holocaust.

Kahane Cooperman’s 24-minute documentary on the violin’s story and a meeting of Feingold and Perez is, as a JTA writer accurately called it, a “five-handkerchief weeper” — and it has a chance of winning the award.

Natalie Portman put on an accent (non-Israeli) to earn a nomination for “Jackie.”

In the biopic about Jacqueline Kennedy Onassis in the aftermath of her husband’s assassination, the Israel-born Portman sounds unrecognizable. That’s because she studied extensively how to sound like the former first lady, whose famously eccentric version of an old New York accent has been described as “a peculiar drawl that defies simple linguistic classification.”

But Jackie O’s voice wasn’t the first accent Portman has had to perfect — in fact, she toiled in 2015 to improve her Israeli accent for “A Tale of Love and Darkness,” her directorial debut and an adaptation of Amos Oz’s autobiographical novel. Portman plays Oz’s mother in the film, which has dialogue entirely in Hebrew.

A Jewish composer is headed for a big night.

Justin Hurwitz, who was Damien Chazelle’s Jewish roommate at Harvard, is ready to make a name for himself as well. His soundtrack for “La La Land,” written with lyricists Benj Pasek (who is also Jewish) and Justin Paul, is a lock to win the best film score award. The song “City of Stars” is also likely to win in the best individual song category. Hurwitz and Chazelle have had a fruitful relationship: The Jewish composer has worked on music for all of Chazelle’s previous films, including the acclaimed “Whiplash.”

The Irish-sounding director of “Manchester By the Sea” is also Jewish.

Kenneth Lonergan certainly sounds like an Irish Catholic name — and the writer’s father was indeed Irish. But his mother was Jewish, making him a default member of the tribe. Lonergan, who has also written several plays and the film “Gangs of New York,” was raised in a pretty secular environment by his mother and a Jewish stepfather near Central Park in New York City.

“I always assumed everyone was Jewish,” he told the New Yorker last year about his upbringing. “I didn’t know it was unusual in any way. And then I finally met some people who weren’t Jewish and I was, like, ‘Oh, not everyone is Jewish — OK.’ But that took a while to sink in.”

A nominated documentary focuses on a Jewish family with an autistic child.

Noted Jewish journalist Ron Suskind’s son Owen began showing signs of autism at age 3, when he stopped speaking and communicating the way he had before. But Suskind found an unlikely source to help coax Owen out of his frustration and silence: animated Disney movies. Owen immersed himself in the films and began communicating by repeating phrases from them. Roger Ross Williams’ touching film, which follows Owen through a crucial year in his 20s as he looks to become more independent, is nominated for best documentary. Since form often follows content, the movie includes several animated sequences.