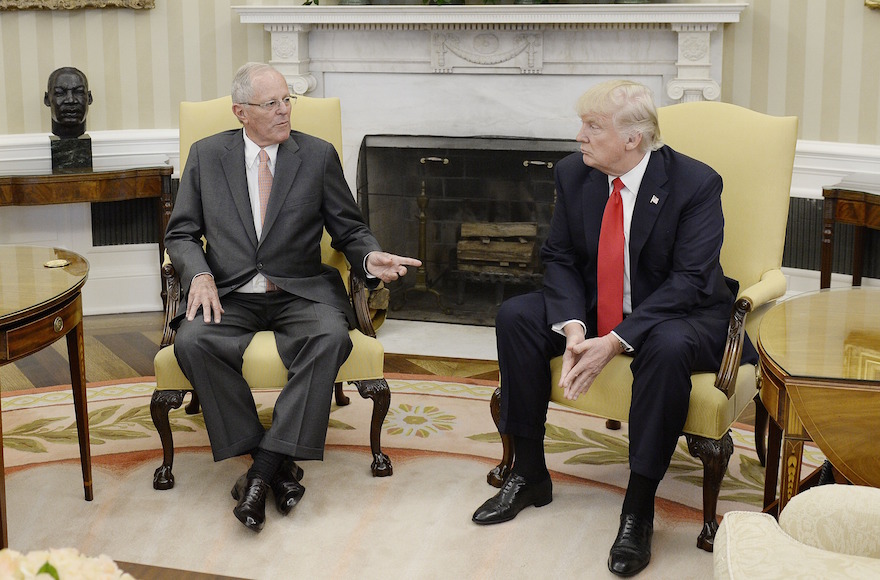 RIO DE JANEIRO (JTA) — The president of Peru, whose father was a Jewish refugee who fled the Nazis, told U.S. President Donald Trump during a visit at the White House that he prefers “bridges to walls.”

Peruvian President Pedro Pablo Kuczynski, born in Lima to a French Protestant mother and German Jewish father who fled the Nazis in 1933, gave Trump a gentle rebuke of his controversial proposal to build a wall along the border with Mexico, reported the Washington Post.

The U.S.-educated former Wall Street banker, who renounced his American citizenship to run for Peru’s presidency last June, took a strong stand against Trump’s “America First” agenda while many in the region remain silent.

Kuczynski, 78, told Trump he was interested in the free movement of people — “legally,” he emphasized — and also spoke about trade and economic development, reported the Post.

Kuczynski harshly criticized Trump during the U.S. presidential campaign, joking he would cut diplomatic relations with the U.S. “with a saw” if Trump followed through on his pledge to build a wall with Mexico, which he compared to the Berlin Wall. On Friday, he made a point of saying “we prefer bridges to walls.”

Peru’s former president, Alan Garcia, once slammed Kuczynski for not having “a single gram of Peruvian blood. He has Polish, Jewish, French, but Peruvian zero”. A former Peruvian ambassador to Washington declared: “Can I have confidence in this guy? He’s old, his parents were European, his wife’s American, his kids live in the States.”