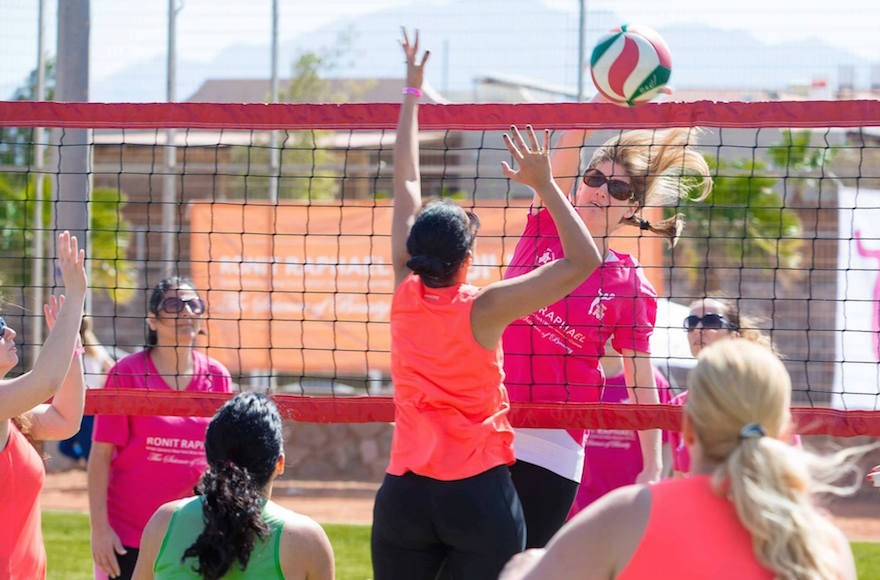 A match at the Israeli catchball tournament in Kfar Saba, Feb. 21, 2017. (Courtesy of the Israel Catchball Association)
Advertisement

TEL AVIV (JTA) – Every week, thousands of women across Israel gather to play a sport almost no one outside the country has heard of.

For that matter, few Israelis knew about catchball – or “cadur-reshet” in Hebrew — a decade ago. But in recent years it has become the most popular competitive sport among adult women in the country, with nearly all the players over 30 years old.

Now the Israel Catchball Association is trying to spread the feminist fever to women around the world. A major step will be catchball’s appearance for the first time at the Maccabiah Games in Israel this summer. The hope is that the thousands of Jews who attend the multi-sport games from around the world will be inspired to ask: What is catchball?

Catchball is like volleyball, but easier because catching and throwing replaces bumping, setting and spiking. Israelis adapted the sport from Newcomb ball, which was named for the Louisiana women’s college where it was invented over a century ago. Today, Americans rarely play Newcomb ball outside of gym class.

Meanwhile, catchball leagues in Israel boast more than 12,000 female members. That is twice as many adult women as belong to basketball, soccer, volleyball and tennis leagues combined, according to data from Israel’s Culture and Sport Ministry.

Hila Yeshayahu, 41, plays for the Herzliya-based squad Good Heart and handles marketing and business development for the Catchball Association, to which the team belongs. She said women start playing catchball because it is fun and easy — and stick with it for the sense of community and personal empowerment.

“Catchball is a present women give themselves. It’s a chance to do something healthy with other women and come back home with more strength and more passion,” she said. “When I step out the door in my uniform, my kids aren’t on my shoulder; my husband isn’t on my shoulder. I’m 18 years old again. I’m Hila, and I can do anything.”

Yeshayahu’s twin sister also competes for a team in the association, and their 11-year-old daughters play together in a new girls’ league.

On a Tuesday evening, Yeshayahu and her team faced off against A.S. Moment at a high school gym in Ramat Hasharon, not far from Herzliya in central Israel. The crowd consisted of a few husbands and sons on the sideline. But the atmosphere was competitive, with a referee, scorekeepers and players wearing numbered uniforms. When A.S. Moment won two sets to none, Good Heart players slumped onto the court, and several tearfully threw their knee pads toward the bench. (The first two sets are scored up to 25 points, while a third set in the best-of-3 match would go to 15. The victor must win a set by at least two points.)

Good Heart coach Liron Shachnai, 34, a marketing and sales manager by day, said most of her players have little experience losing. Competitive sports in Israel are male-dominated, she said, so women do not have the opportunity to learn sportsmanship growing up.

“You have women who are over 40 going home crying, saying [the opposing players] think they’re better than us,” she said.

Still, by the next practice Thursday evening, the players were looking toward the future. It helped that this weekend, they will compete in the Catchball Games in the southern resort town of Eilat. The tournament is catchball’s biggest event and a highlight of the year for many players.

“You should see all the photos they’re posting on Facebook. They can barely wait,” Yeshayahu said.

In its sixth year, the Catchball Games are expected to draw more than 1,500 women from all of Israel’s leagues, and even a few teams from abroad. Leaving their husbands and children at home, women will don pink Israel Catchball Association T-shirts for four days of competition and socializing. Local schools will host hundreds of matches, and the top two teams will face off for the championship. Off-court festivities will include a parade, Eilat’s first night road race and a standup comedy show. 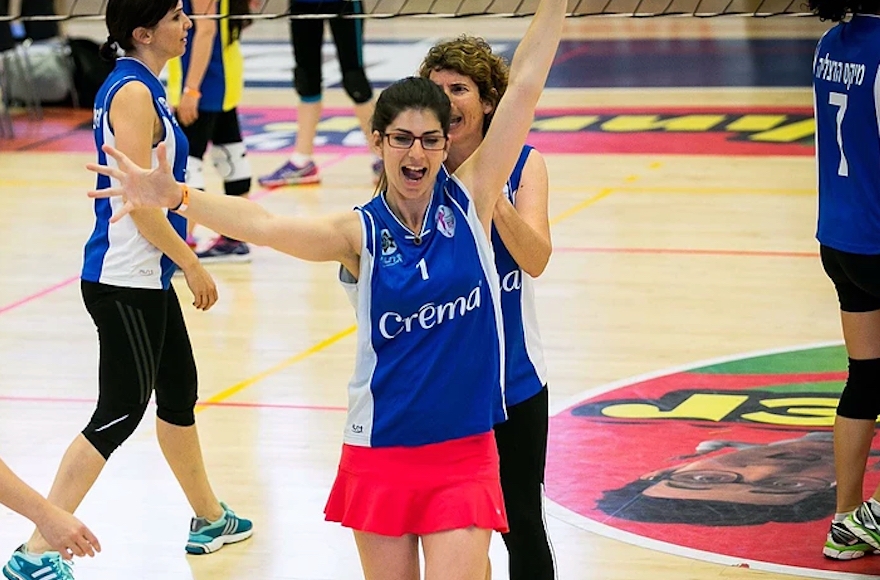 A player celebrating at the Catchball Games in Eilat, Israel, February 2016. (Courtesy of the Israel Catchball Association)

Alexandra Kalev, a sociology professor at Tel Aviv University, says the success of catchball in Israel can be seen as a challenge to the roles women have traditionally played in the country’s sport and culture. Women’s sports in Israel are underfunded and little covered in the media, and women are expected to work and handle most household responsibilities.

“Catchball can empower women, especially at a stage in life when they are weakened,” Kalev said. “They are discriminated against in the labor market, overwhelmed by home chores and child rearing and experiencing the changes that age brings on all of us. These leagues really come at the right time of their lives and allow them to be empowered. The message is: We are strong.”

The rise of catchball in Israel began in 2005, when Ofra Ambramovich started Mamanet, a league for mothers in the central city of Kfar Saba, where she lives. She learned the sport from Haim Borovski, an Israeli gym teacher from Argentina. Thanks to Ambramovich’s entrepreneurship, dozens of municipalities have since started their own Mamanet leagues. In her mind, catchball is primarily a mom-powered social movement.

“Catchball gives mothers something for themselves, a reason to be healthy and part of the community,” Ambramovich said. “And the mother is the agent of the family, so she’s the perfect role model. When the mother does well, everyone benefits.”

In 2009, the Israel Catchball Association branched off from Mamanet in an effort to make the sport more competitive. The association welcomed non-mothers and allowed women to form their own teams rather than requiring them to participate through their children’s schools — though they maintained Mamanet’s age minimum of 30. Today, the association offers leagues at four skill levels.

The Israel Catchball Association claims 5,000 players, and Mamanet claims 12,500. Both groups claim superiority and dispute each other’s numbers, but everyone agrees the total number of women playing is more than 12,000.

It is also clear the sport is growing rapidly, and even reaching into Israel’s most traditional communities. Many Orthodox Jewish women play catchball in headscarves and skirts. And there is a mostly Druze team in Daliyan al-Carmel in northern Israel. When Anaia Halabi, a 35-year-old school counselor, started the team seven years ago, it was a radical idea.

“For women to leave their husbands and their children to play was a big change for the village,” she said. “It is not considered suitable for women to be outside the home at night. Not all the husbands approve.”

But over time, Halabi said, the husbands have grown more accepting, and the local municipality began paying for a van to transport the team to games outside the village. At the same time, the team has arranged not to play late night games, and a three-club local league has been formed to allow women to compete without leaving the village.

With the sport firmly established in Israel, the Israel Catchball Association has started looking overseas. Part of the motivation is that to qualify as an official sport and receive funding from the Israeli government, catchball must be played competitively in at least 52 countries. So far, the only leagues the association knows of outside Israel are in Mexico and the United States. But they are encouraging the sport in more than half a dozen other countries, mostly through Israeli expats.

Gal Reshef, a 35-year-old Israeli lawyer, founded a catchball group in Boston in 2015 and last year expanded it into the U.S.A. Catchball Association in partnership with the Israel Catchball Association. She said the vast majority of the nearly 100 women in the Bostonet Catchball Association, as well as in the handful of other teams across the country, are Israelis. But Reshef is confident catchball will, um, catch on with American women, too.

“I think in the States, the situation is the same as in Israel. If you’re a middle-aged woman who didn’t have the chance to play sports growing up, there are very few options,” she said. “The great thing is anyone can play catchball, and it creates an amazing uplifting community.”

At least one Bostonet team is slated to participate in the catchball exhibition tournament at the Maccabiah Games in July. Thirty-six Israeli teams will be there, along with a couple from London and Berlin. Reshef predicted that by the time the next games roll around in four years, teams from around the world will be playing catchball in the real tournament — and after that, maybe the Olympics.