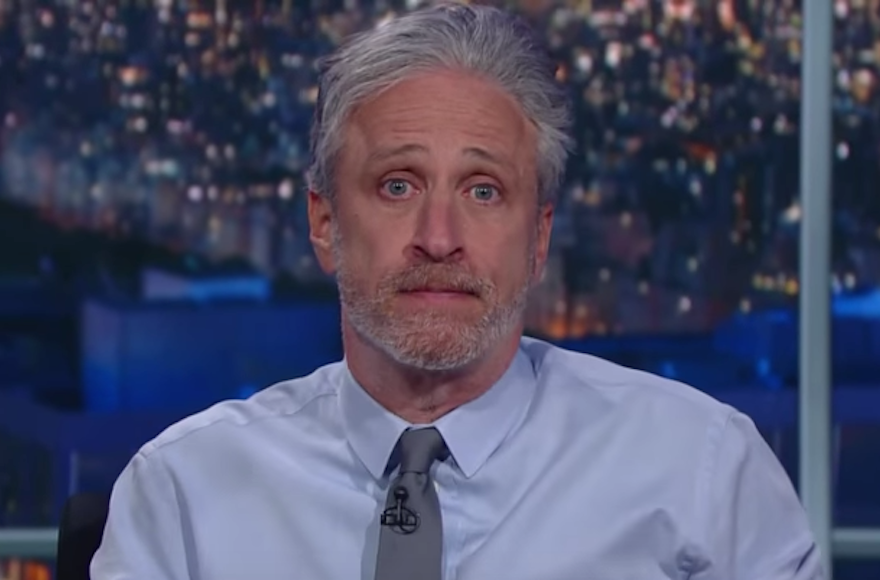 (JTA) — Jon Stewart isn’t so sure that Donald Trump loves the Jews.

Visiting Stephen Colbert’s “Late Show” Monday from his “farm,” the former “Daily Show” host launched into one of his signature monologues, slamming the president for his repeated falsehoods. Stewart called Trump out for lying about the murder rate and the size of his electoral college victory.

But Stewart’s “favorite” Trump falsehood came when the president shut down a Jewish reporter’s question about anti-Semitism. At a press conference earlier this month, Ami magazine’s Jake Turx asked Trump a question about a perceived rise in anti-Semitic acts, whereupon Trump interrupted him, accused him of lying and told him to sit down.

Trump then said, “I am the least anti-Semitic person that you’ve ever seen in your entire life.”

Stewart’s response? “I don’t think that’s true,” he said in  an old-world Yiddish accent, after staring uneasily at the camera and scratching his neck.

“He said that to a guy wearing a yarmulke,” Stewart continued. “Donald, you’re not even the least anti-Semitic person in the clip we showed.”

Stewart then pivoted to the news media and proceeded to coach them on how to survive their painful “breakup” with President Trump.

“So I heard Donald Trump broke up with you,” he said. “Stings a little, doesn’t it? Finally thought you’d met your match: a blabbermouth who’s as thin-skinned and narcissistic as you are. Well now it’s over. Well good riddance, I say! Kick him to the curb! Media, it is time to get your groove back.”