Trump notes anti-Semitic threats and vandalism in speech to Congress 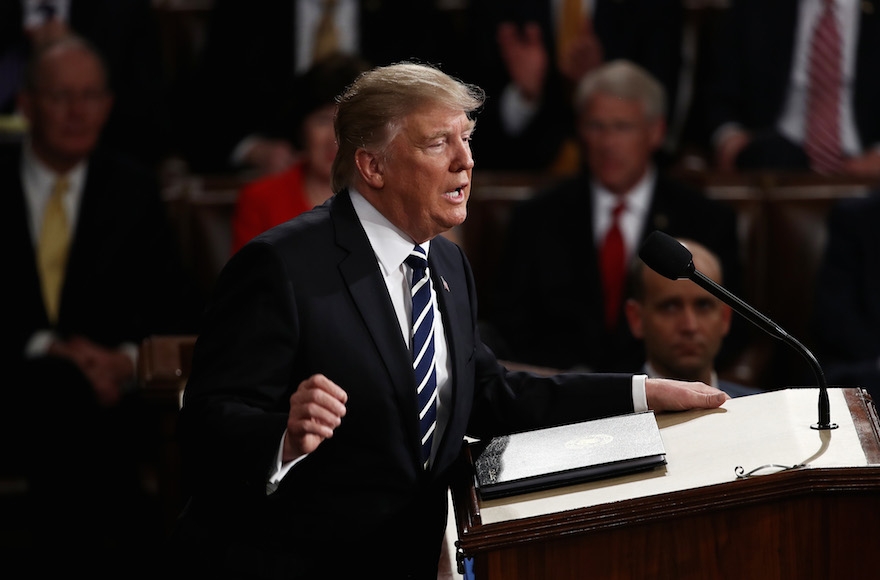 WASHINGTON (JTA) — President Donald Trump noted recent bomb threats on Jewish institutions and vandalism of cemeteries in his first address to a joint meeting of Congress.

“Tonight, as we mark the conclusion of our celebration of Black History Month, we are reminded of our nation’s path toward civil rights and the work that still remains,” Trump said at the opening of his speech Tuesday night. “Recent threats targeting Jewish community centers and vandalism of Jewish cemeteries, as well as last week’s shooting in Kansas City, remind us that while we may be a nation divided on policies, we are a country that stands united in condemning hate and evil in all its forms.”

Nearly 100 Jewish institutions have been targeted with bomb threats since the beginning of the year. A patron ejected from a Kansas bar last week after hurling racial epithets at two workers from India allegedly returned with a gun and killed one of the men and wounded another, as well as a man who tried to stop the attacker.

Trump has come under fire for delayed responses to the cases. Concerning the threats on Jewish establishments, Trump at first deflected questions – and in one instance shouted abuse at a reporter – before calling them “horrible” last week. The White House did not address the Kansas shooting until Tuesday, six days after the attack.

Jewish leaders who had criticized the president for his fumbled responses praised the inclusion of the reference in his speech.

“Powerful for @POTUS to note anti-Semitism at top of speech,” Rabbi Rick Jacobs, the president of the Union for Reform Judaism, said on Twitter. “Key now is to investigate and end terror campaign.”

Powerful for @POTUS to note anti-Semitism at top of speech. Key now is to investigate and end terror campaign.

“Thanks @POTUS for condemning #hate against Jews & immigrants,” Greenblatt said. “Now let’s fight it. See our plan. Let’s do it together.”

Thanks @POTUS for condemning #hate ag Jews & immigrants. Now let's fight it. See our plan. Let's do it together. https://t.co/4olwW2fFP5

Much of Trump’s speech was focused on his plans to restrict current immigration practices, impose law and order, repeal the Affordable Care Act, the Obama administration’s signature law, and reform trade agreements with other countries. Unusually, he repeatedly excoriated his predecessors’ policies.

“Overseas, we have inherited a series of tragic foreign policy disasters,” Trump said.

The president also alluded to his efforts to improve ties with Israel, which were beset by tensions between President Barack Obama and Prime Minister Benjamin Netanyahu. Trump noted that like Obama, he imposed sanctions on Iran after it tested a ballistic missile.

“I have also imposed new sanctions on entities and individuals who support Iran’s ballistic missile program, and reaffirmed our unbreakable alliance with the State of Israel,” he said.

Democrats sat silent through much of the speech, refraining from applause and making thumbs down movements when they disagreed. All the women in the Democratic caucus in the U.S. House of Representatives wore white, an initiative of Rep. Lois Frankel, D-Fla., who is Jewish.

Frankel told People magazine that the white hearkened back to the suffragettes and was meant to protest Trump rollbacks of reproductive rights and other protections for women.

Seated next to one another were Rep. Debbie Wasserman Schultz, D-Fla., the Jewish congresswoman who until last summer was the chairwoman of the Democratic National Committee, and Rep. Keith Ellison, D-Minn., who last week lost his bid to replace her, but who secured the spot as deputy party chairman. Ellison is the first Muslim elected to Congress.

Their sitting together was a sign of Democratic unity after internal rivalries helped drive the party apart last year and contributed to its defeat of Hillary Clinton in the presidential election and in both chambers of Congress: Wasserman Schultz was identified with the Clinton camp, while Ellison was close to Clinton’s primaries rival, Sen. Bernie Sanders, I-Vt.

Additionally, Wasserman Schultz is among the Democrats closest to the pro-Israel lobby, while Ellison came under fire during his DNC run for his critical postures on Israel policy and his association decades ago with the anti-Semitic Nation of Islam movement.