Meet the Jewish artist behind the haunting Purim puppets of Paris 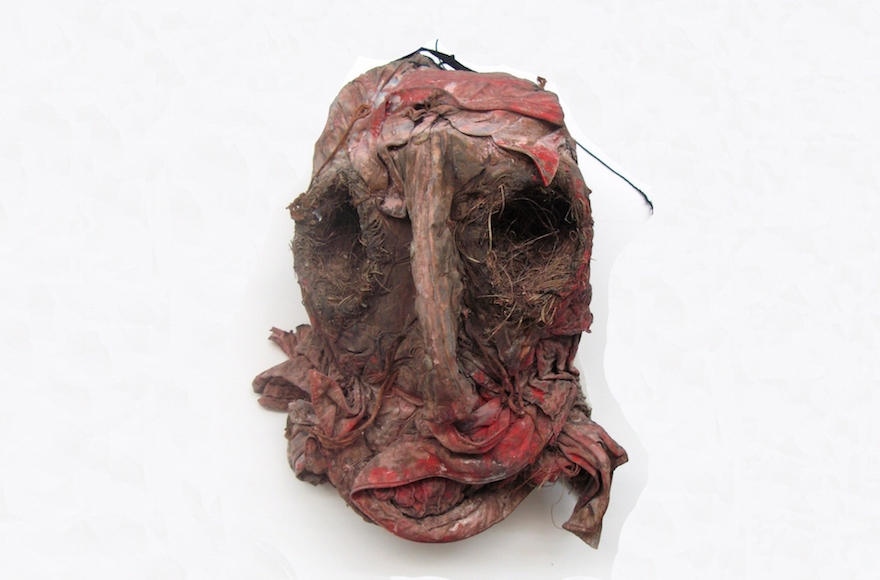 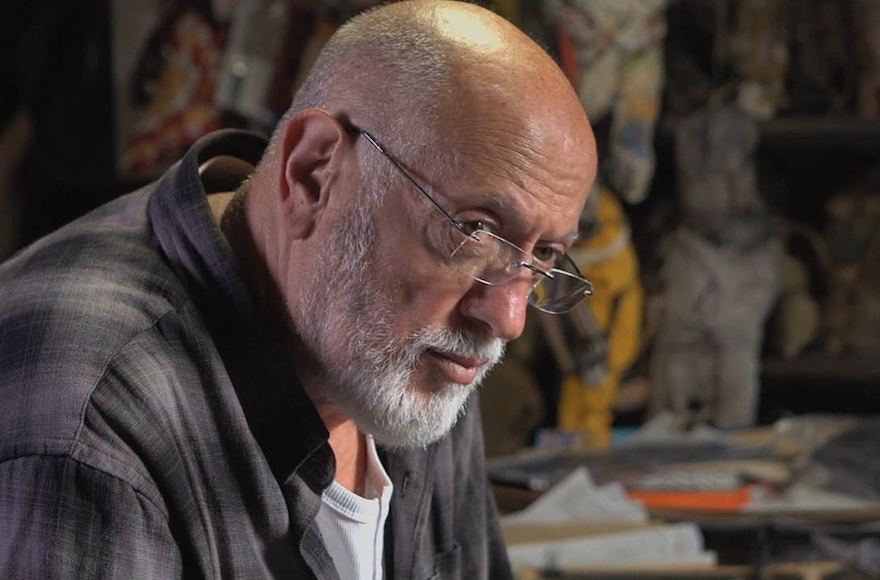 Michel Nedjar at his studio in Paris in 2016. (Isabelle Filleul de Brohy)

(JTA) — Though he may be one of France’s best-known puppet makers, Michel Nedjar insists he does not really create the acclaimed and haunting figures that he calls his “Purim puppets.”

A former tailor’s apprentice whose life’s work last week went on display at the prestigious Metropolitan Museum of Lille, Nedjar says he merely “exhumes” his puppets to reconnect to his brethren who were murdered in the Holocaust, to his lover and mentor who died of AIDS — and to his Jewish roots.

The talk of exhumation is no cryptic metaphor by Nedjar, whose 2005 exhibition titled “Purim Puppets” was featured for years at the Paris Museum of Jewish Arts and History.

He literally buries some of his puppets in the ground for long periods of time before digging up their decomposed remains. The process is a communion with many of his relatives shot dead by the Nazis and dumped into mass graves in his ancestral Poland.

“The Holocaust is something I carry within myself wherever I go, since I first learned of those graves” as a boy, Nedjar, 69, said in a 2016 documentary about his life titled “The Forbidden Areas of Michel Nedjar.”

He doesn’t bury all his puppets. Some live up to the title of his collection referencing Purim — the holiday of costumes and buffoonery, when Jews are encouraged to drink alcohol and rejoice. They include the colorful and sophisticated piñata-like objects that he was inspired to create while touring Central America, Southern Asia and beyond in the 1970s.

But the exhumed ones, with their hollowed-out, gaping eye sockets, earth-filled mouths and rotting beards, are the stuff of nightmares. And they are the reason that institutions like the Lille Metropolitan, which the Le Figaro daily has ranked among the seven best French museums outside Paris, are lining up to display the work of a tailor’s apprentice with no formal education.

Nedjar’s Sephardic father – an affluent tailor and textile merchant — and his Ashkenazi mother sought, like many parents of their generation, to insulate him from the horror that ended just two years before his birth, when a quarter of French Jews were exterminated along with much of European Jewry.

“Our parents did not want to talk to us about any of it,” Nedjar says in the documentary, referring to his sister. “I remember them always laughing and smiling.”

His only concern as a child, Nedjar recalls, was hiding from his parents that he liked to play with his sister’s dolls — a preference he says was an early manifestation of his sexual orientation. So he would bury the forbidden playthings in his backyard.

Growing up privileged and happy, nothing prepared Nedjar for the 1956 documentary film “Night and Fog,” which shocked the world by showing, for one of the first times in wide distribution, graphic  footage from the concentration camps.

“It devastated me,” Nedjar said. “I was one with the victims. There was a shot of a grave, and I entered that grave and I felt all those bodies around me.”

Nedjar said he realized for the first time that had he been born just two years earlier, he also “would’ve been killed for being a Jew.”

It was after watching the film at the age of 9 that Nedjar said he exhumed his doll for the first time as a therapeutic exercise.

“Exhuming that puppet was to exhume all those dead that were inside me now. It was too heavy, too painful,” he said. “You can call it therapy, you can call it an attempt to reach the surface and breathe. That puppet saved me.”

In a way, that puppet also made Nedjar a well-known artist in France. After displaying his buried Purim puppets — he chose the name because it signified Judaism’s ability to rejoice even when faced with the threat of extinction — he was able to present and sell his work at prestigious art galleries.

But it would take decades for Nedjar to transform that childhood experience into the inspiration behind his trademark technique.

A poor student who flunked high school, Nedjar was put to work at his father’s atelier, where he completed a tailor’s apprentice training. Then he started selling clothes and textiles with his maternal grandmother, who taught him Yiddish, at the main flea market in Paris. Back then, it was a heavily Jewish institution, with many Ashkenazi merchants.

Nedjar says it was good for his development as an artist.

“There was always schmattes lying around the house and at the market,” he recalled, using the Yiddish word for rags. “I started working with it, sewing crazy clothes and designs from old curtains — which the hippies during the 1970s absolutely adored, so I was able to save money and travel the world.”

In Mexico, Nedjar lived with the filmmaker Teo Hernández, who would become Nedjar’s great love and artistic mentor.

“Teo taught me to make love and make films,” he said in the documentary.

Upon leaving Mexico, Nedjar sank into an acute depression that worsened as many of his friends contracted the HIV virus that causes AIDS – the disease that in 1992 claimed Hernández’s life.

Bereaved, depressed and considering psychiatric treatment, Nedjar’s mind circled back to the puppets he buried and exhumed as a child decades earlier to deal with his grief over the Holocaust.

“I told myself I needed to rescue myself with the puppets,” he said. “I don’t know why but I had this intuition.”