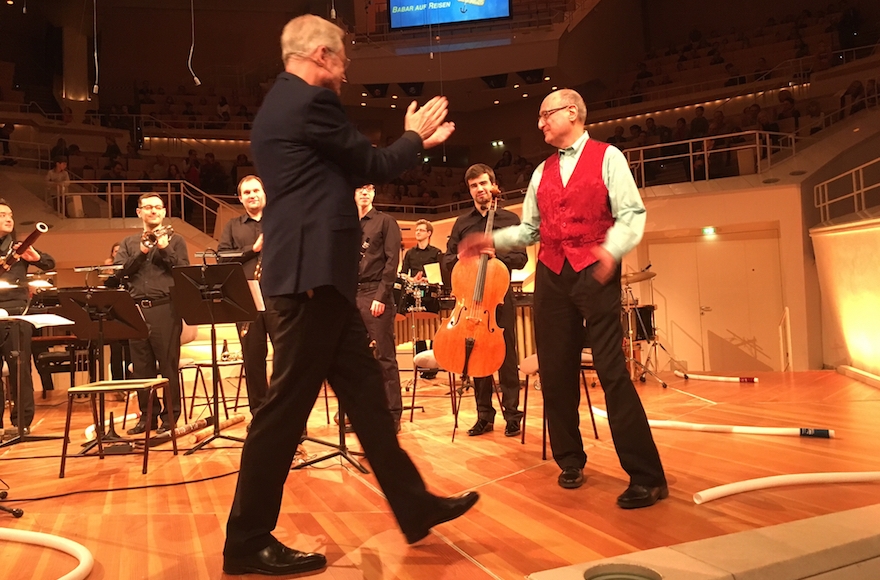 BERLIN (JTA) — A concert work for families by New York-based composer Raphael Mostel saw its European premiere in Berlin, in a performance by the Academy of the Berliner Philharmoniker.

Called “The Travels of Babar” — and based on the classic 1932 picture book by Jean de Brunhoff — Mostel’s chamber orchestral work combines music, images and text as a means to introduce young audiences to classical music and instruments. The first performance of the full score live on stage was in 2000 in New York.

Mostel, nephew of “Fiddler on the Roof” star Zero Mostel, composed the work after a Japanese recording company commissioned him in 1993 to provide a soundtrack for an audio version of the children’s classic. The recording was released in 1994.

In Berlin, children listened rapt to the performance, some clutching stuffed Babar toys. Images from the picture book were projected on screens above the stage at the Kammermusiksaal. It was performed by the Academy of the Berliner Philharmoniker and narrated by the German actor Hans-Jürgen Schatz.

Mostel told JTA the European premiere was especially meaningful to him, as grandson of European immigrants to the U.S. His maternal grandfather, a Lithuanian-born rabbi, settled with his family in New Jersey, while his paternal grandfather, Israel Mostel, a vintner from a town near Vienna, arrived in the U.S. “just in time for the Prohibition.”

The composer told JTA he hopes the work will travel in Germany as widely as it has elsewhere.