The Beauty of the Bricks 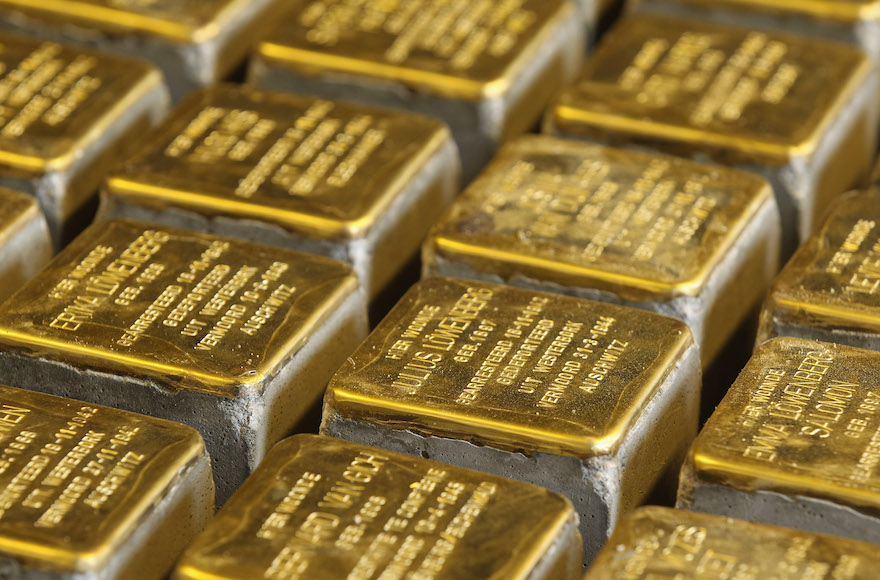 When I “stumbled” onto a Holocaust memorial I had no idea how the Shoah would become a vital part of my teen life.

A few years ago my family and I traveled to Rome. Shopping, sightseeing, relaxing, dining – everything about our vacation was made even better by beautiful springtime weather. Three years later, my second stay in Rome also sported sunny days with a slight breeze. However, this time my trip was about more than just eating pizza (although that part was great too). Honoring Holocaust victims was my focus.

I returned to learn more about the Stolpersteine Project. The project is a memorial throughout Europe that honors the victims of the Holocaust. Its name, “stolpersteine,” is a German word that can be translated to “stumbling blocks” which is an accurate description of the project. Each memorial is a concrete block covered with a gold plaque. Inscribed on the plaque is the person’s full name and information such as when they were deported and to which camp. The block is placed into the ground in front of the person’s last known residence.

I learned of the project during my first trip to Rome when I quite literally stumbled upon a stone. I was immediately fascinated by this mysterious gold plaque in the ground and was determined to uncover the story behind it. My journey with the Stolpersteine Project began.

I decided the best way to learn more about this project was to visit its origin: Austria. I took a trip to Salzburg in July 2015 where Gunter Demnig, the artist who created the Stolpersteine Project, was installing memorials. I was so fortunate to witness this moving process as he transformed an ordinary city block into something meaningful.

While collecting and photographing stolpersteine in Vienna I came across a building that had 28 stones in the ground in front of it. The building was not very large and seeing that 28 innocent people, if not more who are unidentified, were taken from this one building was the second most horrifying thing I saw, after visiting Auschwitz. This was the moment when I realized the power of this project. It was something that needed to be shared with everyone in the world. I’ve decided to start with the United States and it has become my mission to teach others so they can be moved by this inspiring project, just like I was.

Gunter Demnig is a German political artist who came up with the stolpersteine idea around 1990. His request to install a few stones in Salzburg, Austria, was originally denied, but he ignored this and the government could not remove the stones once they were in place because they were considered a memorial. Since then, Gunter has been installing stones all over Europe and requests keep coming in. There are currently more than 50,000 stones in 18 European countries.

Gunter creates and installs every stone himself, which is how I met him after maintaining a brief correspondence prior to my Austria trip. I spoke with Gunter and although his knowledge of English was somewhat limited, I could see that he was extremely passionate about what he was doing and really cares about the people he is helping.

When possible, friends and family of the victims are present at the installations which are attended by stolpersteine committee members and curious bystanders. At the end of each new installation a fresh rose is placed on the stone, a biography of the person is read and the memory is forever embedded into the street.

A young Jewish woman whom I met in Germany told me about one of her friends who is not Jewish, but decided to search through archives to find if anyone was taken from his building in Berlin and killed during the Holocaust. He discovered that 11 people from his building had been murdered in concentration camps so he funded the installation of stolpersteine for every single one of them. A single stone costs 120 euros (around $129) and there are funds available to cover the costs. These incredible memorials have touched so many people and have brought closure to those who lost family during the Holocaust.

Unfortunately, some places have banned these memorials. For example, Munich has been embroiled in a controversy since 2004 over whether stolpersteine should be allowed.

I also made sure to stop in Poland as a part of my research because it is one of the largest extermination sites of Jewish people in all of Europe. A country that once had 3.3 million Jews is now home to only 20,000 and I was devastated to learn that the Polish government also does not allow stolpersteine installations; there is not a single stone in the entire country.

This project faces another challenge: neo-Nazis. They have covered some stones with black paint in an effort to erase them or ripped them right out of the ground. It’s sickening to me that there are still people in the world who think Jews should not exist and want to erase even their memory and pretend like the innocent people who lost their lives never existed in the first place.

Ultimately, I think it is extremely important to spread awareness of this amazing project because so many people benefit. Anyone can request a stone. Many records of people killed during the Holocaust are obtained for stolpersteine from Yad Vashem in Israel, but they are also requested by family members or friends who want to commemorate their loved ones. You can request a stone directly through the official stolpersteine website.

The Holocaust cannot and should not ever be forgotten, but with less Holocaust survivors still alive to share their stories this is in danger of occurring. Gunter Demnig has found a creative and inspiring way of keeping alive the memory of this terrible time in our history, when so many innocent people perished. We, as the last generation to learn about the Holocaust first-hand from those who experienced it, must continue to educate future generations about the horrors that took place, which must never be repeated.

Visit my website American friends of Stolpersteine to read more about my experiences.