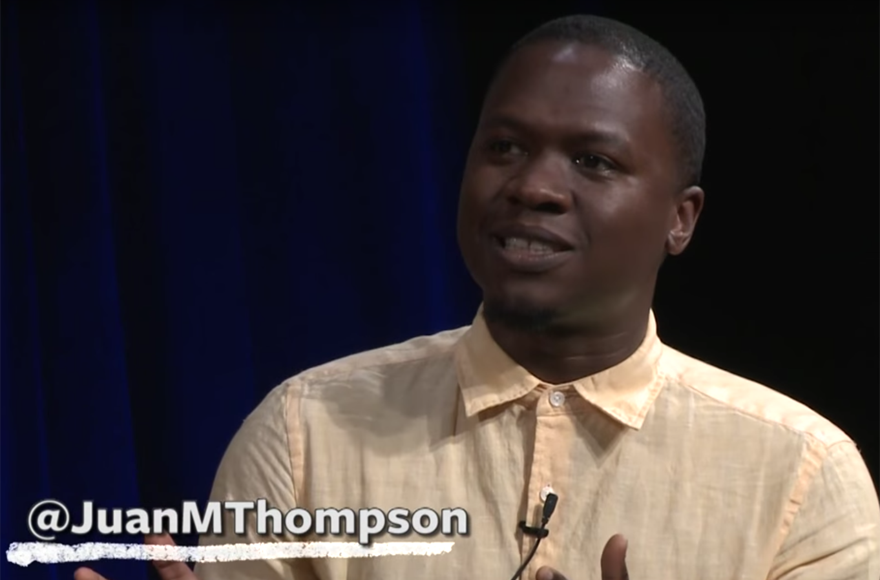 NEW YORK (JTA) — A St. Louis man has been charged for making at least eight bomb threats against Jewish community centers and the Anti-Defamation League.

Juan Thompson, 31, made some of the threats in the name of a former romantic partner he had been cyberstalking, according to a statement Friday by the U.S. Attorney of Southern New York. Thompson has been charged with cyberstalking, which carries a maximum sentence of five years in prison.

“Today, we have charged Juan Thompson with allegedly stalking a former romantic interest by, among other things, making bomb threats in her name to Jewish Community Centers and to the Anti-Defamation League,” U.S. Attorney Preet Bharara said in a statement. “Threats of violence targeting people and places based on religion or race – whatever the motivation – are unacceptable, un-American, and criminal. We are committed to pursuing and prosecuting those who foment fear and hate through such criminal threats.”

NBC News cited “additional sources” saying Thompson is being considered a “copycat” and investigators continue to look for others believed to be behind the wave of threats targeting JCCs.

Thompson made some of the threats in his victim’s name and some in his own in an attempt to portray himself as being framed. In a series of  Twitter posts this week, he claimed his victim was in fact making the threats and framing him.

He also tweeted sympathetic messages expressing support for the Jewish victims of the threats.

But the FBI complaint against Thompson says he was behind at least eight of the threats made in January and February, mostly via email. The complaint saysThompson threatened institutions including the ADL, JCCs in San Diego and New York City, schools in New York and Michigan, and a Jewish history museum in New York City. In the threats to the schools, made on Feb. 1, Thompson referred to a “Jewish newtown,” a reference to the 2012 mass shooting at an elementary school in Connecticut.

The complaint is currently focused on Thompson’s alleged harassment of a woman identified as “Victim-1,” saying he engaged “in a course of conduct that placed [his victim] in reasonable fear of the death of and serious bodily injury to that person.” In addition to the bomb threats, the complaint says the coworkers of Thompson’s former partner received anonymous emails claiming she had a sexually transmitted disease.

Thompson attended Vassar College and is a former journalist who was fired from the online news site The Intercept in 2016 for fabricating sources and quotes in his articles. A statement Friday from The Intercept said of Thompson’s arrest, “These actions are heinous and should be fully investigated and prosecuted.”

On his Twitter account, Thompson made repeated complaints about a woman he had previously dated, at one point claiming she “sent a bomb threat in my name & wants me to be raped in jail.” In another, dated Feb. 27, he tweeted “The @SecretService visited me looked at my tweets, questioned my politics b/c some awful white woman I date reported me. I won’t be silenced.” Thompson is African-American.

According to the complaint, however, Thompson made at least eight JCC and Jewish institution threats “as part of his campaign of harassment” against “Victim-1.” For instance, according to the complaint, on Feb. 21, 2017, Thompson is alleged to have sent an email to the ADL’s midtown Manhattan office blaming the woman for the bomb threats and claiming she would be “making more bomb threats tomorrow.” The next day, according to the U.S. Attorney’s Office, “the ADL received a phone call claiming that explosive material had been placed in the ADL’s midtown Manhattan office.”

Authorities say the emails and phone calls were made by Thompson “as part of a sustained campaign to harass and intimidate” Victim-1.

In total, more than 100 Jewish institutions, mostly JCCs, have received bomb threats since the beginning of the year. The last two weeks saw vandalism at Jewish cemeteries in Philadelphia, St. Louis and Rochester, New York, as well as two more waves of bomb threats called into JCCs, schools and institutions across the country, representing the fourth and fifth waves of such harassment this year. No explosive device was found after any of the calls.

“The NYPD and the FBI have done an outstanding job in this regard,” Paul Goldenberg, director of the Secure Community Network, which coordinates security for Jewish institutions, told JTA on Friday. “We at SCN and the Jewish Federations of North America commend them and hold them in the highest regard.”

The JCC Association of North America said it was “gratified” by the arrest.

“We trust that the perpetrators behind all of the threats will be swiftly identified and brought to justice,” said the organization’s president and CEO, Doron Krakow, in a statement.

The threats prompted clamor for President Donald Trump to condemn the anti-Semitism behind the targeting of Jewish institutions.

After initially demurring to comment directly when asked about the spate of recent anti-Semitic incidents, Trump eventually called the threats to the community centers “horrible” and “painful,” and Vice President Mike Pence paid a visit to a Jewish cemetery vandalized near St. Louis.

FBI, NYPD, and NYS police told us arrest made in bomb threats against ADL;several other Jewish institutions. Thx 2 them!More info as get it.