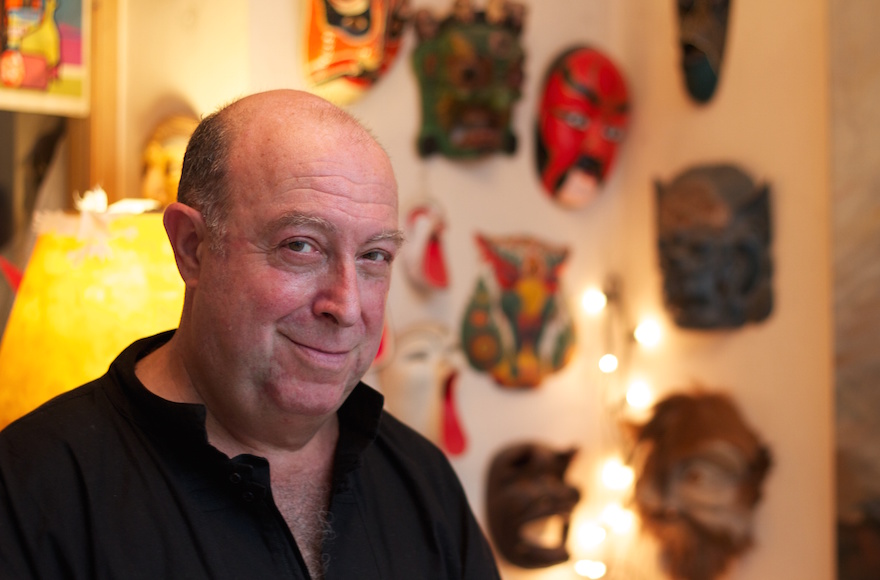 Juan Tajes at his studio in Amsterdam in 2016. (Courtesy of Juan Tajes)
Advertisement

AMSTERDAM (JTA) — For someone who produces and sells masks for a living, it makes sense to set up shop in the center of this city’s famed Red Light District.

After all, there are countless masks and costumes on sale in the many adult toy shops that dot this part of the Dutch capital, which gets its name from the glow of lamps that frame the windows where prostitutes pose for potential customers

The sex stores offer a dazzling variety of naughty costumes, including Dick Tracey suits and Catwoman getups that leave little to the imagination.

Yet those sex accessories are quite different from the masks being made here by Juan Tajes — a Uruguay-born Jewish artist who says he draws inspiration and customers from the unending stream of tourists and gawkers passing through this part of the city at all hours of the day and night. Tajes calls this his neighborhood’s “never-ending masquerade.”

Some of Tajes’ masks reference body parts that refer to the district’s main trade – especially one flesh-colored mask with a projecting proboscis. But most of them are more classical, referencing old European theatrical styles, including the 16th-century commedia dell’arte that inspired Moliere. Others echo even more ancient forms, with blank-eyed likenesses of the sort used in Greek tragedies.

But they all are traceable, says Tajes, to his own Jewish and Catholic roots in Uruguay and the inspiration he draws from living and working in his Red Light District studio.

“I get a lot of inspiration from them, from being constantly surrounded by people from so many places,” Tajes, 70, told JTA last week in an interview ahead of Purim and Carnival — respectively, the Jewish and Christian springtime holidays in which revelers wear identity-altering costumes and disguises.

Around the display window of Taje’s atelier, which is also where he lives, tourists huddle for a closer look at his masks. “There’s a lot of interaction,” he says of the window shoppers. “I think I now know the word for mask in at least 25 languages.”

In an area of town where men – some of them too embarrassed to make eye contact with other pedestrians – window shop for sex just outside the city’s oldest church, Tajes, who settled in the Netherlands 35 years ago, recalled the role that masks played in religions in many parts of the world.

“Some say the origin of the mask in some cultures is to be found in God,” Tajes said. “Masks were used for people who sought to become a god, or at least portray one. But in others, it was a way to hide away from God.”

For one of Tajes’ neighbors, a prostitute from a small town in Macedonia who gave her name as Annie, his masks offer a chance to reflect about her own reality.

“I like looking at these different masks on my way to the room,” said Annie, who on some days of the week works abut 300 yards from Tajes, whom she has never met. “I guess I like these masks because I wear a mask to work every day. I wear my makeup but I also wear a personality that is not really me.”

Though he still enjoys living and working in the Red Light District, Tajes says that increasingly, he is seeing his city becoming increasingly less authentic.

It’s a common observation in a city that used to be a hippie’s mecca but has since gentrified so thoroughly that many locals find it unaffordable – and unbearable because of the ever-growing numbers of tourists flooding it.

“This is not the place where I settled 35 years ago, and I think it has changed for the worse,” said Tajes. As the municipality slashed subsidies that made it possible for less-than-affluent artists to live here, “not much is left now of the community that used to exist here. It has mostly been replaced by tourists.”

Fascinated by the medieval architecture of Northern Europe, Tajes was himself a tourist when he first came to the Netherlands in 1973. That year, a military dictatorship rose to power in Uruguay in a coup d’etat that marked the beginning of a 12-year reign marked by censorship, oppression and torture.

Already abroad and reluctant to subject himself to such a regime, Tajes stayed in the Netherlands, where he ended up having two daughters. Uruguay lost approximately 10 percent of its population during those years.

The son of a Catholic father and Sephardic Jewish mother, Tajes was raised a Catholic. He had an early connection to masks in Montevideo, where he grew up. Carnival is as popular in Uruguay as it is in its northern neighbor, Brazil, and as a boy Tajes used to enjoy the colorful processions and the flamboyant costumes and masks.

“The masks signify a new start to me,” he said.

Both Purim and Carnival tend to highlight the change of seasons, from grim winter to hopeful spring.

“It’s not surprising that Purim and Carnival used to mark beginnings,” Tajes said. “There’s something about putting on a mask that speaks of new possibilities, new beginnings.”