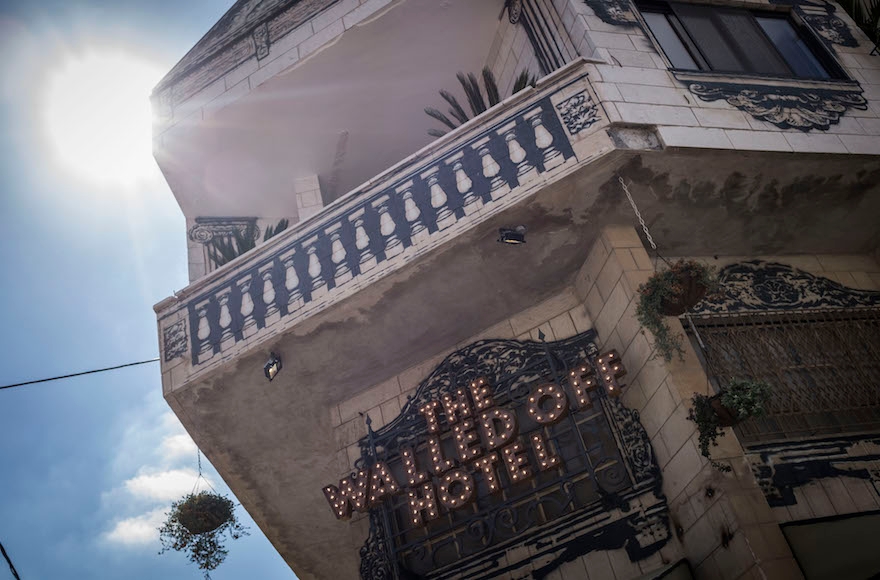 Looking for a hotel with the “worst view in the world”?

If so, according to the elusive street artist Banksy, you should stay in his latest sardonic creation: an art-filled guest house and political protest vessel mere steps from a section of Israel’s West Bank security barrier.

The British artist’s project, aptly titled “The Walled Off Hotel” (a pun on “Waldorf”), features nine real rooms, full of original Banksy artworks, that real people can stay in starting March 11. The Times of Israel reports that the cheapest room will cost $30.

And of course, all of the rooms have a view of the security barrier.

A few reporters were allowed into the building, situated in the primarily Arab city of Bethlehem, for a sneak preview last week. They described a “museum,” a gallery and a luxurious “presidential suite” with a full cocktail bar. The set of new artworks includes a Greek-style sculpture engulfed in what looks like tear gas and a wall painting above a bed of a Palestinian and an Israeli having a pillow fight.

Banksy has been a critic of Israeli actions in Gaza and the West Bank. After the 2014 Gaza War, he found a way into Gaza and created a series of works, included a kitchen painted on the wall of a bombed-out house. “I explained I wanted to highlight the destruction in Gaza by posting photos on my website —but on the internet people only look at pictures of kittens,” he wrote at the time. In 2005 he stenciled a series of cartoons on the West Bank side of the concrete portions of the security barrier, which he charged “essentially turns Palestine into the world’s largest open prison.”

The hotel project appears to be more even-handed in its approach to the Israeli-Palestinian conflict, with a website explaining that “[d]epending on who you talk to,” the security barrier is “either a vital security measure or an instrument of apartheid.”

The website’s FAQ-style page also asks “Is it anti-Semitic?” This is the response:

“Definitely not. The Walled Off Hotel is an entirely independent leisure facility set up and financed by Banksy. It is not aligned to any political movement or pressure group. The aim is to tell the story of the wall from every side and give visitors the opportunity to discover it for themselves. We offer an especially warm welcome to young Israelis. Absolutely no fanaticism is permitted on the premises.” 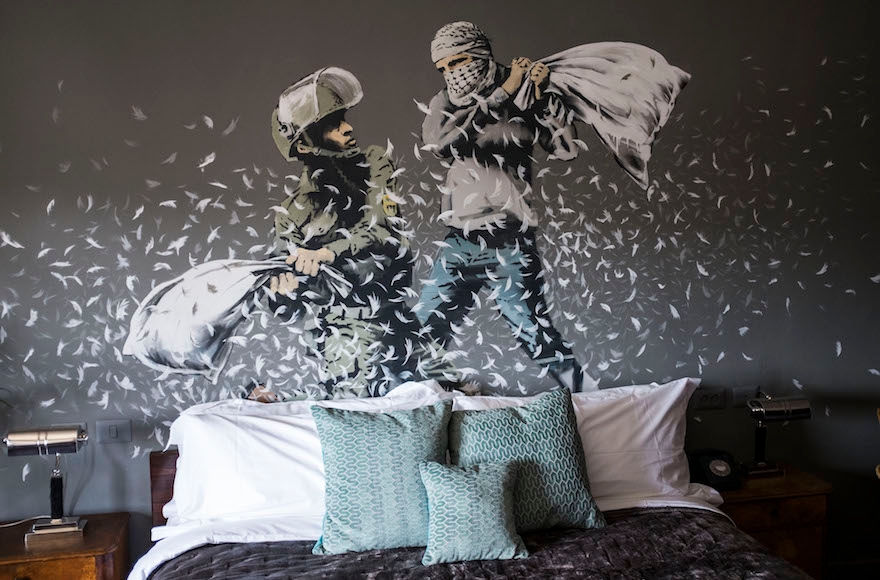 A view inside the Banksy room of the Walled Off Hotel in the West Bank town of Bethlehem, March 4, 2017. (Ilia Yefimovich/Getty Images)

Banksy — who is known around the world for his provocative, politicized and often unannounced graffiti and art installations and for fiercely guarding his true identity — chose to open the hotel this year for a reason: It is the 100th anniversary of the Balfour Declaration, a letter from Britain’s foreign secretary proclaiming his nation’s support of a “national home” for the Jewish people.

“We’re aiming to be here for the whole of the centenary year, maybe longer if people come,” the website reads.

Museum at the #Banksy Walled Off Hotel — signing of the Balfour declaration pic.twitter.com/eupHqw9jWx