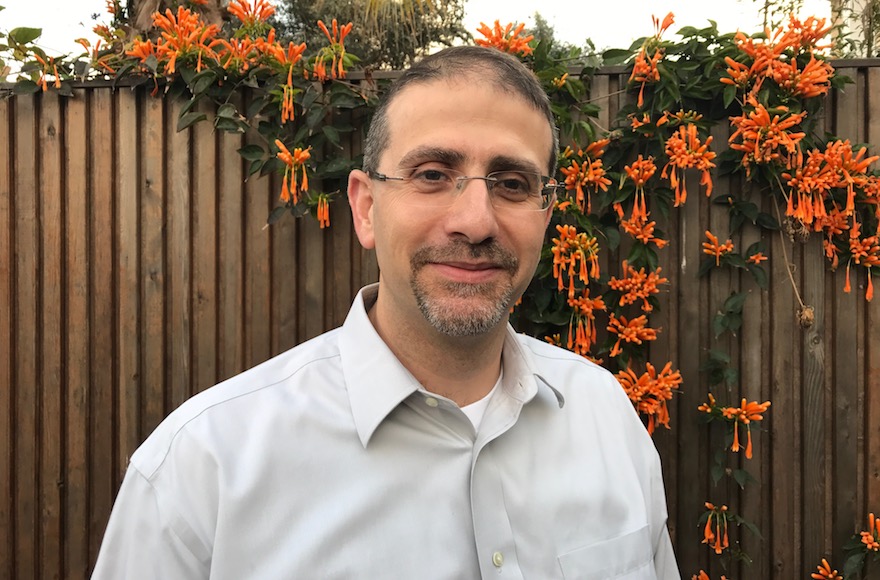 Before stepping down as the U.S. ambassador to the country in January, he said he would stay long enough for his daughters to finish the school year. On Sunday, he announced he would be sticking around a little longer to join the Institute for National Security Studies, a top think tank in Tel Aviv. He and his wife, along with their three daughters, are living within commuting distance, in a rental house in an upscale neighborhood of Raanana.

The plan is to stay for “a number of months,” Shapiro said in an interview next to his backyard pool, which he hopes to get a chance to use this summer, and not to immigrate.

“I can say the primary reason we made the decision was to let the kids finish their school year. But we are very much looking forward to the opportunity to experience life in Israel as a normal family,” he said in an interview next to his backyard pool, he said. “It was something we considered long ago, like many Jewish parents.”

Shapiro acknowledged it was somewhat unusual for him to remain in country after his service. But his ties to Israel are much more than professional. The six years he spent representing the Obama administration here were part of a lifelong commitment to the country.

Shapiro first visited in 1973, when he was 4 years old. His parents, both English professors at the University of Illinois, brought him and his young siblings to Jerusalem for a sabbatical. When the Yom Kippur War broke out in October, they abandoned their research to contribute to the war effort — volunteering at a bakery, a chicken coop and a school, “anywhere jobs had been left vacant by men who went to fight,” Shapiro said.

The experience left an impression on Shapiro, who still recalls the air raid sirens and bomb shelters. It also created a connection between his family and Israel that persisted after they returned home to Champaign, Illinois.

“By the time we left, we as a family, our relationship with Israel had been transformed, and it really forged a bond that I don’t think would have happened without the war,” Shapiro said. “For the rest of my childhood, Israel was this very, very prominent part of life and discussion.”

Shapiro returned to Israel in 1987 for a gap year before college and again in 1989 for a year abroad at the Hebrew University of Jerusalem with his then-girlfriend Julie Fisher, whom he had met at a Reform Jewish summer camp in Wisconsin and started dating as a counselor there. Building on the Hebrew he learned at the camp and at synagogue growing up, Shapiro became fluent in the language.

“I just fell in love with Israel, and I knew from then that I would keep coming back,” Shapiro said.

After returning to the United States, Shapiro and Fisher both graduated from Brandeis University. They got married in 1992 while Shapiro was earning a master’s degree in Near Eastern and Judaic Studies at Harvard University. When he graduated, they moved to Washington, D.C, where Shapiro did political and consulting work on Capitol Hill and Fisher worked at prominent local Jewish day school. Between 2000 and 2006, they had a daughter and adopted two others from Guatemala.

Sometimes, the couple plotted ways to spend a year in Israel, waiting for a time when the kids were old enough to “really get something out of it, as I did,” Shapiro said.

Those plans were set aside during Barack Obama’s presidential campaign in 2008, though they did manage a “great” family trip to Israel after the Democratic primaries, he said. Shapiro was one of many Chicago-area Jews who advised Obama when he was a Democratic U.S. senator for Illinois, including on his first trip to Israel in 2006, and worked on the campaign.

It turned out, he said, that he and Obama shared similar political views: They are both consensus-minded progressives when it comes to the U.S., and strong supporters of a two-state solution in Israel — in part to ensure Israel’s Jewish and democratic character. The idea of a homeland also resonated with Obama, he said.

“But of course I understood that wherever me and my family actually ended up choosing to live, our destiny was going to be shaped in part by the survival and the success of Israel and that we wanted to be connected to it. Whether living in it or whether living in the Diaspora, that connection was really profound and a direct connection. I think it’s a little different for a non-Jewish person.”

After serving several years as a Middle East advisor on the National Security Council, Shapiro in 2011 was appointed ambassador to Israel. The family moved into the official residence in Herzliya, just west of Raanana, and began attending a Conservative synagogue, as they had in Washington. The only person to attend every meeting between Obama and Israeli Prime Minister Benjamin Netanyahu, Shapiro was often caught in the crossfire of the leaders’ famously contentious relationship.

When Shapiro criticized Israeli policy in the West Bank last January, a former Netanyahu advisor publicly called him a “little Jew boy.” And after Secretary of State John Kerry’s speech in December blasting Israeli settlement expansion, Netanyahu summoned Shapiro for a dressing down.

But Shapiro said he had a friendly working relationship with the prime minister. “My personal relationship with Netanyahu was always very good, very warm. We were able to talk candidly,” he said. “There were definitely occasions where we had meetings that reflected the tensions between our governments, but it was never personal.”

Shapiro was well-liked in Jerusalem, even among right wing ministers and lawmakers. At a farewell party for Shapiro at the Knesset on Jan. 17, ministers from the ruling Likud party heaped praise on him even while acknowledging U.S.-Israel tensions. Minister Yuval Steinitz, a close ally of Netanyahu, called him “the best U.S. ambassador to Israel the country has ever had.” Shapiro’s most important role – “fulfilled in an impeccable manner during a period of passionate disagreements and difficult conditions” – was as a “shock absorber,” he said.

Asked if there was a downside to an ambassador having a personal connection to the country where he serves — as does David Friedman, President Donald Trump’s ardently pro-settlement ambassador-designate  — Shapiro said it had worked for him. But he stressed the importance of serving the entire country. Shapiro made an unprecedented effort to do this, regularly appearing in mainstream, national religious and haredi media.

“I thought it was ‘davka’ important to have very open, very friendly dialogue with parts of the society that I didn’t know and maybe that we wouldn’t agree on certain issues,” he said, noting that the ambassador ultimately acts and speaks on behalf of the president.

Since leaving his post on Jan. 20, Shapiro has been speaking for himself. He has written opinion articles, including one for Foreign Affairs laying out some of the potential benefits of a well-managed move of the U.S. embassy to Jerusalem from Tel Aviv. And he has opened a new personal Twitter account, where he posts wonky takes on Israel-U.S. relations, including threads that are widely shared among journalists and influencers in the Jewish world.

He has not shied away from tweeting criticism of Trump on the issues he knows best: Israel, diplomacy and Jews. Over the past month, Shapiro dismissed the president’s stated willingness to give up on a Palestinian state as “theater,” said the administration was “stunningly dumb” to nix former Palestinian Authority Prime Minister Salam Fayyad ’s appointment as a U.N. envoy, and repeatedly questioned the White House’s failure – until recently – to condemn the bomb threats against Jewish community centers across the United States.

“Seriously, what is wrong with him?” he tweeted of the president on Feb. 15. “… I can’t understand why he can’t condemn blatant anti-Semitism when he sees it.”

Asked if he is enjoying speaking his mind, Shapiro laughed and gave a diplomatic answer. “I am. I can’t deny that. I spent more than 20 years of my life in government service, which I’m very proud of and was very content to do. But of course it comes with the built-in restriction that you articulate publicly the policy of the people you work for,” he said.

Still, Shapiro has largely kept his disagreements with the Israeli government to himself, sticking to touting the country’s LGBT-friendly culture and high-tech prowess. He explained that he has a different relationship with Israel than with the United States.

“As a concerned and patriotic American citizen, I think I have every right and even responsibly to say what I think and offer my best – hopefully constructive – commentary and analysis about my own government, and that means there will be times that it will include criticism,” he said. “I try to maintain a more analytical approach to policy questions from the point of view of the Israeli government. You know, I remain a guest in this country, and I think that’s an appropriate way for me to conduct my activities at this stage.”

Shapiro said along with his research as a distinguished visiting fellow at INSS, he plans to continue writing, including possibly a memoir. Fisher is looking for a job in education. Their daughters will start a new school year in the fall, he said, and it would be a shame to move in the middle of their studies.