US ‘Women’s Strike’ platform calls for ‘decolonization of Palestine’ 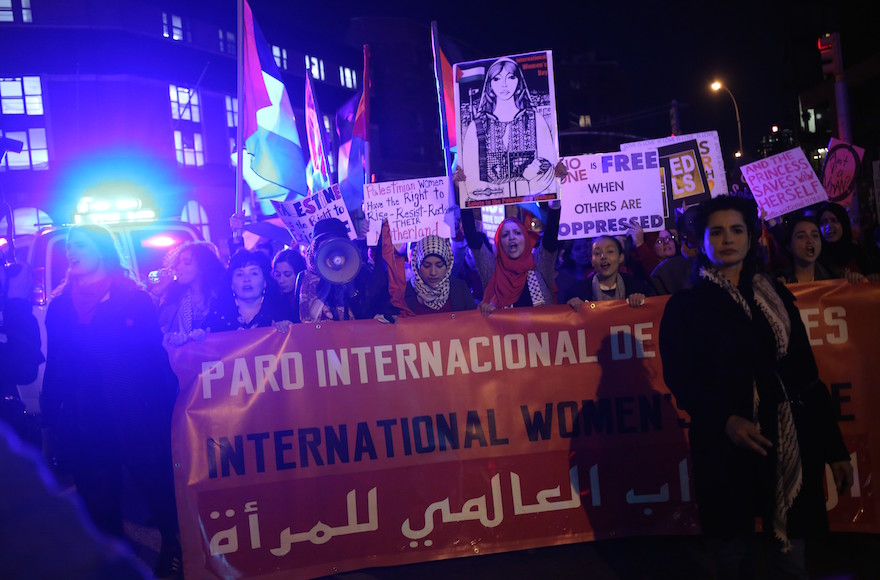 (JTA) — The platform for a strike to support feminism and women’s rights drew criticism from some over its call “for the decolonization of Palestine.”

The statement on Palestine is included in a section on “Antiracist and Anti-imperialist Feminism” in the platform for the U.S. affiliate of the International Women’s Strike. The grassroots feminist movement organized events around the world on Wednesday.

It groups solidarity with Palestine with other causes, including Black Lives Matter, “the struggle against police brutality and mass incarceration,” and immigrant rights.

“We want to dismantle all walls, from prison walls to border walls, from Mexico to Palestine,” the platform reads.

Critics of the platform included Emily Shire, the politics editor of the women’s news site Bustle. She wrote in a New York Times op-ed published Tuesday that as a Zionist she was “troubled” by the plank on Palestine.

“I find it troubling that embracing such a view is considered an essential part of an event that is supposed to unite feminists,” she wrote. “I am happy to debate Middle East politics or listen to critiques of Israeli policies. But why should criticism of Israel be key to feminism in 2017?”

Shire also criticized the strike for the involvement of Rasmea Odeh, a Palestinian woman convicted and sentenced by an Israeli military court in 1970 to life in prison for two bombing attacks, including one in 1969 that killed two Israelis.

Odeh was among the eight authors of an op-ed article in The Guardian announcing the movement. She confessed to planting the bomb, though in recent years has claimed that the confession was given under torture, which is disputed by Israeli officials.

“While the fairness of Ms. Odeh’s conviction is debated, the fact that she was a member of the Popular Front for the Liberation of Palestine, which was categorized as a terrorist organization by the State Department, is not,” Shire wrote.

The niece of one of the victims of the 1969 attack also criticized the strike over Odeh’s involvement.

“But, explain how my family is supposed to reconcile the reality that the woman who stripped my uncle of his life is now deemed a hero by many of my fellow Americans. What justification is there for Rasmea Odeh, a woman who killed two people (with the intention of killing more!) to lead a peaceful fight for human rights?” Terry Joffe Benaryeh wrote in an op-ed published last week on Huffington Post.