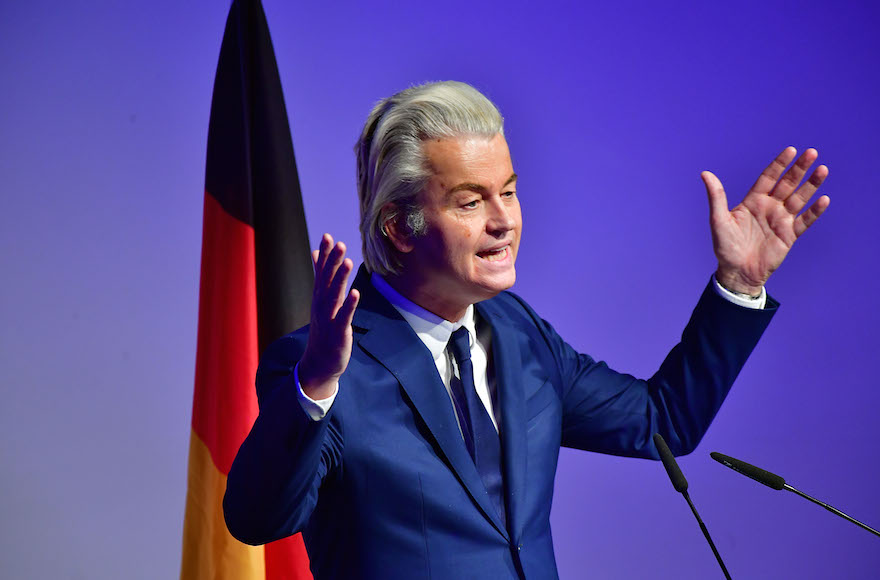 (JTA) — The party of Geert Wilders, a Dutch anti-Islam lawmaker who critics say is a racist, is the third-most popular among local Jews, according to a pre-elections poll of community members.

With 814 respondents, the poll, whose results the Nieuw Israelietisch Weekblad Jewish weekly published Thursday ahead of the March 15 general elections, surveyed nearly 2 percent of the Jewish population of the Netherlands. It is one of the most comprehensive polls conducted in recent years among the Dutch Jewish community.

Wilders’ right-wing populist Party for Freedom, however, has the vote of 10 percent of Dutch Jews, according to the poll. The party enjoys a 15-percent approval rate in the general population, according to other polls, and is in a tight race for the lead with the ruling, center-right People’s Party for Freedom and Democracy.

Among Dutch Jews polled, the ruling party was the most popular, with 17 percent, followed by the center-left Labor Party, which received 11 percent.

The deeply conservative Reformed Political Party and the more liberal conservative Christian Union received together another 17 percent of the Jewish vote – a vastly higher proportion than their support in the general population. That support likely owes to their stridently pro-Israel and pro-Jewish policies.

The Socialist Party, which is distrusted by many Dutch Jews for its support of Palestinian causes, received 1.2 percent of the vote.

Overall, right-wing and center-right parties garnered 55 percent of the vote in the poll.

NIW conducted the survey with help from the Crescas Jewish cultural group and other organizations.

Approximately 75 percent of the Jews polled said they viewed “Muslim values as a threat to Europe.” The same proportion said Muslim culture is more violent than others. Approximately 40 percent of respondents also said Islam belongs in Europe, whereas another 40 percent said it does not.

Wilders was convicted of inciting discrimination in December for promising supporters to make sure the Netherlands has fewer Moroccans.

Despite the support of some Dutch Jews, the Party for Freedom has angered many of them with its support of a ban on Jewish ritual slaughter and for teaming up with other far-right groups, including France’s National Front.

Wilders was acquitted in 2011 of hate-incitement charges in connection with a short video in which he inveighed against Islam, a religion he has called “evil and fascist.”

Wilders, who in his youth lived for two years on an Israeli moshav in the Jordan Valley, has called Israel “a place where I feel home” and said it was “close to his heart.” He has also called Israel a “canary in the coal mine” and “the West’s first line of defense against Islam.” He has repeatedly said he is arguing for “Judeo-Christian values,” which he says are threatened by Islam in the Netherlands and elsewhere.