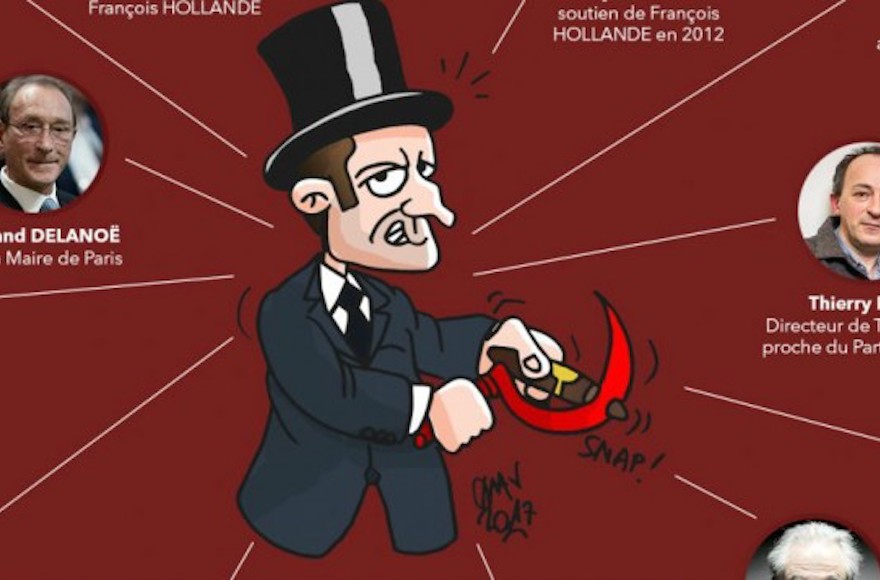 An apparently anti-Semitic cartoon published by the French Republican party on March 10, 2017. (Screenshot from Twitter)
Advertisement

The Republican Party’s apology on Sunday came a day after Fillon slammed the image as “unacceptable.” He said he understood the outrage it had caused “because it evoked the images of a dark period of our history and exploited an ideology that I have always fought against.”

“Politics is tough but it must remain dignified. I will not tolerate my party using caricatures that use the themes of anti-Semitic propaganda,” Fillon tweeted, saying he had demanded his party chief apologize and sanction the people responsible.

The Republicans on Friday posted — and then quickly deleted — an image of the independent centrist Macron with a hooked nose, wearing a top hat and cutting a cigar with a red sickle. The image was reminiscent of anti-Semitic propaganda from World War II, when France’s Vichy government collaborated with the Nazis to deport and exterminate Jews.

Macron is not Jewish, but in the past he was an investment banker at a French bank controlled by the Rothschilds, a wealthy Jewish family that has long donated heavily to Zionist causes and been the subject of anti-Semitic conspiracy theories.

A spokesman for Macron, Benjamin Griveaux, called it “extremely worrying” that the caricature “draws on the anti-Semitic imagination.”

Fillon, a former prime minister, was once the favorite to win the presidency. But he has fallen to third place in the polls for the first round of voting on April 23 since allegations surfaced that he had arranged fictitious public service jobs for his wife and children. Ahead of him are Macron and far-right candidate Marine Le Pen. Only the top two candidates will advance to the runoff on May 7.