How Israeli women turned this Purim into a feminist holiday 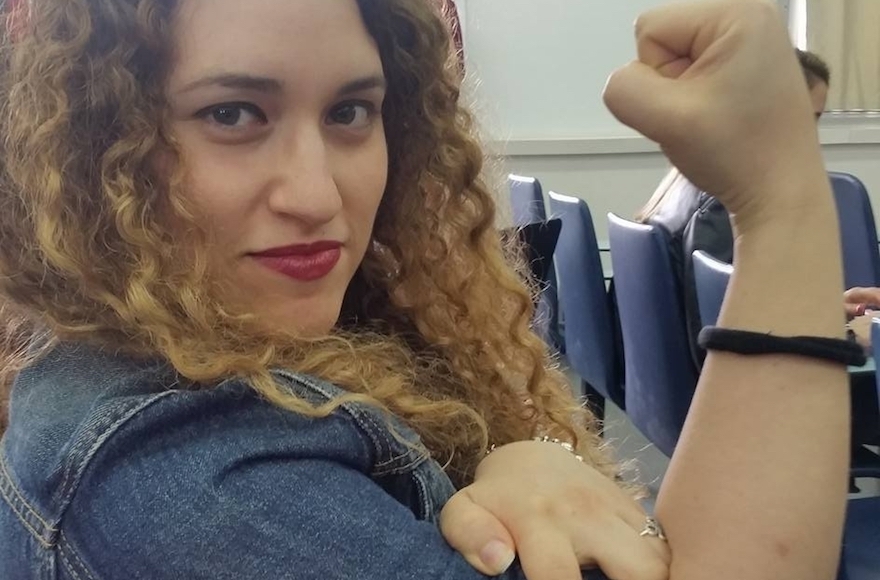 TEL AVIV (JTA) – Wonder Woman, Rosie the Riveter and a female Israeli fighter pilot walked into a bar. They were just a few of the heroines out in Tel Aviv Saturday for the night of Purim.

With International Women’s Day falling a day before the holiday weekend this year, women all over Israel dressed up as empowered feminist icons throughout the week. Soldiers and superheroes abounded on the streets and on social media, and Rosie, the World War II symbol of female can-doism, seemed to be everywhere.

Shir Yorkevitz and two other teachers wore Rosie the Riveter costumes to their middle school in Herzliya on Wednesday. Yorkevitz, a 26-year-old history teacher, said she wanted to send a feminist message to her students.

“It wasn’t just a cute costume to celebrate Purim, but was also a way to get the girls to talk about women’s rights,” she said. “It’s nice that it’s a really easy costume to make.”

Busy studying for her final exams in political science at Tel Aviv University, Eilit Rozin sent her mother into the city to get her a Wonder Woman costume. Robin said she was inspired by Israeli actress Gal Gadot’s portrayal of the character, noting that she was one of the few women to get her own Marvel Comics movie, “Wonder Woman,” which comes out this summer. 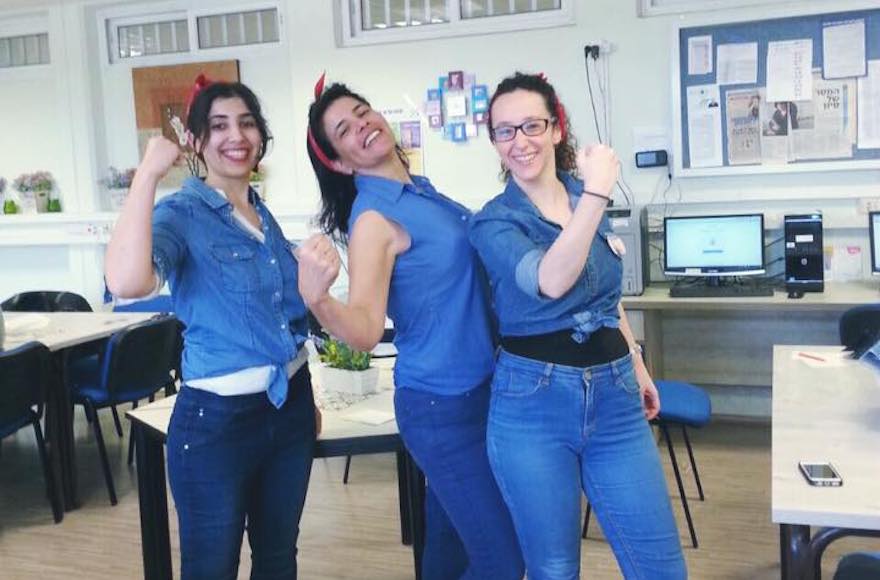 Shir Yorkevitz, right, and two other teachers dressed as Rosie the Riveter flexing at a middle school in Herzliya, Israel, March 8, 2017. (Courtesy of Yorkevitz)

“I really love superhero movies and TV shows, but there are barely any women superheroes,” she said. “You see them as sidekicks or playing small parts. For me, it’s really important to see women actually fighting the bad guys.”

Rozin, who was Rosie the Riveter last year, said Wonder Woman felt particularly apt after she saw the video broadcast March 7 on TV of a prominent religious Zionist educator, Rabbi Yigal Levinstein, saying that military service “has driven our girls crazy.” She said she and many other real-life superwomen with whom she served in the army were miffed by the comments.

“It’s an odd conception and people need to get over it,” Rozin said.

Some rabbis rushed to Levinstein’s defense, and Interior Minister Aryeh Deri called him “brave” for daring to speak out. But the overwhelming reaction in Israel was condemnation, including by Prime Minister Benjamin Netanyahu and Defense Minister Avigdor Liberman. On March 9, a tank commander said the army would begin the controversial practice of recruiting women into the Armored Corps next month.

The backlash to Levinstein’s comments in the media and on Facebook blended into International Women’s Day and Purim coverage. Widely shared on Facebook was a story  from Yediot Acharanot’s weekend magazine about two young girls who dressed up like their officer mothers for Purim. 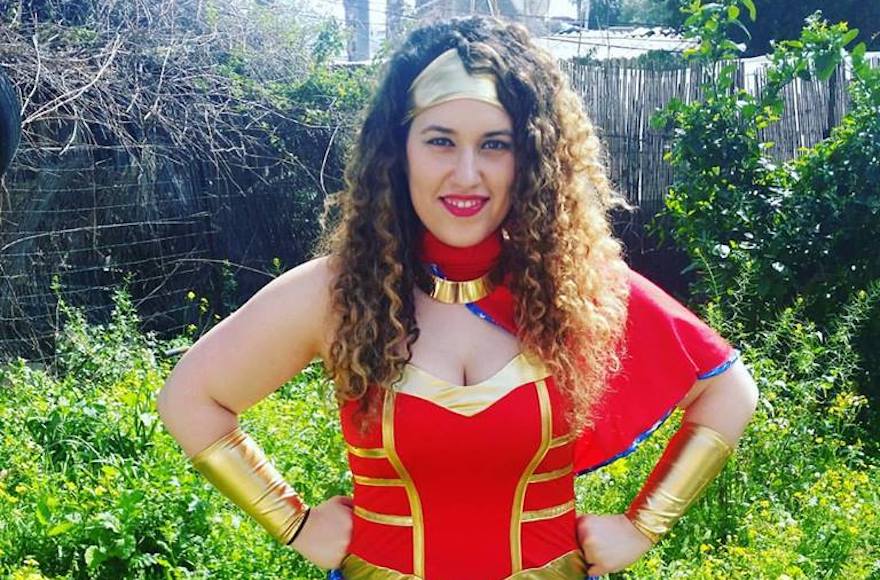 Eilit Rozin showing off her Wonder Woman costume outside a friend’s house in Tel Aviv before the city’s big Purim party, March 10, 2017. (Courtesy of Rozin)

“I’m really proud of my mother, and so I wanted to be like her, but her uniform was too big on me,” Liel Dahan, 9, was quoted as saying of her mother, an officer in the military police. In a photograph accompanying the story, Liel is shown saluting beside her machine gun-toting mom. They are wearing matching uniforms.

Yorkevitz said few of her students — either in the middle school or high school where she works — wore what could be considered feminist costumes this year “unless you count Fiona from ‘Shrek.'”

“The girls just want something that makes their body look nice, and the boys don’t really dress up unless they are doing it with a girl,” Yorkevitz said.

The female students “figure women have equal rights. They can wear pants and do whatever job they want, so they think the fight is already over,” she added.

Yorkevitz said even the other teachers she recruited to wear Rosie the Riveter costumes had to be briefed on the character beforehand. But Rozin, for one, appreciates the sacrifices of the women who came before her. On International Women’s Day, she bought flowers for her mother.

“I told her she’s my role model because she’s really strong and really independent,” Rozin said. “She’s my favorite superhero.”

More than 1,000 senior US police officers have visited Israel. Here’s what they learn from Israel’s police force – and why it’s controversial.