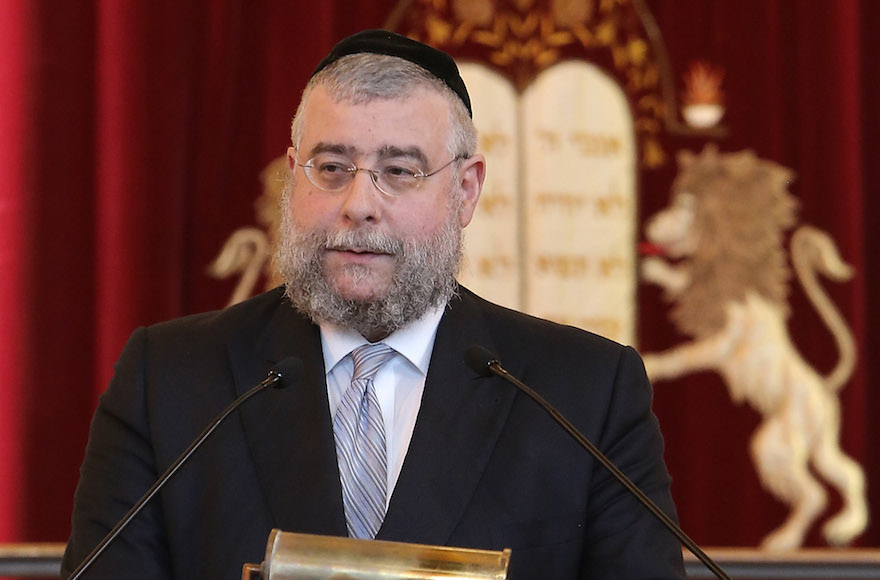 Pinchas Goldschmidt, president of the Conference of European Rabbis, at a rabbinical ordination ceremony at the Westend synagogue in Frankfurt, Germany, Sept. 26, 2016. (Hannelore Foerster/Getty Images)
Advertisement

PARIS (JTA) — A European Union court ruled that companies can prohibit their employees from wearing religious clothing and symbols, sparking condemnation from a rabbinical group that the decision amounts to saying “faith communities are no longer welcome.”

The ruling Tuesday by the European Court of Justice in Luxembourg also said that customers cannot simply demand that workers remove headscarves if the company has no policy barring religious symbols.

“An internal rule of an undertaking which prohibits the visible wearing of any political, philosophical or religious sign does not constitute direct discrimination,” the court said in a statement.

The ruling, which came amid a rise in the popularity of anti-Muslim politicians in Europe over the proliferation of jihadist attacks on the continent and ethnic and religious tensions, was on two lawsuits filed by Muslim employees who were sanctioned for wearing religious symbols or prohibited from doing so.

“This decision sends signals to all religious groups in Europe,” Rabbi Pinchas Goldschmidt, president of the Conference of European Rabbis, said in a statement Tuesday. “With the rise of racially motivated incidents and today’s decision, Europe is sending a clear message; its faith communities are no longer welcome. Political leaders need to act to ensure that Europe does not isolate religious minorities and remains a diverse and open continent.”

One of the lawsuits that led to the ruling was by an employee of the Belgian branch of G4S, the London-listed outsourcing and security company. After three years at the firm she decided she wanted to start wearing a headscarf at work for religious reasons. She was fired in June 2006 for refusing to take off her scarf. The company said she had broken unwritten rules prohibiting religious symbols.

In the second case, design engineer Asma Bougnaoui was fired from a consultancy firm, Micropole, following a complaint from a customer who claimed his staff had been “embarrassed” by her headscarf while she was on their premises giving advice. Before taking the job she had been told that wearing a headscarf might pose problems for the company’s customers.

Last summer, dozens of French municipalities banned the burkini, a full-body swimsuit favored by Muslim women, with the backing of the French government before a French court ruled the action was unconstitutional. Many Europeans believed the ban violated personal and religious freedoms, but others in support of the prohibition regarded the burkini and other clothing favored by Muslims as a political statement.

Marine Le Pen, the leading candidate in the presidential race in France, said she would ban Muslim headcovering if she were elected. Asked whether she would do the same for the kippah, the head of the far-right National Front party said she would do so to preserve equality.