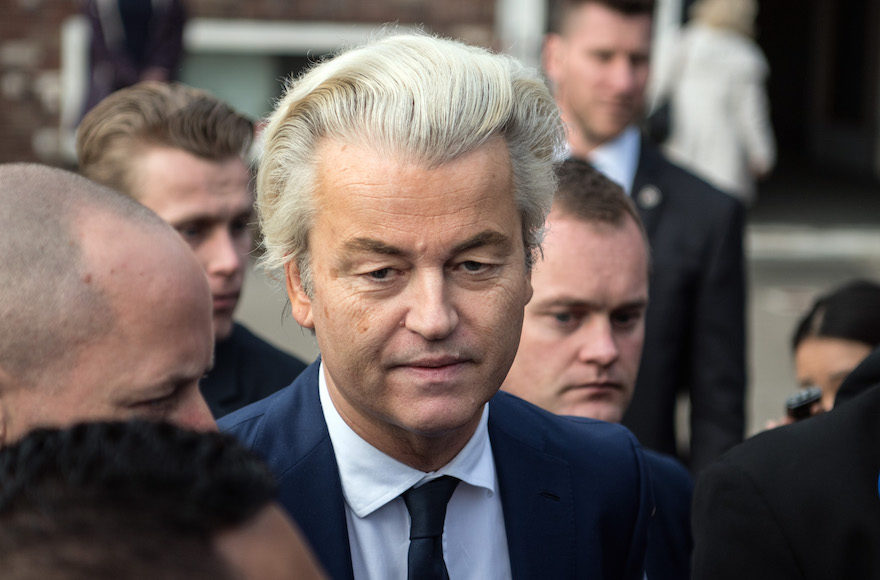 Geert Wilders, leader of the right-wing and anti-Islam Party for Freedom, speaking to the media after casting his vote during the Dutch general election in The Hague, March 15, 2017. (Carl Court/Getty Images)
Advertisement

AMSTERDAM (JTA) — The Dutch center-right ruling party emerged as the Netherlands’ largest in exit polls from the general elections Wednesday, despite predictions of a major electoral victory for the anti-Islam party of Geert Wilders.

Volkskrant Daily exit polls showed Prime Minister Mark Rutte’s People’s Party for Freedom and Democracy receiving 31 seats out of the Dutch lower house’s 150 and 19 for Wilders’ Party for Freedom. The centrist Christian Democratic Appeal and the left-leaning D66 party also had 19 seats, according to the polls.

In the 2012 elections, the ruling party received 41 seats and the Party for Freedom garnered 15.

The Dutch media have hedged the exit poll results regarding the Party for Freedom, citing the reluctance of many of its voters to identify as supportive of the party, whose positions diverge from mainstream rhetoric about the European Union, Islam and immigrants from Eastern Europe and the Middle East.

In the exit polls, Wilders’ party replaced Dutch Labor as the country’s second largest. Labor picked up only nine seats this year, according to the exit polls, compared to 38 in 2012.

The Netherlands is ruled by a coalition government. The kingdom’s monarch appoints the politician he feels has the best chance of assembling a viable coalition. Typically the leader of the largest party is appointed.

“We have won seats!” Wilders wrote on Twitter. “First win is ours! And Rutte is far from rid of me!!”

Wilders was convicted of inciting discrimination in December for promising supporters to make sure the Netherlands has fewer Moroccans. He has called Islam a “fascist ideology” and supports banning the dissemination of the Quran, which he says should be subject to the same limitations imposed on Adolf Hitler’s “Mein Kampf.”

Despite the support of some Dutch Jews for the Party for Freedom — in a poll from earlier this month among Dutch Jews, approximately 10 percent of respondents said they favored it — the party also has angered many Jews with its support of a ban on Jewish ritual slaughter and by teaming up with other far-right groups, including France’s National Front.

Wilders was acquitted in 2011 of hate-incitement charges in connection with a short video in which he inveighed against Islam.

Wilders, who in his youth lived for two years on an Israeli moshav in the Jordan Valley, has called Israel “a place where I feel home” and said it was “close to his heart.” He has also called Israel a “canary in the coal mine” and “the West’s first line of defense against Islam.” He has said repeatedly that he is arguing for “Judeo-Christian values,” which he claims are threatened by Islam in the Netherlands and elsewhere.