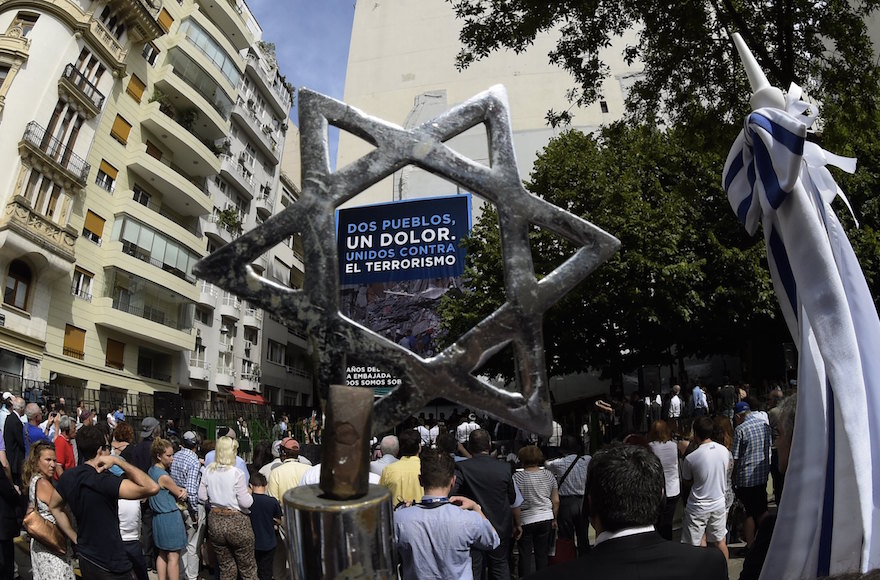 People at a ceremony commemorating the 24th anniversary of the bombing of the Israeli Embassy in Buenos Aires, March 17, 2016. (Juan Mabromata/AFP/Getty Images)
Advertisement

BUENOS AIRES, Argentina (JTA) — The 1992 terrorist attack against the Israeli Embassy in Buenos Aires was remembered in the Argentine city exactly 25 years after it was blown up by a car bomb.

The ceremony marking the attack took place at 2:50 p.m. Friday, the time that the embassy was destroyed in 1992 in an attack that killed 29 and injured 242.

Prior to the ceremony, Argentine President Mauricio Macri met for the first time with the Israeli survivors and relatives of victims of the attack. Macri hosted the group of 50 Israelis at his official residence.

The president tweeted about the visit to his more than 3,741.000 followers: “After 25 years we remember the victims of the painful terrorist attack to the Israeli embassy with relatives and survivors.”

Among those who met with Macri and participated in the remembrance ceremony were Israel’s current ambassador to India and Sri Lanka, Daniel Carmon, whose wife, Eliora, was killed in the attack; the Israeli ambassador to Argentina at the time of the bombing, Yitzhak Shefi, and the director general of Israel’s Foreign Ministry, Yuval Rotem.

At 2:50 p.m., after a siren and a moment of silence, Rabbi Tzvi Grublatt, the head of Chabad-Lubavitch in Argentina, recited the Mourners’ Kaddish and read the names of the 22 identified victims; seven victims remain unidentified.

Rotem spoke in Hebrew, which was translated to Spanish for the crowd. He blamed Iran for the attack and recalled those killed and survivors.

Carmon, who was the consul at the Buenos Aires embassy, said at the ceremony in Spanish: “Nowadays I’m between the past and the present. Remembering the tragedy that we suffered 25 years ago and celebrating the first 25 years of diplomatic relations between Israel and India, the country where I serve as ambassador. I’m between two worlds, the world that I lost in the past and the achievements of the present.”

He added: “My personal heroes are the children. The children who recovered from the tragedy and continue to smile and play. My five children, who lost their wonderful mother. Also the young of the local Jewish community are my heroes. They demonstrated last night here asking for justice. They are the ambassadors of memory; they are the hope of the future.”

The current Israeli ambassador to Argentina, Ilan Sztulman, said the Jewish and Israeli communities cannot tolerate another 25 years without justice.

Sztulman turned to Vice President Gabriela Michetti, who was with him on stage, and said: “Ms. Vice President, we can’t forget. Another 25 years cannot pass with the murderers responsible for this terrible attack still living quietly in Tehran, in Homs.”

Michetti announced during the ceremony a project to declassify Argentine information about the attack.

Among the crowd were congressmen from Chile; more than 50 representatives of Jewish community centers in the United States; members of the World Congress of LGTB Jews,  and a delegation of students from ORT and Tarbut schools.

After the event, officials of both countries took a photo in which they adopted the stance of Argentine celebrities participating in the campaign to stop terrorism, which features the motto “peace without terror.”

Argentina has accused Iran of the 1992 attack and also of the deadly 1994 bombing of the AMIA Jewish center in Buenos Aires, but both officially remain unresolved.