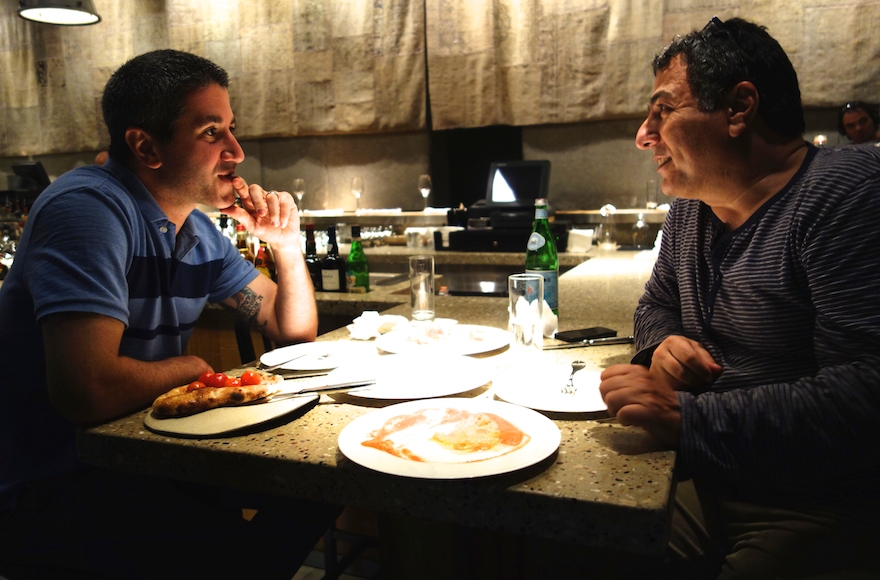 (JTA) — “I thought it was just going to be about falafel and hummus.”

That was the perception of Israeli cuisine that filmmaker Roger Sherman had when he reluctantly decided to accompany his friend, the acclaimed Jewish cookbook writer Joan Nathan, on a food tour of Israel in 2010. But the reality exceeded his expectations.

“I was blown away by what I consider to be the hottest food scene in the world,” Sherman told JTA in a recent interview. “I thought, this is the perfect subject for a film.”

It was. After a successful run on the festival circuit, Sherman’s documentary “In Search of Israeli Cuisine” — which attempts to define and explore what Israeli food actually is — opens March 24 in New York at Lincoln Plaza and the Angelika Film Center. It will open March 31 in Los Angeles, San Francisco and Philadelphia, with other cities to follow.

In general, “we don’t know anything about what goes on in Israel except for conflict,” Sherman said. “This is a portrait of the Israeli people through food.”

Sherman, whose previous documentaries include “Medal of Honor” (2008) and “The Restaurateur” (2010), said he usually avoids having hosts in his films — “I feel they get in the way between the subjects and the viewers” — but he wanted to change up the approach for this documentary.

“Israel is such a complicated place, I needed someone to help translate that situation,” he said.

After a trip from New York to check out Zahav, a Philadelphia restaurant that a friend described as serving the best Israeli food in the U.S., Sherman had the chance to meet the restaurant’s chef and owner, Michael Solomonov.

Sherman knew immediately that Solomonov would make the perfect chef-guide for his film.

The feeling was mutual — they agreed then and there to work together on the project.

A James Beard Award winner — that’s the foodie equivalent of an Oscar — Solomonov is also the owner of Philly’s Federal Donuts and Abe Fisher, a restaurant that focuses on Ashkenazi food. Through Zahav, his flagship, Solomonov is often credited for building the popularity of Israeli, Sephardic-style food in America and around the world.

Solomonov’s connection to Israel is deeply personal. He moved from there to Pittsburgh as a child, but returned as a teenager for a short time. His younger brother, David, was killed on Yom Kippur 2003 while serving in the Israeli army.

After the tragedy, Solomonov notes in the film, he became more interested in cooking foods that reflected his Israeli heritage, moving away from his classical European training.

“Attaching myself to the country and the culture and the food are things that have kept me going,” he said.

While Solomonov addresses his relationships with his family and the country in the film — he also shares a story about his grandmother’s bourekas — by and large he serves as an affable tour guide, giving Israel’s food experts and chefs a chance to shine.

Throughout the documentary, Solomonov dines on Israeli street food, upscale modern Israeli cuisine, Palestinian home cooking and everything in between. He comes across as an excited student of Israeli food, seemingly learning about some for the first time alongside the viewer. 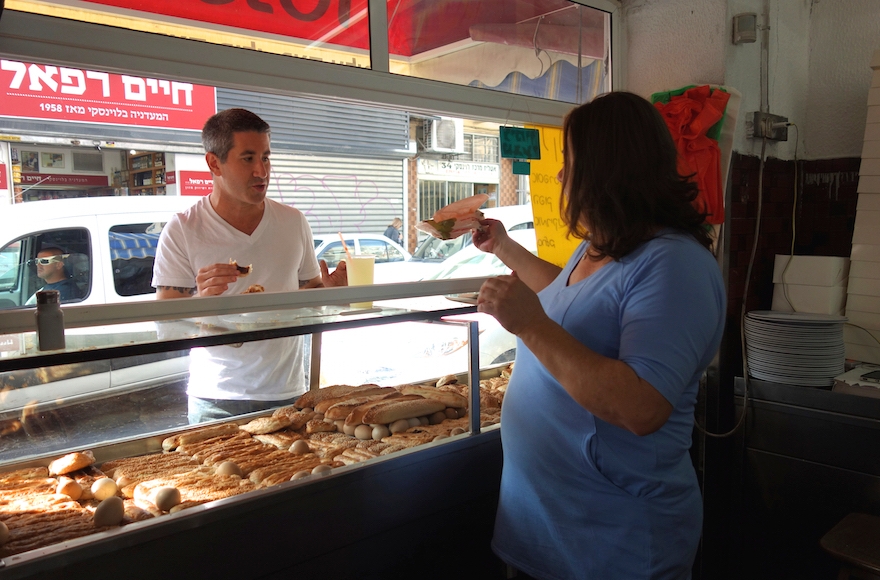 But “In Search of Israeli Cuisine” isn’t your typical travel-and-tasting exploration — it explores tough questions surrounding multiculturalism and pluralism. Solomonov, for his part, lends a sympathetic ear when his subjects tackle complex issues surrounding kashrut, Shabbat and the Israeli-Palestinian conflict.

The film demonstrates that while food is not inherently political, it can reflect larger social issues.

Take the central question of the film: What is Israeli food? The answer doesn’t prove simple.

At its core, Israeli cuisine is a combination of foods from over 100 cultures that have melded in Israel. It’s also something that comes from the land itself, which boasts a rich array of microclimates, and a product of the Palestinian people, who have also lived on the land for ages.

Some of the more poignant moments in the documentary come when Solomonov speaks to Palestinian chefs about the challenges of getting Israeli customers to frequent their restaurants and in working in all-Israeli kitchens.

Husam Abbas, the chef and owner of El Babor, in the Arab-Israeli town of Umm el Fahm, says — in perfect Hebrew — that political events have affected his restaurant.

“The Jews stop coming,” he said. But, Abbas added, “food is peace.”

“If you come to eat with me, and if you come to learn my food, maybe it’s going to bring us all together,” he said.

“Food can bridge gaps,” he told JTA in a telephone interview. “Especially when the traditional forms of diplomacy are not up to snuff, it’s clear the power food can have … on both sides of the aisle.

“These dishes that we’ve brought through our families and through generations stand for love, not violence. Feeding people is the opposite of alienation. I think future generations of chefs have to use that power. Food transcends the rest of it.”

Since the documentary was filmed in 2013, Solomonov has been back to visit many times. In fact, when he spoke to JTA last week, he was in the middle of running a food tour in Israel that’s tied to the film.

To provide a sense of just how wide an array of foods are “Israeli,” Solomonov expounded on what he ate that day.

“I just ordered a sabich [fried eggplant and hardboiled egg] sandwich at my hotel, which is technically Iraqi,” he said. “Later on tonight we’re going to have striper that was raised in a saltwater pond with a Turkish sunchoke puree. You stumble into those things naturally here.”

Asked whether he’s any closer to defining the amalgamation of cuisines that is Israeli food, Solomonov says he isn’t.

“It’s a convergence of the ancient and modern, since it’s a new country, but the cooking traditions in some cases are over 1,000 years old,” he said. “It’s really about putting all these cuisines together on one plate.

“Modern chefs are embracing Israel and looking at its bounty of cultures, flavors and tastes as influences,” he said. “They’re not going to Europe as much to learn haute cuisine, instead they’re saying they want to stay here and cook Israeli food.”

When prompted, Solomonov said it was hard to narrow down what three foods visitors to Israel should eat — but he did: “You have to have an Israeli hotel breakfast, a bowl of Yemenite soup and some kind of meat and vegetable skewer cooked over charcoal at one of the kebab shops,” he said.

Nonetheless, Solomonov and the film make the case that Israeli food isn’t just about taste — it’s about culture and connection, too. In a poignant scene, Erez Komarovsky, a noted Israeli cookbook author, restaurateur and breadmaker, makes shakshuka — a traditional pepper, tomato and egg dish — with Solomonov. Komarovsky chose that particular dish, he said, because it’s like Israel and its people: “It’s hot and it’s not stuffy.”

“Food is not political,” he added. “It is what is grown on this land by the people who are are living in it. If they are called Palestinians or Israelis, I don’t think the tomato[es] care.”

This new kosher deli may be Miami’s hippest restaurant