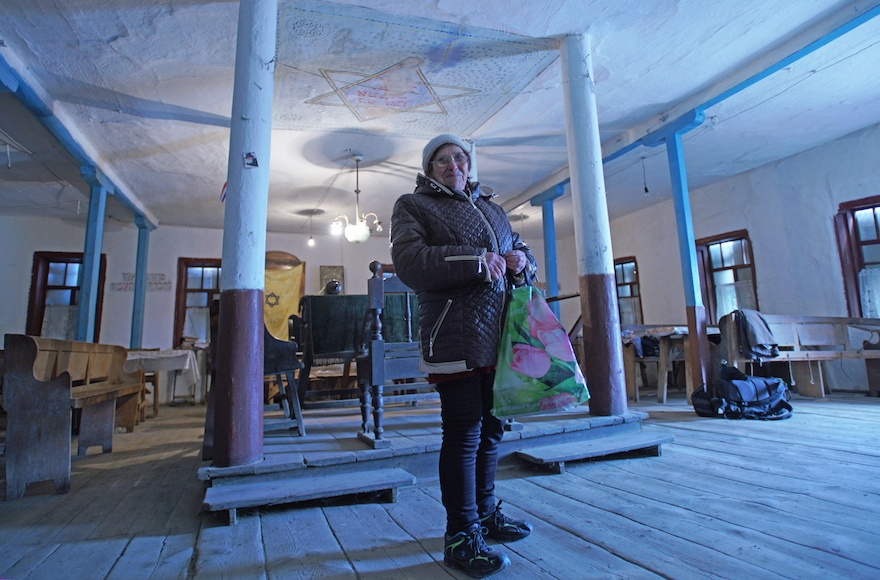 BERSHAD, Ukraine (JTA) — At first glance, this drab town 160 miles south of Kiev seems nearly identical to the settlements that dot the poverty-stricken district of Vinnitsa.

And like many far-flung Ukrainian towns, Bershad, too, has a small, aging Jewish population. The Jews persist here even though almost all of their relatives are living in the relative comfort of Israel or the United States.

But there is more to Bershad than meets the eye.

A closer look at its unique history and architecture reveals something incredible: Bershad is one of Europe’s last remaining shtetls. This town near the Moldavan border, with a Jewish population of 50, is a living testament to the Jewish community’s incredible survival story — one that has endured despite decades of communist repression, the Holocaust and the exodus of Russian-speaking Jews.

Nowhere is the uniqueness of this Jewish community more evident than the Bershad synagogue, which was built from clay 200 years ago.

Incredibly, Soviet authorities returned the white, two-story, tin-roofed building to the town’s Jewish community in 1946, shortly after the Red Army liberated present-day Ukraine from the grip of Nazi Germany and its allies. It was a highly unusual move in a secularist empire that under Joseph Stalin systematically nationalized property of faith communities and routinely persecuted Jews who insisted on practicing their religion.

Coming on the heels of the Nazi genocide, this Soviet policy was a death blow to Jewish life throughout Ukraine’s countryside — once the home of thousands of shtetls — and severely limited it in the large cities. Yet “at a time where communist repression ended the existence of the few shtetls that by some miracle survived the Holocaust, the existence of a working synagogue in Bershad was the axis of communal life for this shtetl,” said Yefim Vygodner, 64. The town had a Jewish population of some 3,500 in the 1960s.

Vygodner is the leader of Bershad’s Jewish community — and its youngest member.

Over the decades, the relatively privileged status of Bershad Jews – Vygodner attributes it to a combination of luck, remoteness, resilience and friendly ties with non-Jewish neighbors — became most apparent on Passover and Yom Kippur, he said, because on those holidays Judaism came out of the home and into the synagogue.

In an interview this month, Vygodner told JTA how, when he was a boy, his mother would send him to a makeshift matzah bakery that opened each year in front of the synagogue. In the weeks before Passover, the smell of baking matzah wafted along the shtetl’s muddy streets, he recalled.

“The baker would scoop out of the oven wavy, handmade matzah and wrap [it] up in paper for each client individually,” Vygodner said. “I didn’t even know that matzah was also mass produced.”

Bronia Feldman, a jovial 79-year-old, recalled another scene from Jewish life in Bershad: Every Yom Kippur, her mother would take her to the square opposite the synagogue, where hundreds of Jews would gather to hear the shofar — the culmination of Judaism’s solemn Day of Atonement.

“Those with sensitive jobs, teachers and doctors, didn’t go into the synagogue because they didn’t want to get in trouble,” Vygodner said of the communist years. “They just hung around the synagogue.”

On Passover, though, “everyone ate matzah – doctors, teachers, engineers – everyone,” she said.

Vygodner and Feldman’s accounts are highly unusual for Jews their age who grew up in the former Soviet Union, where Judaism was practiced in secret, if at all.

The key to Bershad’s survival was its western location: In 1941, its region fell under the occupation of Romanian fascist troops, who were less methodical about murdering Jews than their German allies. They liquidated neighboring shtetls and turned Bershad, which in 1939 had a Jewish population of 5,000, into a central ghetto with 25,000 prisoners. Many perished, but 3,500 Bershad Jews survived.

One of them is Alxander Zornitskiy, 83, a retired veterinarian and an author, who hid with his mother and two sisters as German soldiers killed 2,800 people in their nearby shtetl of Ternovka. With help from non-Jewish locals, the family made it to Bershad, where they lived in crowded conditions and without enough food in one of the two-room wooden houses that made up the Jewish quarter.

“The Romanians were cruel, but they didn’t shoot us,” he summarized. “Every street here reminds me of the Holocaust. But it’s also where I survived.”

After the Holocaust, the consent — or at least silence — of Bershad’s non-Jews was crucial to maintaining the town’s Jewish spiritual life.

“This is where centuries of coexistence played a role,” Vygodner said.

Unlike their more intellectual coreligionists from big cities, he added, Bershad’s Jews were blue collar: metal workers, shoemakers, carpenters and fishermen, whose families for centuries had worked shoulder to shoulder with non-Jews.

The matzah bakery closed in the 1980s. By 1989, Bershad’s Jewish community comprised 1,000 members – half its size from a decade earlier.

Today, Bershad’s remaining Jews celebrate a communal seder at the synagogue organized by Chabad. They also come here year-round to receive food packages courtesy of the Christians for Israel charity group. Yakov Sklarsky, who owns the town’s only photo studio, functions as rabbi most of the year. His credentials are his ability to sing and read, if not understand, Hebrew. 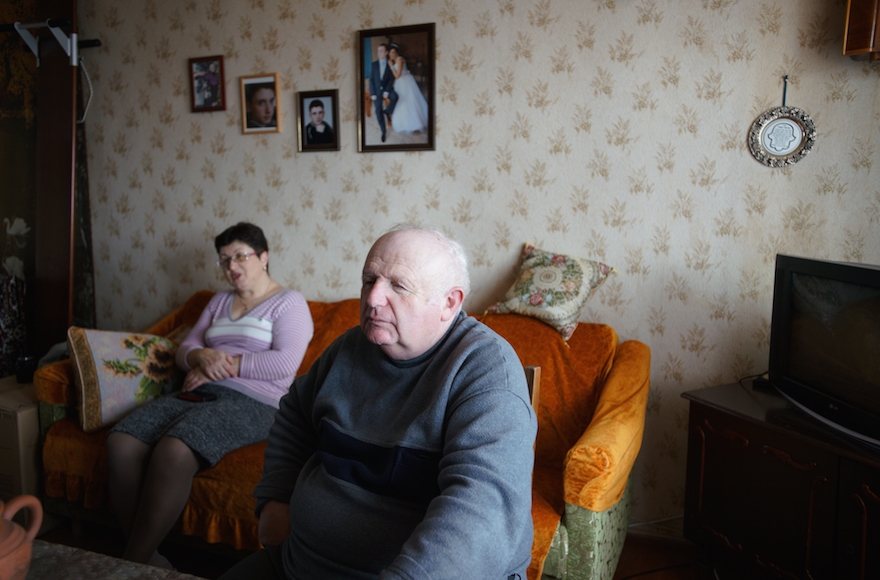 Yefim Vygodner and wife Tamara at their home in Bershad, March 9, 2017. (Cnaan Liphshiz)

The Torah scroll in the synagogue is not kosher. The shul itself, which Vygodner said functions more like a community center than a house of worship, rarely gets a minyan, the quorum of 10 men required for some prayer services in Orthodox Judaism. Its Star of David ceiling fresco remains, but its façade is peeling, revealing the clay and hay makeup of its walls. The women’s section has been transformed into a storage area.

Even so, it is one of the best-preserved buildings of the old shtetl, boasting a new tin roof and a fresh coat of white paint.

Most of the houses that surround the synagogue, which is at the heart of Bershad’s Jewish quarter, are uninhabitable, left to disintegrate by Jewish owners who immigrated to Israel, the United States or Kiev, but were unable to sell the land in one of Ukraine’s poorest areas. The yards are filled with junk and packs of stray dogs.

Many of the houses have a front porch that Vygodner says was an amenity favored  by shtetl Jews. Some even have mezuzah markings on the peeling paint of their door frames.

But members of the Jewish community here, for their part, are not complaining. Feldman says she is happy to have a synagogue – an institution that few other towns of Bershad’s size can boast in Ukraine – and feels “lucky to have Yakov as our rabbi.”

Despite the local pride Feldman, the last remaining Bershad Jew whose mother tongue is Yiddish, is contemplating leaving.

“I have a sister in Ashdod, and I’m thinking of joining her,” she said of the Israeli city, adding that her main reason for staying is her daughter, Maya, who lives in Bershad.

As for Vygodner, his son left for Israel five years ago. But he and his wife, Tamara, won’t be joining him anytime soon.

“I don’t think Israel is holding its breath for me,” he said. “Besides, living here is an acquired taste and I’m set in my ways. I have my community here, my place.”